The following manual was originally posted online to the file-sharing website 4shared. 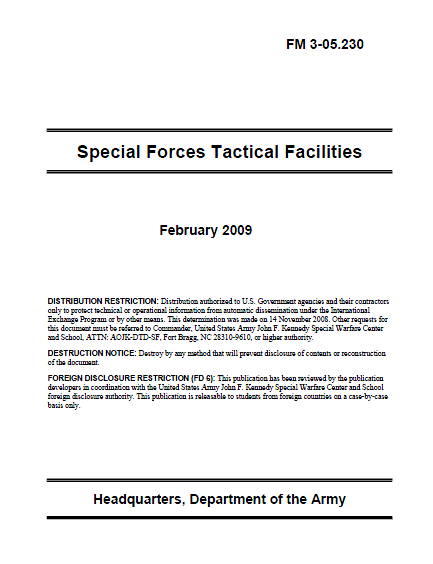 As with all doctrinal manuals, FM 3-05.230 is authoritative but not directive. It serves as a guide but does not preclude SF units from developing their own standing operating procedures (SOPs) to meet their needs. This FM focuses on the establishment, improvement, operations, and security of SF TACFACs.

The primary role of the SF TACFAC is to support special operations (SO) and function as a tactical and operational base. As such, TACFACs serve a primarily defensive function, although they may serve as bases for needed offensive operations. The secondary role of the TACFAC is to be a center that develops, nurtures, and maintains liaison with local host-nation (HN) populace and members of the HN military and civilian leadership. This role is critical in foreign internal defense (FID) and counterinsurgency (COIN) operations.

Over time, the TACFAC helps provide for establishment, restoration, and improvements of many local HN community and governmental services and systems. These essential support systems for the TACFAC and surrounding HN communities are best captured by the acronym SWEAT-MSS (security, water, electricity, administration, trash, medical, sewage, and shelter). Eventually, the SF TACFAC will be returned to the control of the HN government through a relief in place (RIP).

1-1. SF operations support the operations and goals of the geographic combatant commanders (GCCs) and their subordinate joint force commanders (JFCs). SF TACFACs primarily serve as a base to support SF operations. As such, they serve an operationally defensive role. They allow SF units and partnered HN or multinational forces to meet the tasks and purposes of the defense and aid in setting the conditions for successful offensive operations, which can be either lethal or nonlethal. FM 3-0, Operations, defines defensive operations as “combat operations conducted to defeat an enemy attack, gain time, economize forces, and develop favorable conditions for offensive or stability operations.”

1-2. Several of the purposes of defensive operations are very closely related to SF TACFAC operations. These purposes include the following:

1-3. SF TACFAC operations also can have a tremendous positive impact in support of friendly information operations (IO), as TACFACs are tangible proof of a stabilizing friendly-force presence. In order for U.S. Armed Forces—and SF in particular—to have any positive effect on the local population’s view of their government, local critical assets and infrastructure must be defended. These assets and infrastructure usually have more economic and political value than tactical military value.

1-4. Prior to selection of the TACFAC site, the Special Forces operational detachment (SFOD) must analyze the mission, enemy, terrain and weather, troops and support available, time available, and civil considerations (METT-TC). When planning and designing the TACFAC, the SFOD must take into account the factors critical to the security of the facility, including observation and fields of fire, avenues of approach, key terrain, obstacles, and cover and concealment (OAKOC). The SF TACFAC commander uses all available assets during defensive planning. These include intelligence, reconnaissance, and engineer assets to study the terrain. Optimum use of terrain, depth, and security operations allows the SFOD to minimize defensive resources.

1-5. The smallest SF unit tasked to operate and maintain an SF TACFAC is the SFODA. SFODBs and SFODCs that occupy TACFACs produce much larger tactical footprints in their areas of operation (AOs), which may be a distinct disadvantage. The larger advanced operating base (AOB) or special operations task force (SOTF) TACFAC needed to sustain a greater force requires additional logistics and protection support.

1-6. SF units must determine if there are advantages or disadvantages to breaking ground on a new facility or using an existing facility. Questions that are considered when making this decision include the following:

1-7. In addition to the SFOD (or SFODs) occupying the TACFAC, the facility may also house vetted interpreters and other friendly force personnel on either a permanent or temporary basis. These friendly forces may include other U.S. or multinational force personnel (military, interagency, or contractor), HN personnel (military, constabulary, or civilian government), or irregular forces working with the SFOD. The SFOD must take into account both the size of these elements and any cultural considerations related to these various groups when developing a TACFAC. 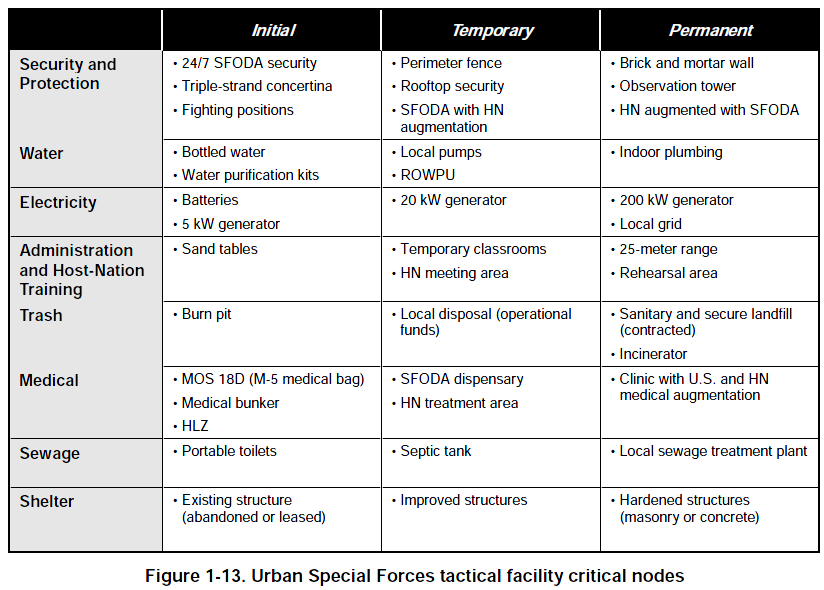