The following manual was uploaded to Scribd earlier this month by an unknown individual. 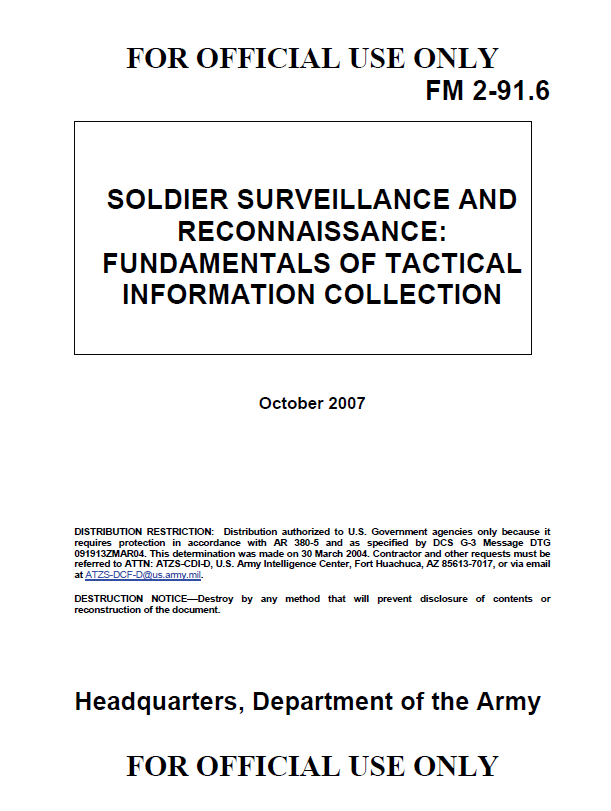 This publication establishes the Army’s doctrine in support of the Every Soldier is a Sensor (ES2) initiative. The need for Soldiers to be aware that basic observations are an important part of operations has led to the development of this manual.

• Provides the doctrinal framework for Soldiers and leaders at all echelons and forms the foundation for ES2 curricula within the Army Education System. Its audience is broad, from military Soldiers and leaders to civilians. It is essential that all Soldiers and civilians understand how their daily observations feed into the bigger intelligence process and help create a more favorable environment for US success in a region.
• Is a compilation of tools to help all Soldiers collect information through tactical questioning, detainee handling, and document and equipment handling in offensive, defensive, stability operations, and civil support operations.
• Is not intended to make the Soldier an expert on intelligence collection. It is not intended to train Soldiers as intelligence collectors nor authorize Soldiers to conduct interrogation and source operations.
• Introduces the basics of questioning and reporting and provides some tools for patrols and S-2s.
• Applies to the Full Spectrum Operations. Principles outlined are valid under conditions involving use of chemical, biological, radiological, nuclear, and high yield explosives (CBRNE).

This manual is a compilation of tools to help all Soldiers collect information through surveillance, reconnaissance, patrolling, interacting with the local populace, tactical site exploitation, tactical questioning and detainee handling, briefing, debriefing, and reporting in offensive, defensive, stability operations, and civil support operations. Most of the text was developed specifically for patrols and to conduct traffic control points (TCPs) or roadblocks, and other missions where Soldiers will interact with the local populace including site exploitation and tactical questioning after a planned or hasty raid. The term “patrol” could reflect a platoon, section, fire team, or other special-purpose group given a mission as listed above. 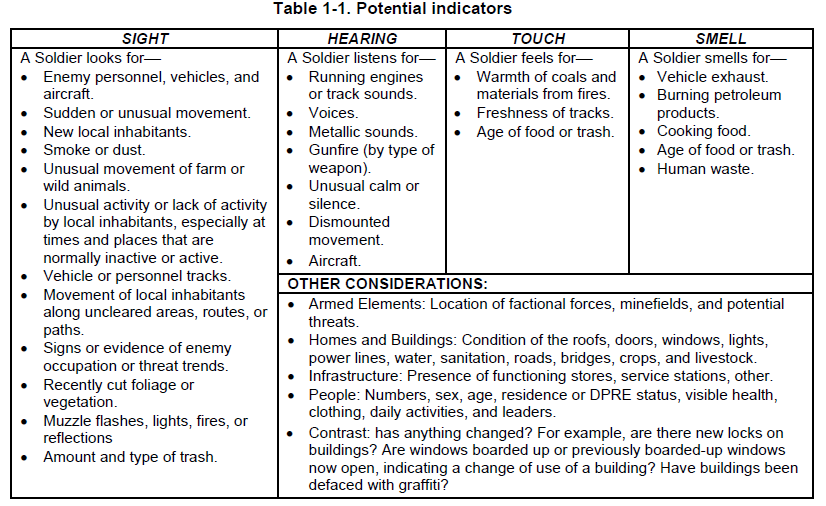 3-35. When conducting tactical questioning, it is imperative that the provisions of the Geneva Conventions (FM 27-10) be followed at all times. When possible, obtain as much information as needed through tactical questioning in order to exploit perishable information (for example, another insurgent operation occurring at the same time, the current location of a known HVT). Personnel talked to are not to be mistreated in any way:

B-25. Soldiers should cover the following in preparing for interviews:

CONDUCTING AN INTERVIEW
B-26. Soldiers should cover the following when conducting an interview or presenting a lesson: