The following manual was originally posted online on the file-sharing website 4shared. 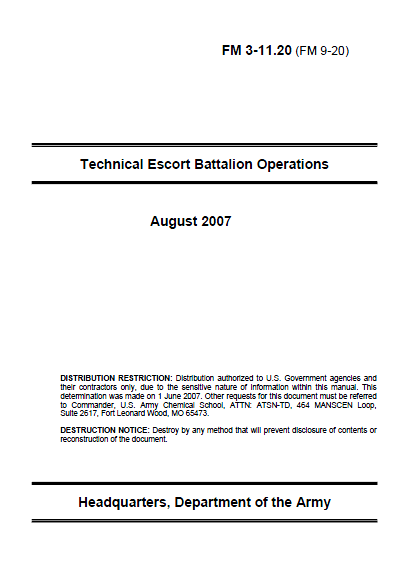 1-3. TE battalions are organized into CBRN teams and remediation and restoration teams (RRTs).

2-4. The Department of Homeland Security (DHS) is the LFA for crisis and consequence management. DOD support to DHS includes (1) identifying, assessing, dismantling, transferring, and disposing of a contaminant and (2) conducting decontamination operations. Additionally, incidents involving CBRN environments often require a response according to a specific federal emergency operations plan, such as the National Response Plan (NRP), the National Oil and Hazardous Substances Pollution Contingency Plan (commonly referred to as the National Contingency Plan [NCP]; Title 40, Code of Federal Regulations [CFR] 300), or the Federal Radiological Emergency Response Plan (FRERP). These plans designate an LFA to coordinate the federal response, and the type of emergency determines the LFA. In general, an LFA establishes operational structures and procedures to assemble and work with agencies providing direct support. (Appendix A lists the LFA for each of the emergency support functions [ESFs] designated in the NRP.)

• Domestic emergencies.
• Designated law enforcement within the scope of restrictions required by 18 USC 1385 (the Posse Comitatus Act).
• Other incidents approved by the Secretary of Defense.

8-8. Support must be consistent with military readiness, DOD directives, and the law. The employment of military forces within the United States and its territories and possessions under the auspices of civil support typically falls under the broad mission of military assistance to civil authorities. This mission consists of three mission subsets:

8-9. As directed in Homeland Security Presidential Directive (HSPD) 5, DHS is the LFA for CBRN crisis management and consequence management. DOD supports DHS by identifying, assessing, dismantling, transferring, and disposing of contaminants and by conducting decontamination operations. Additionally, an incident involving CBRN contamination is likely to require a response according to a specific federal emergency OPLAN (such as the NRP, NCP, or Federal Radiological Emergency Response Plan). These plans designate an LFA to coordinate the federal response depending on the type of emergency. In general, an LFA establishes operational structures and procedures to assemble and work with agencies providing direct support to the LFA.