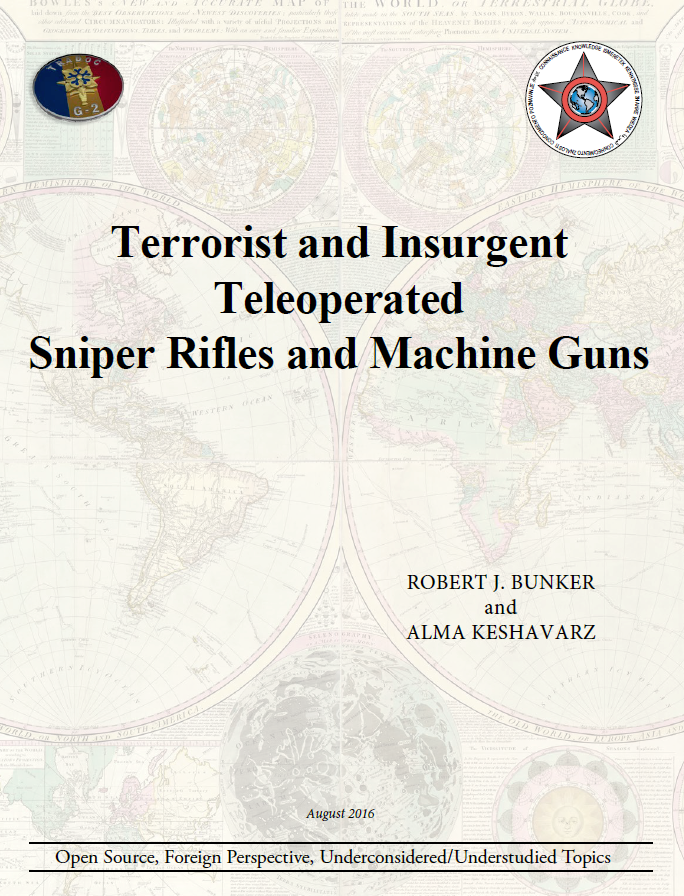 This data set consists of twenty-one teleoperated weapons systems used by terrorist and insurgent groups. It is worth noting that there are many more systems’ images available, but no group affiliation could be associated with them, which is why they were not included in this research project. The plethora of videos and photos on social media indicates that terror and insurgent groups are increasingly turning to improvised weaponry use on the battlefield. One class of improvised weapon that is emerging is remote controlled sniper rifles and machine guns. They are being used across Syria, Iraq, and a lone case in Libya as early as 2011. Typically, rifles or machine guns are improvised to be secured on a base—either mobile or stationary—and linked to cables, which are connected to a remote and screen. Some systems are more refined than others, such as with cameras, but all have at least proven to be somewhat effective. The Free Syrian Army (FSA) was at the forefront of using improvised weaponry for the better part of 2013, based on what is still available on social media. But other rebel groups as well as Islamic State and Al Qaeda affiliates caught on to the trend quickly. In early 2016, videos and Twitter images even surfaced of improvised weaponry developed by Iraqi military forces. There is a level of sophistication and practicality of these groups to use what is available and create a weapon that can cause a great deal of damage. Social media outlets like Twitter, Facebook, and YouTube take down undesirable content periodically, but the majority of these system videos have remained online.

While there is an abundance of teleoperated weapons in the hands of Islamic militants, they are certainly not of the quality one would see fielded by developed nations with sophisticated research and development teams. In Daejeon, South Korea, engineers developed a belt-fed .50 caliber machine gun turret known as the Super aEgis II, which was unveiled in 2010 and has since been improved as of 2016. An Ethernet cable runs from the turret’s base to the back of a computer with the rifle controlled by a joystick. With a four-kilometer engagement range, the joystick gives the operator the ability to maneuver the weapon and aim, while adjacent buttons control distance, chamber loading, and firing. The system will not fire without the command from a human operator. The Super aEgis II costs $40 million and has had a number of buyers, mostly in the Middle East: airbases across the United Arab Emirates, the Royal Palace in Abu Dhabi, and an armory in Qatar. Others have purchased the system for use at airports and military bases. This is the most recent debut by South Korea who have also created more improvised—and less costly—weaponry to protect their border with North Korea.

Similarly, Israel has developed a slew of improvised weaponry, given its unfriendly neighbors. Israel is under constant threat of Hezbollah and Palestinian militants in the Gaza Strip. In 2010, Israel made headlines with its female-only operated “spot and shoot” technology. Officially known as “SentryTech,” the system resembles a video game. A mounted weapon can be operated by a remote control and targets are spotted on a computer screen. Additionally, as early as June 2016, Israel debuted small “combat robots,” which can climb stairs and maneuver through almost any terrain. The mini-robot is also capable of carrying a fully loaded Glock with 14 rounds. Called Dogo, it weighs a little over 25 pounds, has eight cameras to provide a 360-degree view, and possesses enough battery life for up to five hours of operation.

Russia is also building up its teleoperated technological arsenal. At the beginning of 2016, the Russian military developed a remote controlled 30-mm auto cannon turret. The system is called ABM M30-M3, developed by Impuls-2, a Crimea based firm. It can be linked with Strazh-m, which is a computer system to remotely control the turret as well as assist with tracking and targeting. The system can be as far as 50 kilometers away from the turret for it to be remotely controlled by an operator. The turret can be installed on warships, military boats, and armored vehicles. Additionally, the Russians have built Uran-9, which is used mainly for reconnaissance. It is not necessarily an improvised rifle like the previous example, but it is an improvised tank that is unmanned and can be remotely controlled. Uran-9 was developed by Rosoboronexport, a Russian defense contracting firm. The turret attached to this armored vehicle is a 30-mm cannon that has a rate of fire of up to 400 rounds per minute. A 7.62mm machine gun is also mounted adjacent to the cannon. Interestingly, the tank consists of four 9M120 Ataka anti-tank missiles and four Igla-S surface to air missiles. Russia has reported that they intend on exporting this mini-robot tank for missions abroad.

With the context provided, the accompanying teleoperated weapons data set serves as a baseline resource concerning emerging terrorist and insurgent capabilities in this area. It has been pieced together drawing upon open source social media and news reports to provide insights into an understudied operational environment threat that has been gradually developing in the Middle East. 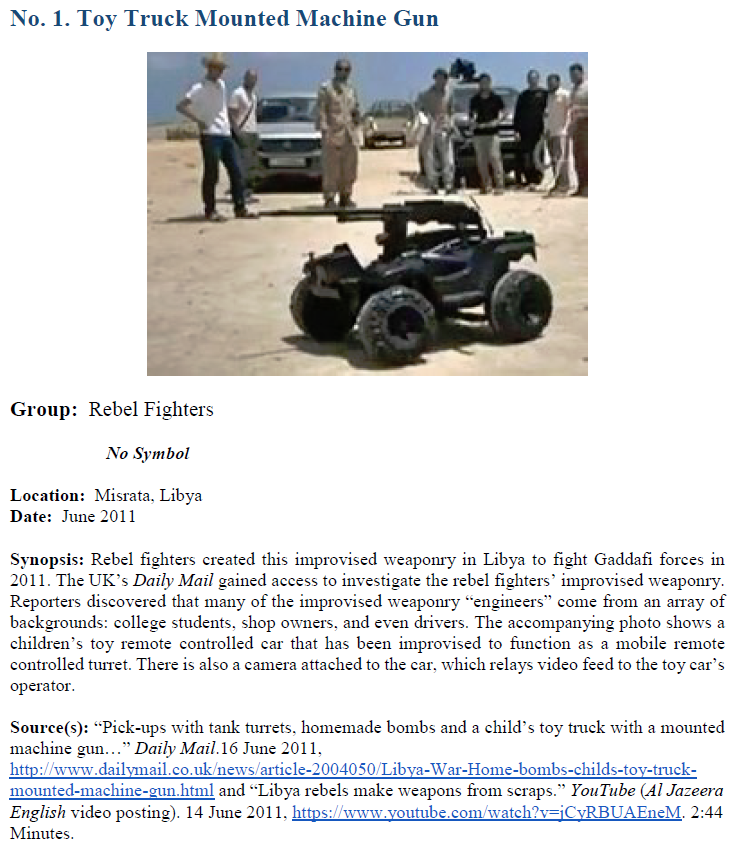 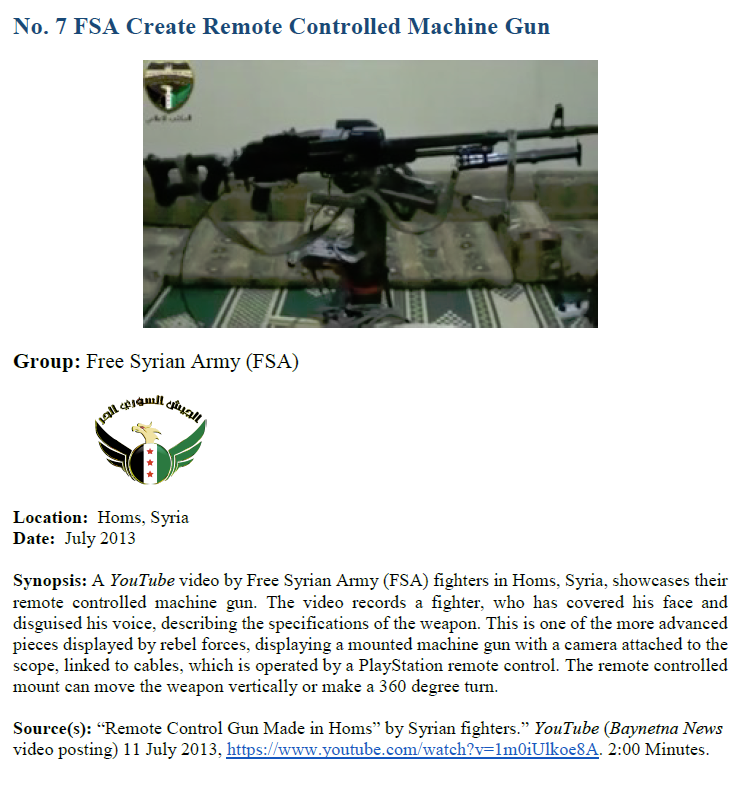