Restricted U.S. Army Training for Reconnaissance Troop and Below in Urban Operations 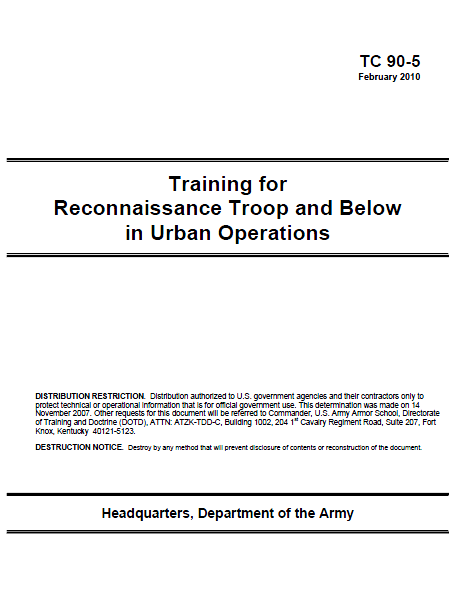 Because the operational environment (OE) requires Army forces to operate in urban areas, commanders must have accurate information on the complex human elements, infrastructure, and physical terrain that make up the urban environment. The limits on imagery and electronic reconnaissance and surveillance (R&S) capabilities place a premium on human-based visual reconnaissance. Reconnaissance troops and platoons must be trained to gather and analyze the necessary information and provide it to their commanders and higher headquarters. This chapter discusses definitions, training strategy, prerequisite training, individual task training, and collective task training designed to prepare reconnaissance units at troop level and below for operations in urban terrain.

1-26. See FM 3-06.11 for a review of additional tasks related to stability operations and civil support operations. These include, but are not limited to, the following: 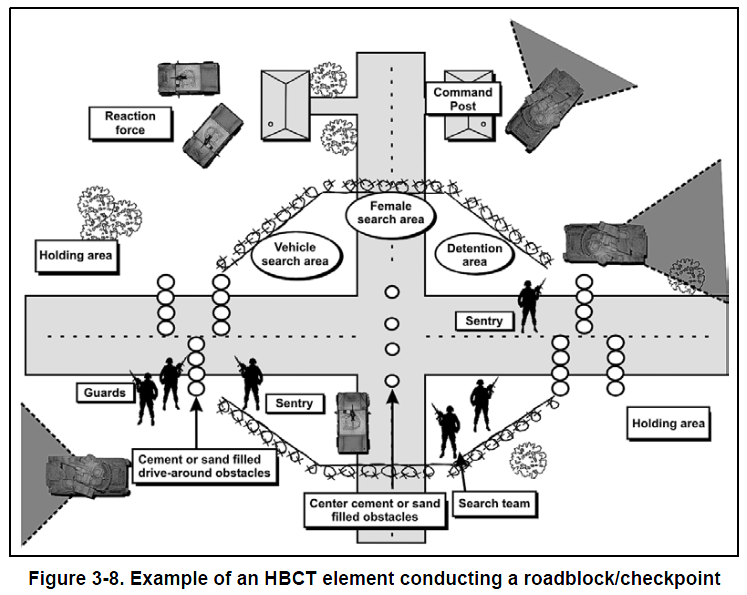 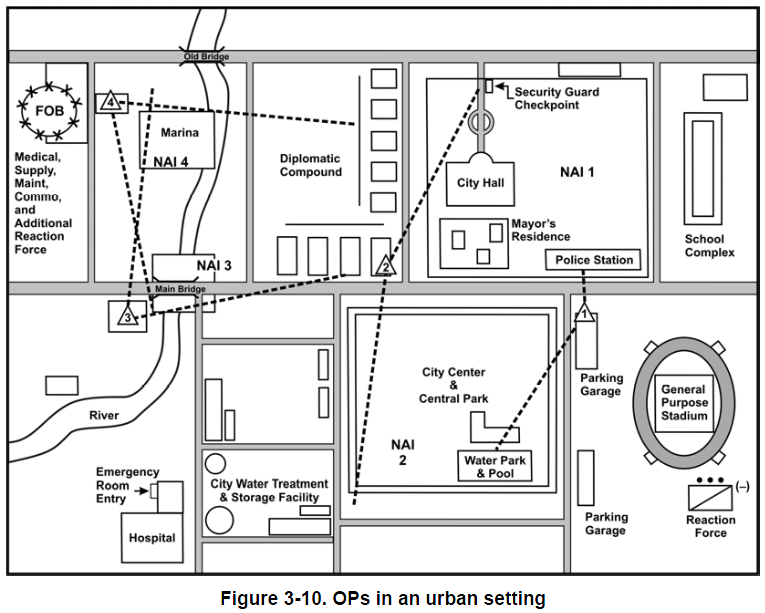 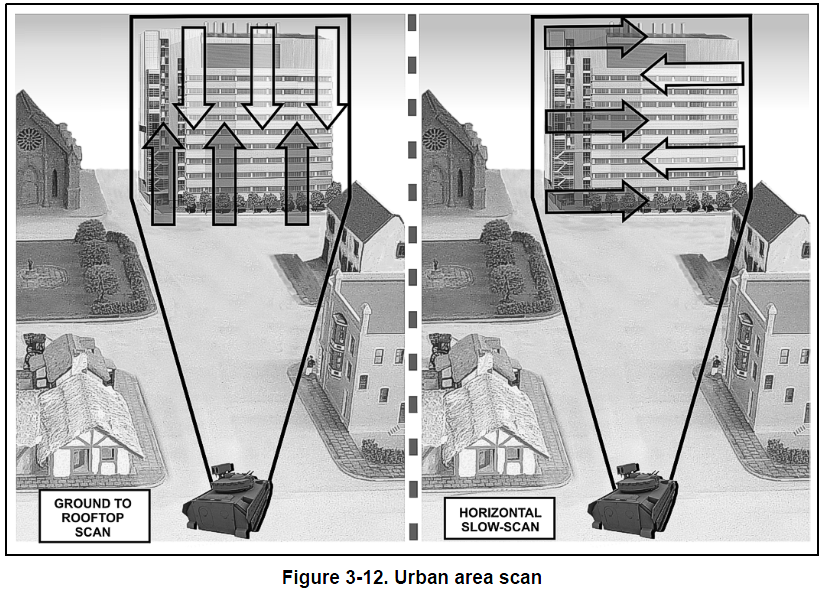 3-60. The likelihood of civil disturbances during urban operations is high. Handled poorly, the reaction to a civil disturbance can quickly escalate out of control, with potential long-term negative effects for mission accomplishment. Conversely, a well-handled situation will lead to an enhanced view of the reconnaissance platoon’s discipline and professionalism and potentially could result in fewer such incidents in the future.

3-61. Table 3-9 lists the supporting tasks that must be accomplished as part of controlling civilian movement and disturbances.

3-62. A possible TTP description for this task is covered by procedures known by the acronym of IDAM:

3-63. The first step entails isolating, in time and space, the trouble spot from outside influence or interaction. Unit tactical operation centers in the theater must develop TTP that “isolate” riots or demonstrations to keep them from becoming larger and potentially more violent. The idea is to close access into and out of the demonstration location (Figure 3-13). Once access is closed, rioters tend to tire within hours, and the demonstration dies down, eventually resulting in a peaceful conclusion. Figure 3-14 provides a technique for positioning several tiers of checkpoints and tactical control points, given the mission to isolate a riot. Controlling major road networks into and out of the demonstration area also serves to enhance trafficability if the riot escalates.

3-64. Units dominate the situation through force presence and control of information resources. They can demonstrate an overwhelming show of force at command posts (CP) and dispatch helicopters to conduct overflights above demonstrations and massing civilian mobs. In addition, use of appropriate air assets can give commanders a bird’s-eye view of events, providing real-time updates on the situation and ensuring that units know the “ground truth” at all times. This knowledge gives commanders a decisive advantage both in negotiations with potentially hostile elements and in tactical maneuvers.

3-65. The following factors apply for the platoon in attempting to dominate the situation: 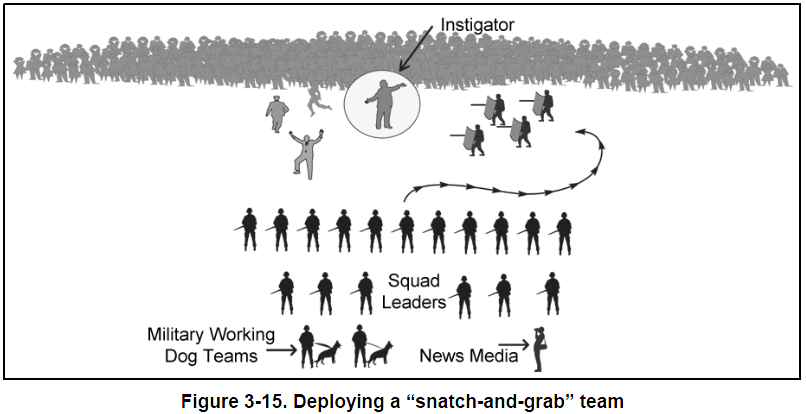 3-66. Commanders and leaders maintain SA through timely, accurate, and complete multisource reporting. They can receive reports from a broad spectrum of sources. Unit CPs, air assets, and close liaison with HN police, NGOs, PVOs, and other civilian agencies all contribute to an accurate assessment of any situation. In addition, UAS, such as the Predator and Pioneer, are effective in observing large sectors of an AO. Analyze the reports produced and relay them to each unit involved in the operation.

3-67. As part of the IDAM procedures, multidimensional/multiechelon actions may entail the following considerations:

5-33. The smallest organizational PSYOP element is the tactical PSYOP team (TPT), consisting of three Soldiers. In high-intensity conflict, the TPT normally provides PSYOP support to a squadron. During counterinsurgency (COIN) and stability operations, planning and execution are primarily conducted at the troop level because the troop is the element that most often directly engages the local government, populace, and adversary groups. Operating in the troop AO allows TPTs to develop rapport with the target audience. This rapport is critical to the accomplishment of the troop’s mission. The TPT chief, usually a SSG or SGT, is the PSYOP planner for the troop commander. He also coordinates with the tactical PSYOP detachment (TPD) at the squadron level for additional support to meet the troop commander’s requirements. PSYOP planning considerations include the following: