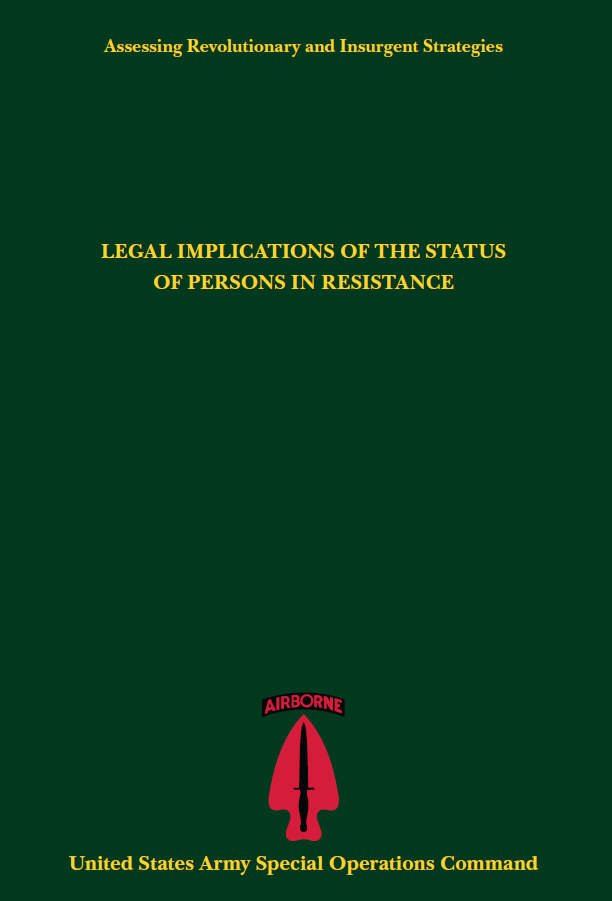 Legal Implications of the Status of Persons in Resistance

The purpose of this study is to provide a synthesis of the prevailing issues and analysis concerning the legal status of persons in resistance. This document refers broadly to resistance and those involved in it, meaning those individuals comprising the resistance element, US personnel supporting or countering the resistance, and the standing government. In alignment with this focus, the document explores the status of personnel particularly in foreign internal defense (FID), counterinsurgency (COIN), and unconventional warfare (UW) operations. When originally conceived, this manuscript was to be an updated volume of the 1961 American University Special Operations Research Office (SORO) study, The Legal Status of Participants in Unconventional Warfare. The National Security Analysis Department (NSAD) of the Johns Hopkins University Applied Physics Laboratory (JHU/APL) was asked by the US Army Special Operations Command (USASOC), G-3X Special Programs Division, to review and analyze the historical use of international law, the law of land warfare, and applicable international conventions and update the SORO study accordingly and also include unique legal considerations regarding the status of irregular forces. Because many aspects of both law and policy have changed since the 1961 publication, particularly within the context of US involvement in Afghanistan and Iraq, USASOC requested that this manuscript be a new document to account for these changes, highlight key legal questions, and position these questions within the context of hypothetical scenarios and historical examples.

The study is intended to provide for nonlawyers an assessment of current law and policy regarding the status of persons in resistance and to identify issues where the interpretation or application of the law is unclear or unsettled. A key objective of this work is to present the reader with an understanding of the existing thresholds where status can change on the basis of the nature of the activity and the category of the conflict. It seeks to impart an understanding of the limitations of these thresholds as applied to operationally relevant examples within FID, COIN, and UW. Complex internal hostilities often involving armed and organized nonstate actors are replacing traditional interstate armed conflict. The constituent activities of irregular warfare (IW) may be used to counter or influence these hostilities, which may not have an obvious start or finish and often lack clarity regarding the status of those involved. The actions are unlikely to fall neatly within prevailing definitions of armed conflict—in other words, international or noninternational (internal)a conflicts recognized within international law—yet they exhibit many similarities. There are only a few meaningful distinctions in the law regarding the status of actors in activities outside of declared war. Conflict paradigms are changing, and existing legal instruments, such as the Hague Conventions of 1907 and the Geneva Conventions of 1949, do not adequately account for these changes—for example, nonstate groups engaging in prolonged campaigns of terrorism or states seeking to address these threats outside of traditional warfare. As such, an adaptive framework for applying existing law to these scenarios and understanding the limitations of that adaptation is necessary. For the purposes of this document, the framework for exploring these issues is resistance and the categories of hostilities that fall within it.

A resistance may find working within the law difficult or ineffective. It may decide to deliberately violate the law in a nonviolent way to instigate social change. Commonly referred to as civil disobedience, this method may be direct or indirect. A direct approach focuses on the violation of what is considered an unjust law—for example, Rosa Parks’s refusal to comply with the Montgomery segregation ordinance was a protest of the law itself. Indirect civil disobedience refers to acts where the law that is broken is not the object of the protest, but disobedience of the law is a method to bring attention to the demands of the resistance. In either case, the objective of civil disobedience is to break the law in order to further the agenda of the resistance, accepting the fact that breaking the law requires submission to the penalty.

The civil rights movement in the United States made use of both lawful and unlawful nonviolent practices. Through lobbying and lawsuits, organizations such as the National Association for the Advancement of Colored People (NAACP) expanded the rights of blacks and successfully won courtroom battles against the “separate but equal” doctrine. At the same time, “Freedom Riders” were arrested for violating statutes banning them from sitting in the white section of buses, and sit-ins took place at “whites-only” lunch counters across the South, resulting in violent reactions from segregationists. The nullification of the “separate but equal” doctrine, the eventual desegregation of schools, and the passage of the Civil Rights Act of 1964 are testaments to the effectiveness of nonviolent resistance. The civil rights movement influenced other concurrent and emerging nonviolent resistance movements, particularly in Africa. Owing to the need to examine the involvement of the US military, an instance of foreign nonviolent resistance that uses illegal acts will serve as a more useful scenario for analysis.