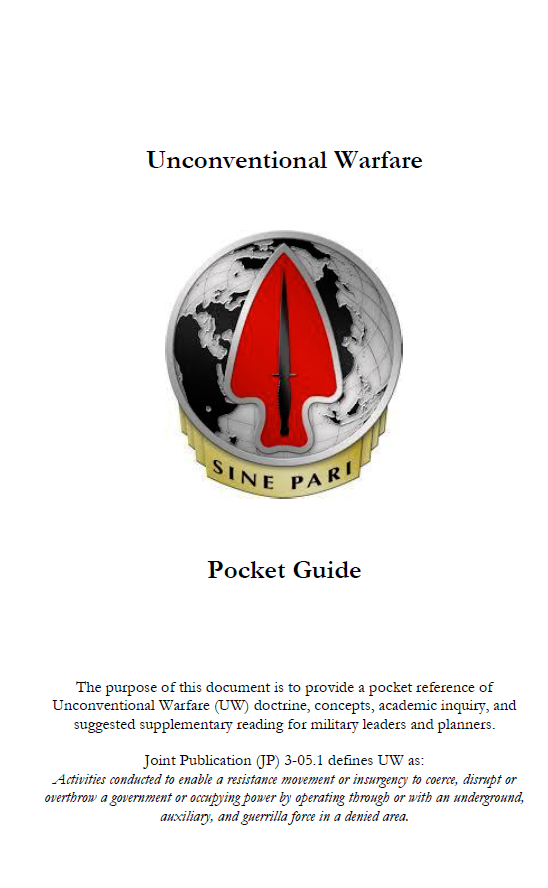 The term UW often elicits strong responses both negative and positive, though many have a fundamental misunderstanding of the term itself, and its application supporting U.S. policy. Simply, UW is the support to a resistance movement. Historically and most often, the U.S. supported a semi-organized militarized irregular force — known in doctrine as a Guerrilla Force, as part of an insurgency — such as the U.S. support to the Afghanistan Northern Alliance in 2001. This is most often due to a foreign policy decision on when to get involved.

However, the application of UW is much broader and adaptive. The methods and techniques used and the planning for the operations are dependent on the state of the resistance movement, environment, and the desired end state. Support to a resistance organization in its incipient state requires significantly different planning and support than one in the war of movement state (using Mao’s phases). The first will most likely be small, very sensitive, longer in duration, and often conducted under Title 50 authority, whereas the latter is large scale and open, as with the Northern Alliance in 2001.

Thus to prepare and train a force to conduct UW writ large, the theoretical construct must encompass all developmental states of the resistance; numerous environments, ideologies and circumstances; and account for all possible paths to a desired end state. The straw man and scenarios discussed in doctrine are not prescriptive but descriptive of a comprehensive campaign necessary to explore all possibilities, and their applicability.

UW has a wide range of applications in the contemporary environment, whether a textbook approached operation supporting the Syrian resistance, preparing a partner state ahead of potential occupation, or enabling a tribal group to resist Da’esh occupation in an Iraqi city. Special Operations Commanders must understand UW theories, principle, and tactics, and adapt them based on circumstance, the resistance, the opposition, and the desired end-state. This guide will help commanders and their staffs to find the relevant information necessary to understand and conduct UW.

The focus in UW is on the indigenous resistance elements, not U.S. force structures and procedures. UW falls within the construct of Irregular Warfare (IW) and is one of U.S. Special Operations Command’s (USSOCOM) Core Activities. USSOCOM Directives 10-1cc (U) and 525-89 (S//NF) establishes USASOC as the Lead Component for UW. This directive also describes the SOF service component capabilities and tasks for UW.

Components of a Resistance

Indigenous populations engaged in resistance are composed of the following primary components: the underground, auxiliary, guerrilla forces, public components, shadow government, and a government-in-exile. The goals, objectives, and success of the resistance will determine the level of development and relationships among the components.

The underground and guerrillas are politico-military entities that may conduct both political and military acts, and which represent the ends of a spectrum between clandestine and overt resistance.

The auxiliary represents a clandestine support structure for both the underground and guerrillas.

The underground is a cellular organization within the resistance that has the ability to conduct operations in areas that are inaccessible to guerrillas, such as urban areas under the control of the local security forces. Examples of underground functions include: intelligence, counterintelligence (CI) networks, special material fabrication (example: false identification), munitions, subversive radio, media networks (newspaper or leaflet print shops), social media, webpages, logistic networks, sabotage, clandestine medical facilities, and generation of funding.

The auxiliary refers to that portion of the population that provides active clandestine support to the guerrilla force or the underground. Members of the auxiliary are part-time volunteers who have value because of their normal position in the community. Some functions include: logistics procurement and distribution, labor for special materials, early warning for underground facilities and guerrilla bases, intelligence collection recruitment, communications couriers or messengers, distribution media and safe house management. 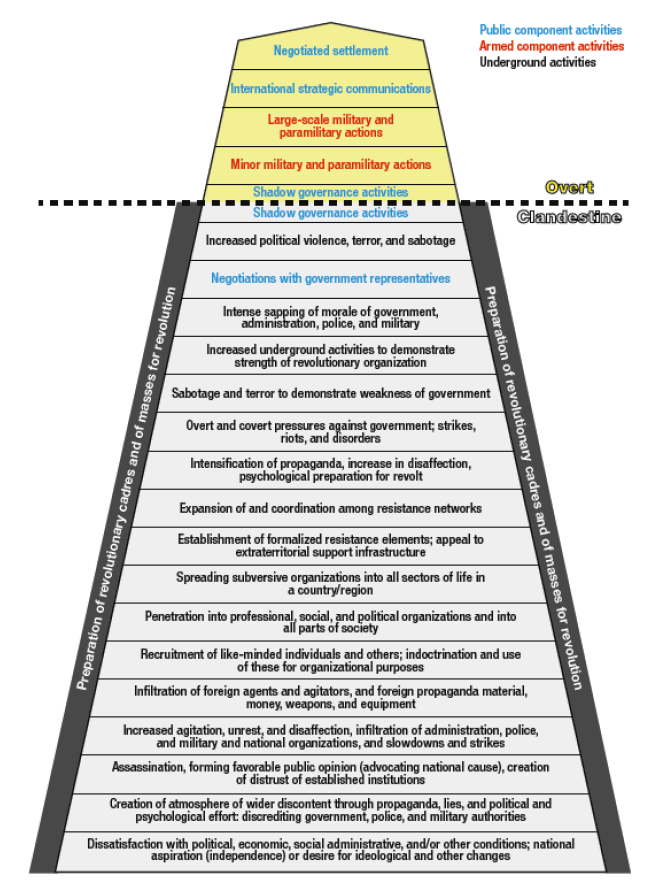