The following manual was originally published by the Kalashnikov fan site The Kalash Connection. 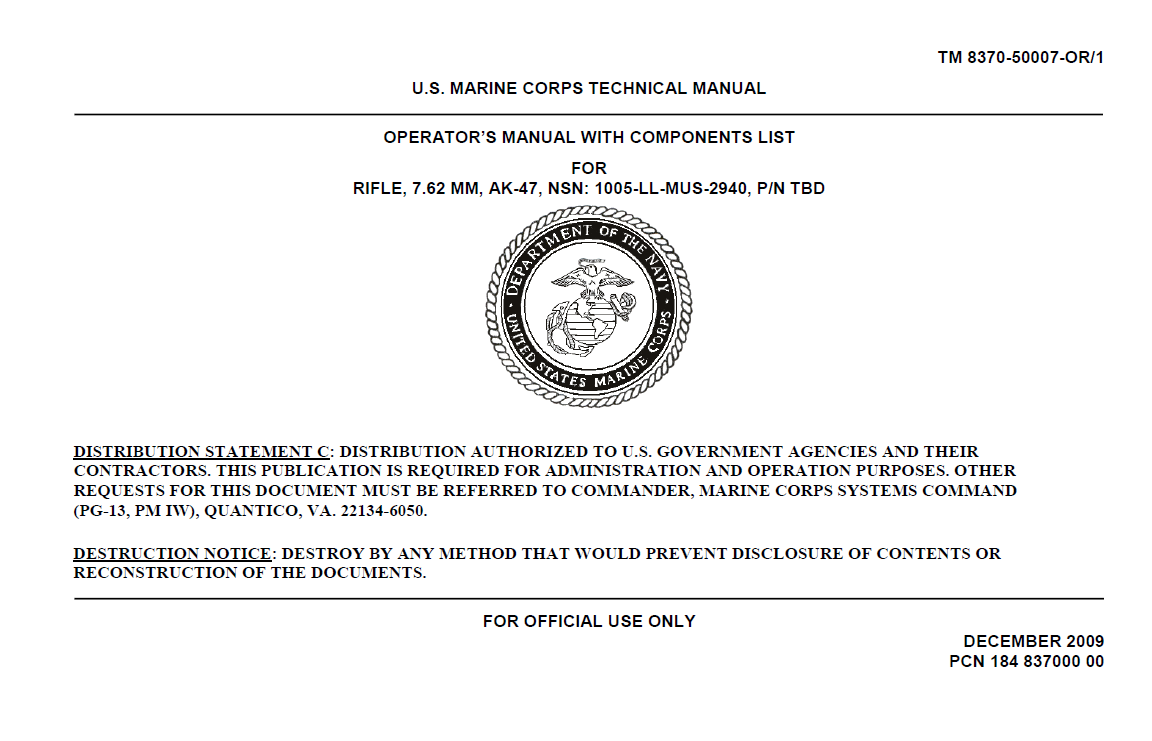 1. Type of Manual. This manual contains operating and maintenance instructions for the 7.62 x 39 mm, AK-47 rifle and its variants.

2. Equipment Name and Model Number. The AK-47 has a fixed stock. The stock and handguards may be made of wood, plastic, or metal. The lower handguard may include a foregrip. The AKS-47 has a folding metal stock.

The Marine Corps forms and record procedures used for equipment maintenance will be those prescribed in the current edition of TM 4700-15/1_, Ground Equipment Record Procedures.

Corrosion prevention and control (CPC) of weapons material is a continuing concern. While corrosion is typically associated with rusting metal, it can also include the deterioration of other items such as contacts, injection molded plastics, wood, and foam inserts in the case. Unusual cracking, softening, swelling, or breaking of these or other materials may be signs of corrosion.

DESTRUCTION OF MATERIAL TO PREVENT ENEMY USE

To render the equipment useless to the enemy, U.S. Marine Corps personnel shall destroy the equipment by weapons fire, smashing, disassembly, burning, or other means.

1. The AK-47 rifle is a lightweight, air-cooled, gas-operated, magazine-fed, shoulder-fired weapon that can be selectively fired in the fully or semi-automatic modes.

2. Other features include:
a. Cleaning Rod. Is stored under the barrel.
b. Receiver Assembly. Has an adjustable front sight post, front sight windage drum, and rear leaf sight.
c. Magazine Release. Is located between the magazine well and trigger on the bottom of the receiver.
d. Selector Lever. Selects the firing mode and prevents the weapon from being charged when in the SAFE position.
e. Top Cover. Removes from the receiver for easy cleaning and inspection.
f. Fixed Buttstock. Has a spring-loaded trapdoor which stores the combination tool kit.

LOCATION AND DESCRIPTION OF MAJOR COMPONENTS

3. Magazine. The magazine has a 30-round capacity and can be metal or plastic. It is inserted into the magazine well and is held in place by the magazine release.

5. Cleaning Rod. Is stored under the barrel.

6. Sling. The sling is adjustable and provides a means of carrying the weapon. 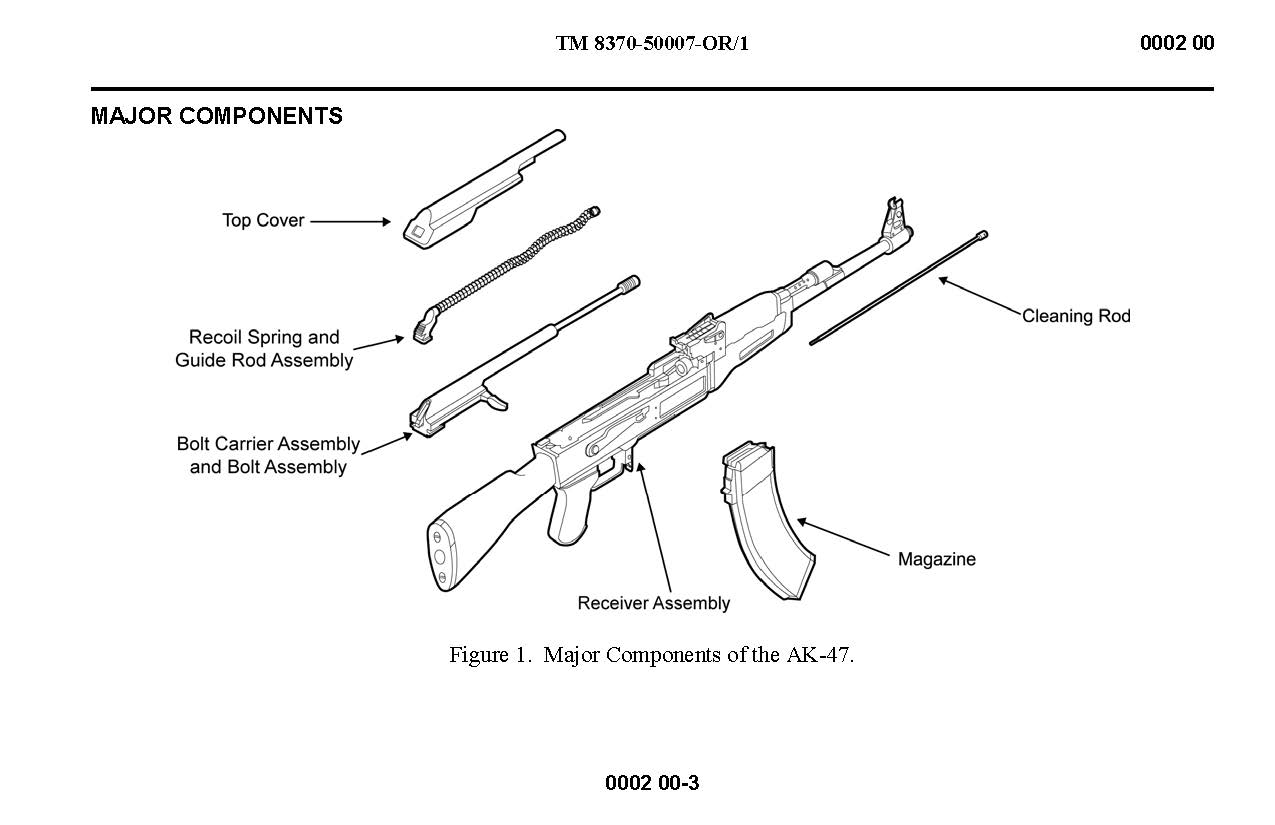 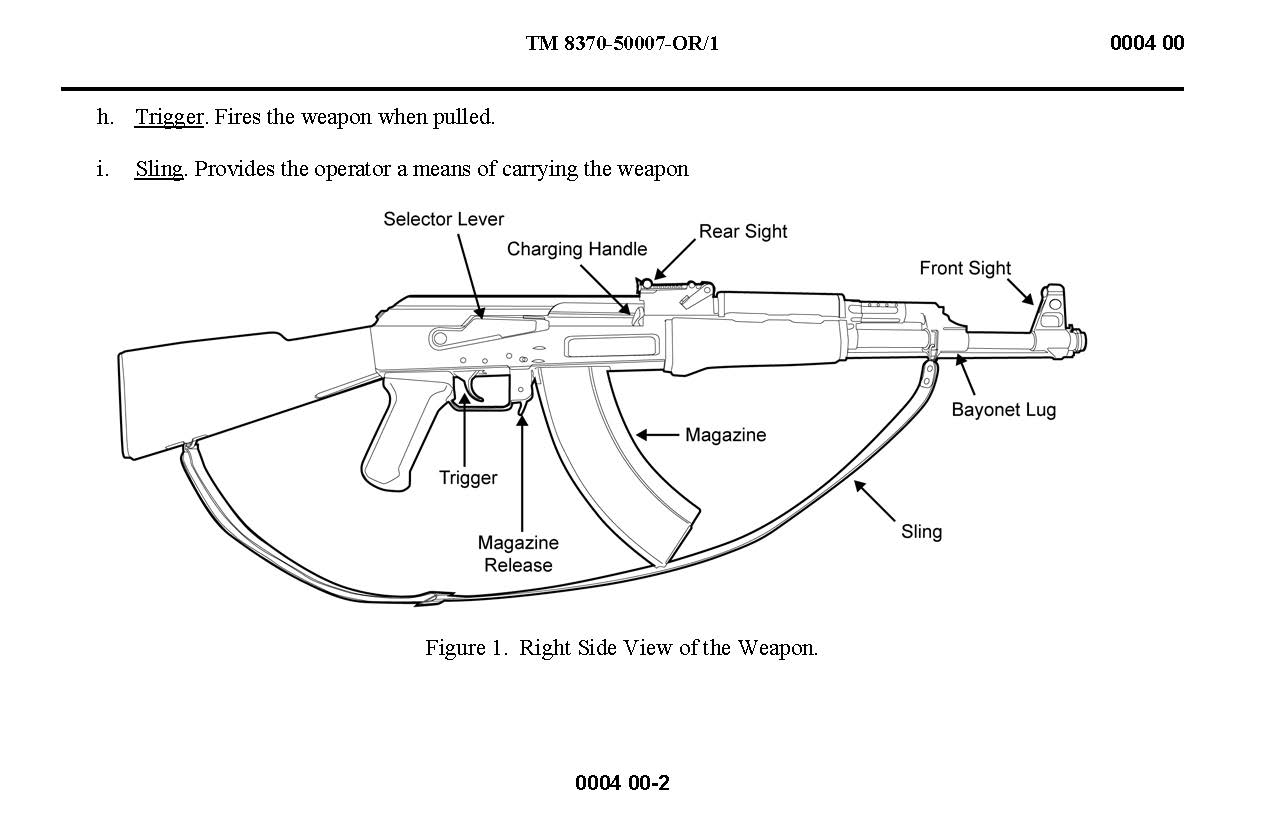 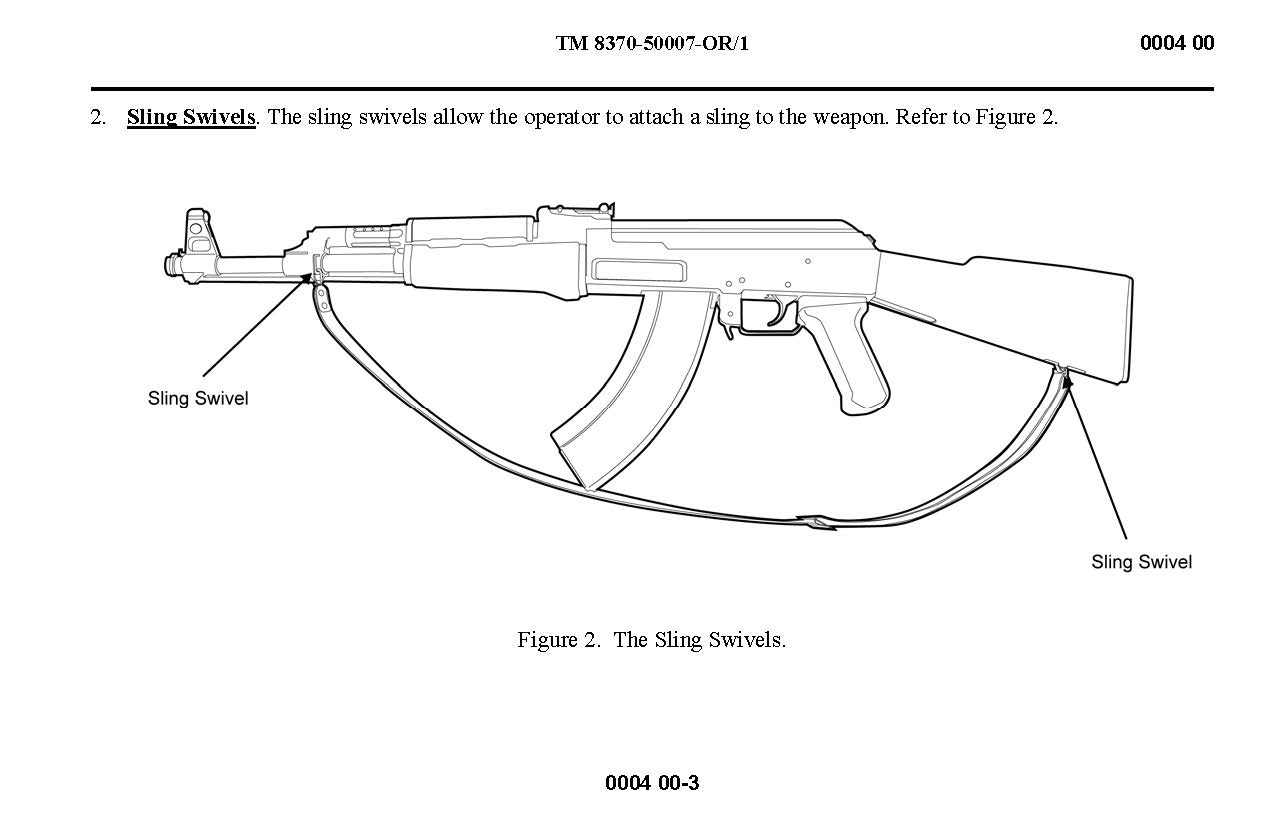 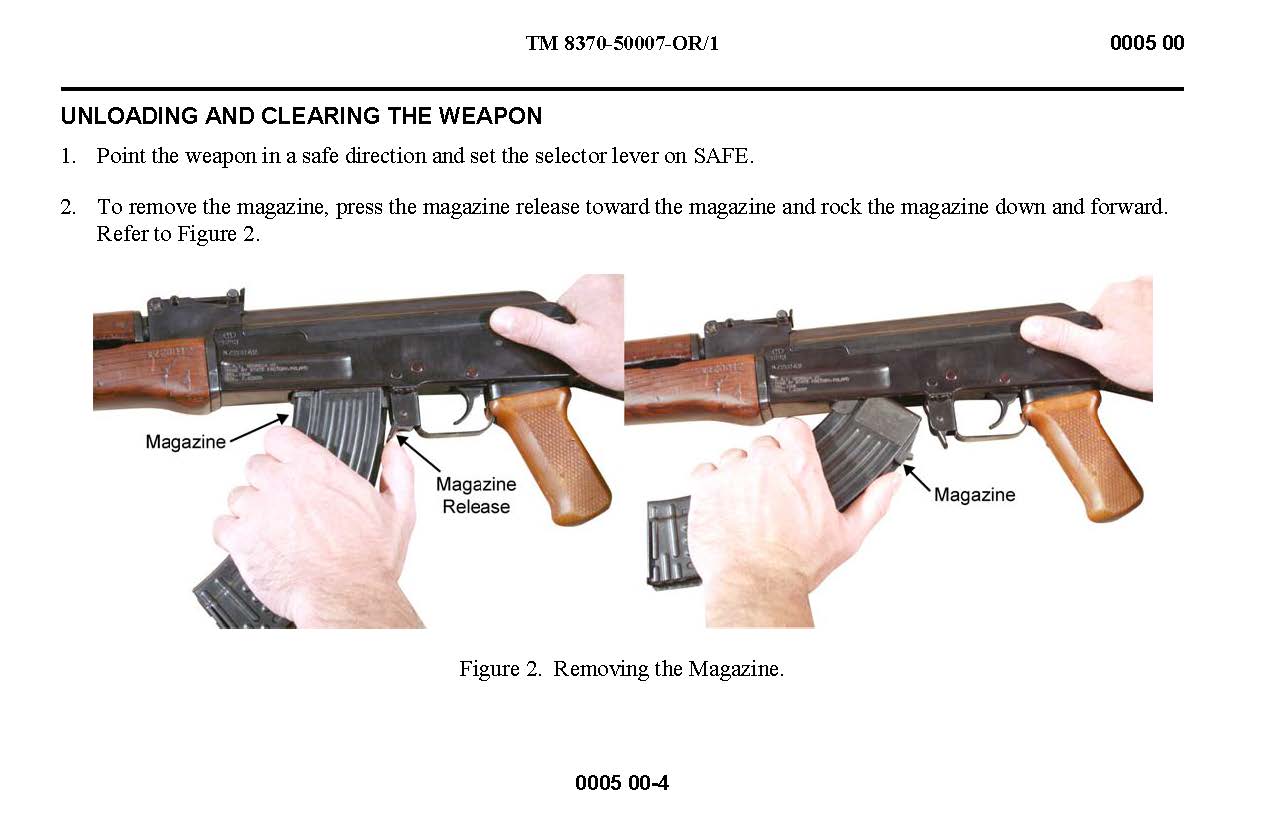 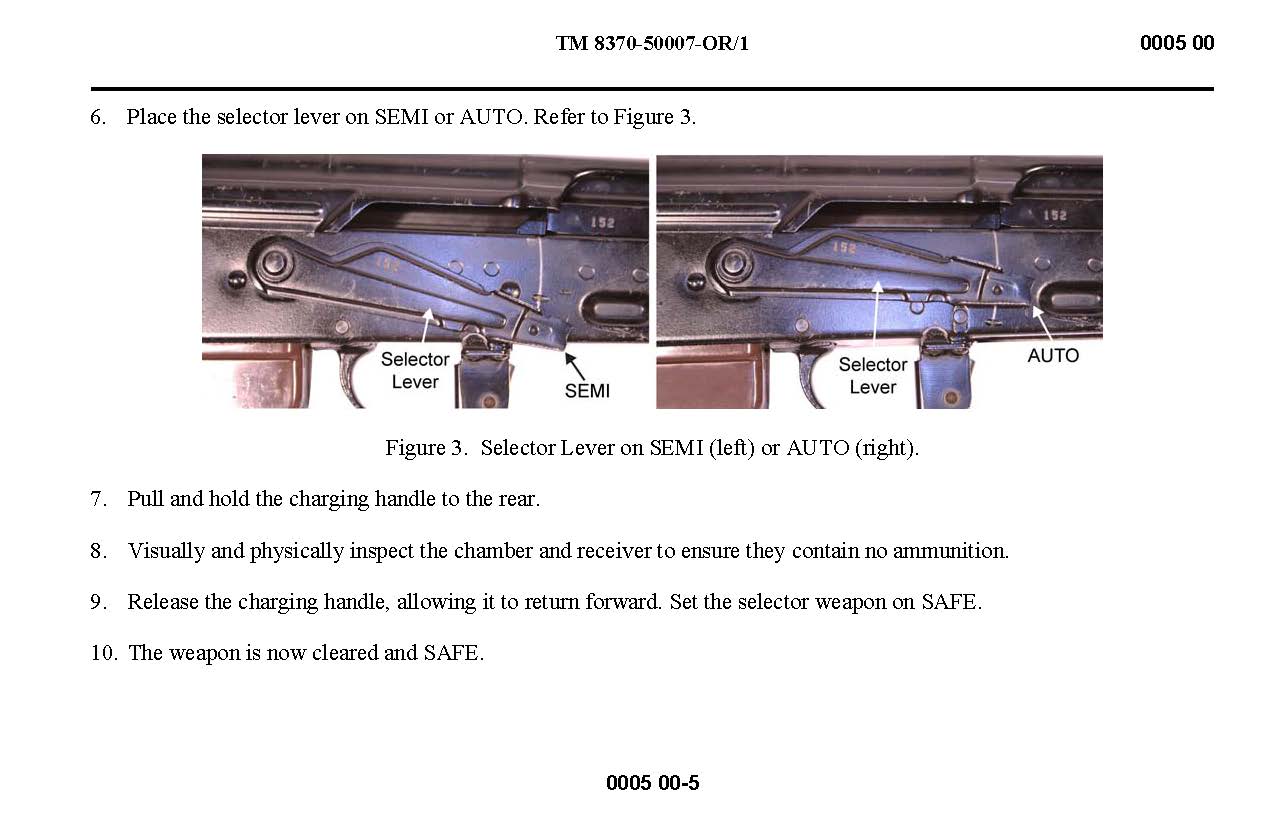