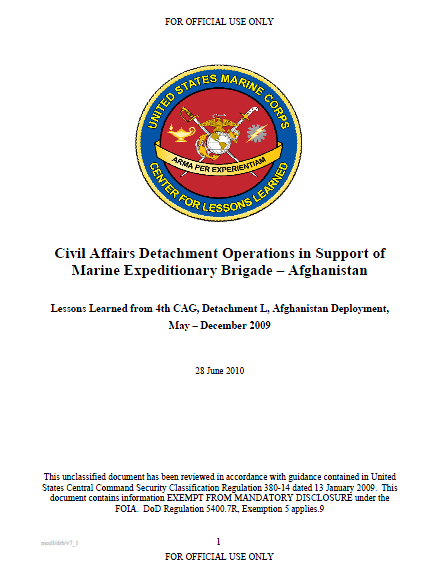 (U//FOUO) MEB-A civil affairs (CA) was organized as a primary MEB staff section under the MEB-A Assistant Chief of Staff for Civil-Military Operations (G-9), vice a stand-alone CAG with a commanding officer. Its subordinate elements, including 4th CAG, Det L, conducted field operations. Det L Marines were assigned in general support (GS) of MEB-A and direct support (DS) of Regimental Combat Team (RCT) 3 and subsequently RCT 7 following the RCT relief in place (RIP) in November 2009. The Det L headquarters element GS team supported units that did not fall under the RCT but who were still responsible for battlespace, such as the MEB-A Brigade Headquarters Group (BHG), 3d Battalion 11th Marines (3/11) (an artillery unit), and 2d Light Armored Reconnaissance (LAR) Battalion.

(U//FOUO) As part of the pre-deployment training (PTP), 4th CAG, Det L participated in a portion of Enhanced Mojave Viper (EMV) with their supported battalions. This was important in terms of preparing for counter-insurgency (COIN) operations in Afghanistan and establishing and maturing working relationships. Such training and relationship development should continue to be replicated. However, due to the compressed timeline between activation of the reserves and deployment, Det L was divided into two groups, with each group alternating between participating in two weeks of EMV and completing other mandatory pre-deployment training. Future CAG deployment cycles should be structured to enable all CA Marines to participate in the entirety of EMV with their supported battalions.

(U//FOUO) MEB-A and 4th CAG attempted to determine sources of local instability and develop effective response plans employing the tactical conflict assessment and planning framework (TCAPF) methodology developed by the U.S. Agency for International Development (USAID) and which was adopted by the U.S. Army and the MEB. TCAPF focuses on assessing local measures of stability and sources of instability by directly surveying the population. The MEB derived metrics from TCAPF in an attempt to target identified sources of instability and assess the conditions for transition of responsibilities to the Government of the Islamic Republic of Afghanistan (GIRoA).

(U//FOUO) Fourth CAG deployed 37 Marines and sailors for Det L, many of them E-4 and below with varying degrees of CA training and experience, to cover the MEB-A AO, which included three provinces and seven districts consisting of 58,000 square miles of territory. This required restructuring the CA Det into teams as small as one or two Marines serving at remote outposts. The small size of the teams, often composed of junior personnel, combined with mobility challenges experienced by all MEB-A units was a significant limiting factor in the overall impact of the MEB CA mission.

(U//FOUO) Det L had limited RIP or face-to-face turn-over upon their May 2009 arrival in-country. Approximately half of the Det L CA teams only had a few hours to conduct turn-over with the units replacing them during their RIP in December 2009. As a result, these teams were unable to directly introduce individual replacements to Afghan key leaders or provide a definitive transition of the relationships they had established during the course of their seven month deployment. These personal relationships are critical to successful COIN operations and time must be allocated to ensure they are managed effectively during RIP or other personnel transitions.

Money as a Weapons System

(U//FOUO) Det L’s ability to engage with local Afghan populations, assess and prioritize needs, and respond with funds necessary to complete projects requested by local leaders facilitated MEB-A’s ability to leverage “money as a weapons system”. This was a principle means by which CA contributed to stability and COIN operations.

(U//FOUO) The Commanders Emergency Response Program (CERP) funds were the primary mechanism employed by Det L in using money as a weapons system. CERP funds were most readily available and afforded CA flexibility and responsiveness. CA Marines also used Post-Operations Emergency Relief Fund (POERF), an International Security Assistance Force (ISAF) NATO fund available for named operations. With the MEB higher headquarters (Regional Command-South) able to authorize single expenditures of up to 17,500 Euros (approximately U.S. $23,301) and as much as 70,000 Euros (approximately U.S. $93,204) available at a given time, the benefits of POERF included the ability to fill gaps when CERP was not available or could not be used due to statutory restrictions. For example, governed by ISAF SOP 930 and described as having fewer bureaucratic hurdles to overcome than CERP, POERF was used to rapidly fund programs such as providing emergency financial assistance to internally displaced people who were forced to relocate due to MEB military operations.

(U//FOUO) USFOR-A Publication 1-06, “Money As A Weapons System – Afghanistan (MAAWS-A)” was produced as a framework for U.S. funding program oversight and placed restrictions on the usage and amounts of funds available to commanders at any given time or regarding a specific expenditure. In accordance with MAAWS-A, the CERP program has the following primary components: Reconstruction, Humanitarian Relief, Battle Damage, and Condolence Payments. The overall program coordinator is USFOR-A J8; however, the USFOR-A Engineers, J9, and J3/5 nonlethal cell serve as project managers for their particular areas and functions. As applied to MEB-A, MAAWS-A, in conjunction with MEB and RCT CERP SOPs, dictated that:

(U//FOUO) In accordance with MAAWS-A, only ranks of E-7 and above could serve as the paying agent (PA) and E-6 and above as project purchasing officer (PPO). However, because of Det L’s preponderance of more junior Marines, the MEB-A comptroller was able to initially obtain a waiver for E-5s and later an additional waiver for E-4s to serve as PAs. As LtCol DeFrancisci noted, “Civil Affairs is largely an E-5 and above job. We had a lot of E-4s and below.”