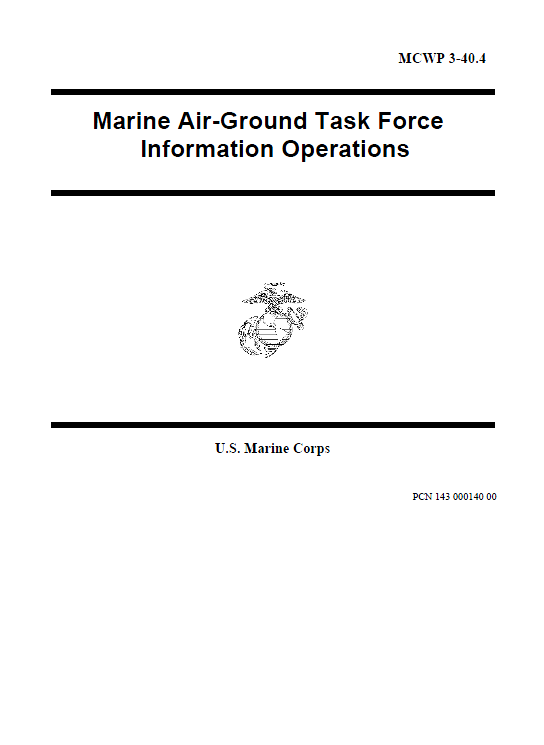 IO language and organizations continue to evolve and to be debated. This publication gives Marines a warfighter’s orientation to IO, providing a basis to understand the relevance of IO and a framework to implement IO.

This publication is intended for MAGTF planners responsible for both operational and IO planning.

The global strategic environment remains complex and potentially dangerous. Marines still face a range of traditional and non-traditional threats. Ethnic, economic, social, and environmental strains will continue to cause instability and raise the potential for violence. Many countries will retain the capability to threaten United States (US) interests abroad, and may seek to initiate a major conflict that would require a large-scale US response. In addition, there will be many other “lesser threats” that will seek to engage us across the range of operations that fall short of war. These adversaries will generally possess a regional or national level of influence, and will likely have access to lethal technologies generally available on the global market.

Some examples include terrorists, drug cartels, computer hackers, and rogue nations—who might act independently in their own self-interest. Using new technologies and readily available information, these threats will have the capability to threaten the US across geographic borders through networks and through the proliferation of weapons of mass destruction. They may avoid direct military confrontation and attack selected vulnerabilities to achieve a high payoff for little cost or they may attack to simply gain media exposure.

The US maintains a wide range of humanitarian and global security responsibilities, and these responsibilities will continue well into the future. Marines can expect to be tasked for the following:

As a crisis develops, Marines may find themselves executing multiple missions simultaneously or in rapid sequence. They may be asked to provide relief to civilians while keeping belligerents separated, defending US interests, and enforcing international law. To project power and influence, Marine Corps forces employ for presence, engagement, and response. Each will have a strong informational component. The on-scene presence of the forward-deployed Marine Air-Ground Task Force (MAGTF)—and its proximity and access to potential crisis areas—will establish it as a vital operational and informational cornerstone for follow-on forces acting as part of a national and theater crisis response.

The US seeks to shape the international environment through a variety of means, including diplomacy, economic cooperation, international assistance, security assistance, and arms control. These efforts use power, information, and influence to achieve national objectives. In peacetime, deployed Marine Expeditionary Units (MEUs) demonstrate national resolve through forward presence, and Marines enhance regional stability through cooperative engagement, with allies in exercise, exchange, and informational programs. During crises, MAGTF-shaping operations must be linked to US strategic objectives and be consistent with on-going regional engagement activities. During conflict, MAGTF-shaping operations focus on setting those conditions necessary for operational and tactical success.

Whether demonstrating national commitment through forward presence, exercising with allies and strategic partners, engaging in armed combat or providing relief to victims of a natural catastrophe, Marines will continue to support the nation’s objectives and policies. IO, used in support of battlespace shaping, ensures the purpose of the MAGTF’s mission is clear to both the local and the worldwide audience.