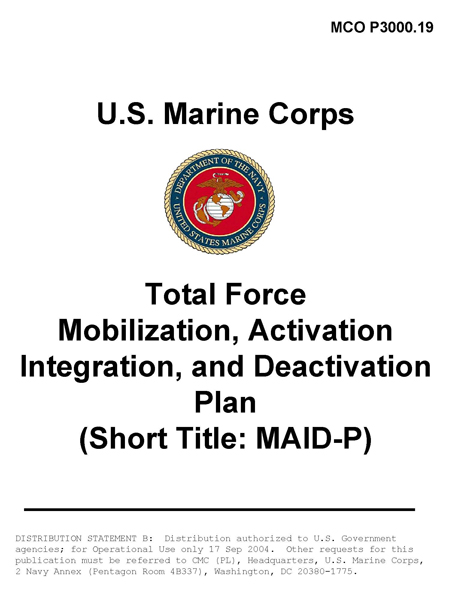 (1) This manual establishes Service policy and tasks that support references (a) through (e), and outlines procedures to conduct Marine Corps Reserve Component (RC) call-up as described in references (f) through (j). This manual is designed to support contingency planning leading to rapid augmentation and/or reinforcement of the Active Component (AC) of the U.S. Marine Corps. As such, this manual is directive in nature.

(2) The Department of Defense (DoD) will establish specific policy for each contingency requiring the activation and deployment of RC units and individuals.

a. Purpose. This Annex shows national and Marine Corps actions once the decision has been made to activate the Reserve Component. The figure below illustrates National level actions described in reference (a) requiring combatant commander, Service Headquarters, Joint Staff, DoD, and Presidential coordination to gain Presidential authority to involuntarily recall RC members to active duty (other than for training). Example below shows length of time (i.e., 3 days) between attacks on the World Trade Center/Pentagon and the President ordering the Ready Reserve to active duty1. This process is event driven.

b. Information. A Presidential Executive Order (EO) is issued authorizing the SecDef to order the Ready Reserve to active duty (other than for training). The EO will also include a declaration of a national emergency (Annex U, Appendix 1). Following the Presidential EO, the SecDef invokes reference (b) Section 101 (13) subsections (a) and (b) declaring a contingency operation for the period of the declared war or national emergency declared by the President or Congress per reference (b). Pursuant to 10 U. S. C. Section 101(a)(13), additional entitlements are authorized per Titles 10 and 38 for service members participating in the contingency operation. RC members who volunteer and receive orders to active duty in support of a contingency operation are also authorized to prescribed entitlements as they apply to their individual situations. Orders shall specifically state that an individual is on active duty, for a specified period of time, in support of the named contingency operation. D/C, M&RA, as authorized, may extend the recalled member to the full extent of the legal recall authority during Stop Loss.

2. Mission. On order, the CMC orders to active duty Marine Corps Reserve trained and qualified units and individuals in time of war, national emergency, and at such other times as national security may require. 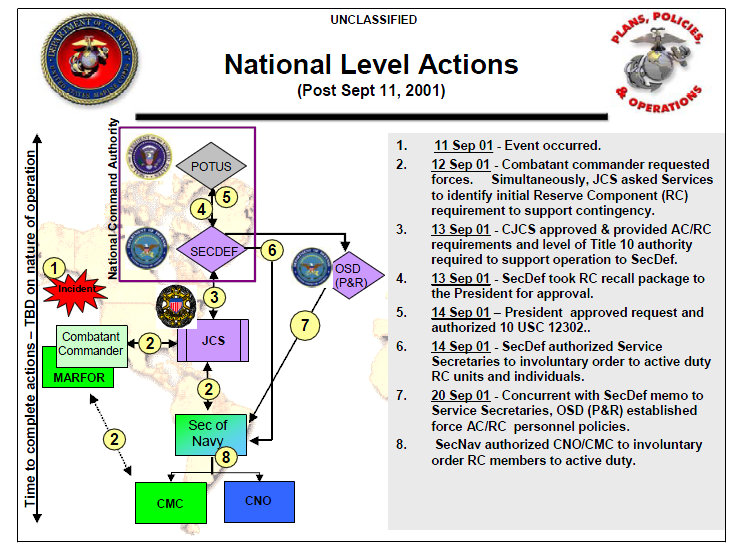 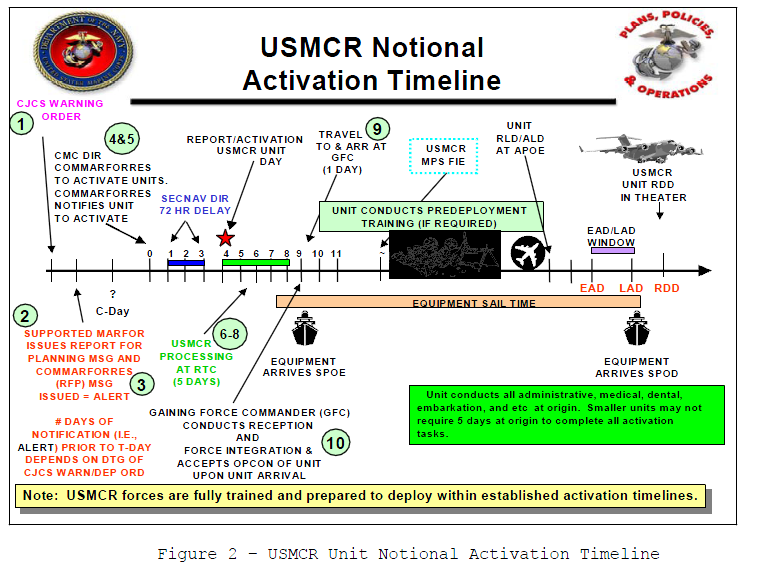