The following publication was obtained from the website of the U.S. Naval Academy. 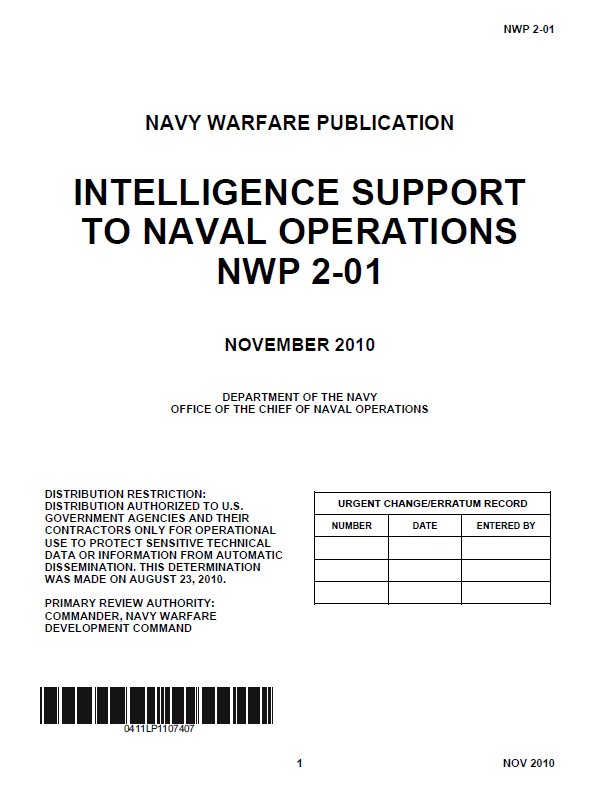 Fourteen years have elapsed since Navy Warfare Publication (NWP) 2-01, Intelligence Support to Operations Afloat (January 1997), was disseminated to the fleet. This introduction cannot begin to convey the changes that have occurred in the global security environment and the elevation of information to a “main battery” of the United States Navy’s (USN’s) arsenal.

Naval Intelligence has a proud and rich history extending well over 100 years; however, it is just a part of the entire Intelligence Community (IC), military and civilian, supporting America’s forces. Naval forces are proud to be at the forefront of joint and combined operations, and the events of the recent decade further illustrate the indispensable role of intelligence across the range of military operations (ROMO). The success of these operations depended upon the delivery of accurate and timely intelligence to the President, the Secretary of Defense (SECDEF), the combatant commanders (CCDRs), and the aircrews and ships operating around the world.

The attacks of September 11, 2001 substantially changed the strategic landscape and shaped our national security strategy. Today, combatant commands plan for a wide range of operations against a similarly wide range of threats. The Navy continually refines its core capabilities to support those plans, and correspondingly, the IC anticipates, identifies, and seeks to understand those threats in detail. The range of threats facing planners and their executors today has grown exponentially and in an asymmetrical fashion. Decision makers rely on intelligence to provide them an operational advantage by enabling the selection of optimal courses of action (COAs) in a time-sensitive maritime environment.

NWP 2-01 is a comprehensive reference detailing the intelligence support available to the naval commander in the successful planning and execution of operations.

NWP 2-01 is by nature a refresher and ready resource for the Information Dominance Corps (IDC) intelligence professionals, information warfare officers, and cryptologic technicians; however, the target audience is the operational commander. The publication’s length and content are specifically tailored to ensure a practical and valuable reference for the operational decision maker. NWP 2-01 is the foundation for a series of proposed follow-on Navy tactics, techniques, and procedures (NTTP) publications.

The United States has entered into a new era that opens alternative paths to grand strategy and combined arms warfighting. Globalization and exponential growth in computing and communications capabilities have transformed the information environment from an enabling medium to a nexus of commercial, social, political, and intellectual activity. Evolution of space and cyberspace from niche warfare support applications to key domains for competition and combat reflects the increasing prominence and militarization of the information environment. While the nature of warfare endures, warfare modes are evolving to fit the unique characteristics of information age power, competition, and conflict. The globalization and explosion of information technology (IT) capabilities are making data an inexpensive commodity and leveling the playing field for command and control (C2), information access, and knowledge management.

ID is defined as superiority in the generation, manipulation, and employment of information sufficient to afford its possessors military dominance. ID reduces uncertainty, informs risk assessment, and uncovers hidden competitive options and opportunities. It aims to apply information power better than any adversary to amplify traditional naval combat capabilities and expand options for our operational commanders. The need for a new strategy and roadmap focused on attaining ID was realized as the Navy decidedly placed information on par with platforms, treating information as a weapon across the full ROMO. As a result, information no longer represents a mere enabler of operations: it is elevated in status as a primary competitive advantage and core capability of the Navy.

The Navy must transform its strategic concepts, organizations, processes, and culture to remain a dominant force in this information age. To achieve success in 21st century warfare, the Navy created a fully integrated intelligence, information, cyberspace, C2, and network operations capability and wields it as a weapon. The Chief of Naval Operations (CNO) directed the melding of intelligence, information and network management, to navigate the course ahead. A clear course has been set to align Navy organizations to effectively operationalize cyberspace and information operations (IO) by establishing Fleet Cyber Command/Tenth Fleet (FLTCYBERCOM/COMTENTHFLT) and realigning the Office of the Chief of Naval Operations (OPNAV) staff to achieve integration and to foster innovation. The establishment of the Deputy CNO for Information Dominance (N2/N6) represents a landmark transition in the evolution of naval warfare.

The IDC was created to more effectively and collaboratively lead and manage a cadre of officers, enlisted, and civilians who possess extensive skills in information intensive fields. The naval intelligence professional is a key pillar of the IDC. The following Navy personnel comprise the IDC:

The common goal of the IDC is assuring the commander and the warfighter get the right information at the right time in order to optimize perceptions and understandings which support and make more effective the processes of decisionmaking and C2. 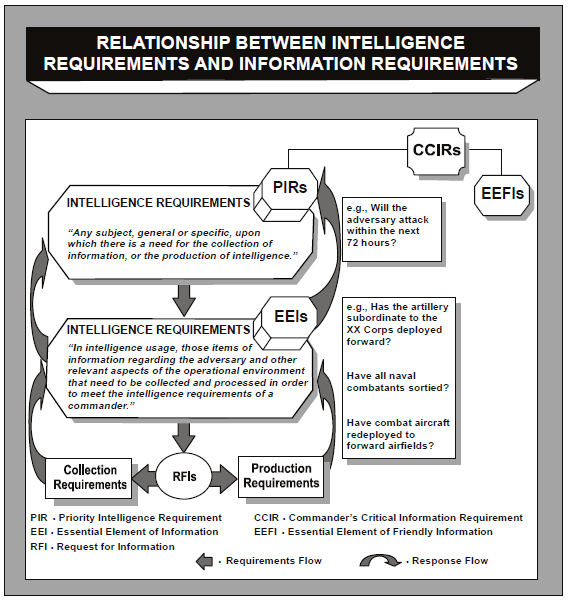