The following U.S. Northern Command concept plan for defense support of civil authorities was released last July under the Freedom of Information Act. 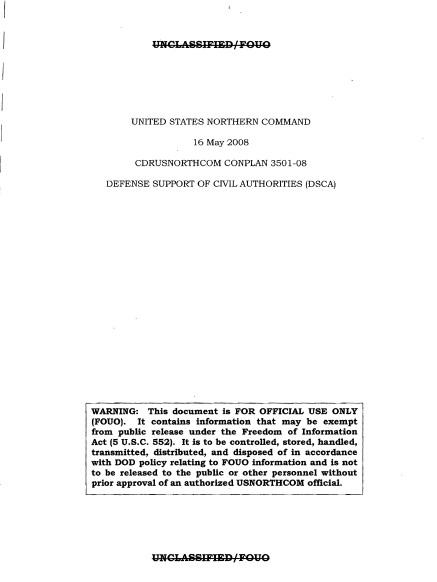 1. Purpose. Natural or man-made disasters and special events can be so demanding that local, tribal) state and non-military federal responders are temporarily overwhelmed by the situation. The Department of Defense (DOD) has a long history of supporting civil authorities in the wake of catastrophic events. When directed by the President or the Secretary of Defense (SecDef), United States Northern Command (USNORTHCOM) will respond quickly and effectively to the requests of civil authorities to save lives, prevent human suffering, and mitigate great property damage. The Joint Strategic Capabilities Plan 2008 (JSCP) directs CDRUSNORTHCOM to prepare a plan to support the employment of Title 10 DOD forces providing Defense Support of Civil Authorities (DSCA) in accordance with (IAW) the National Response Framework (NRF), applicable federal law, DOD Directives (DODD), and other policy guidance including those hazards defined by the National Planning Scenarios that are not addressed by other JSCP tasked plans. DSCA is a subset of DOD civil support that is performed within the parameters of the NRF.

(1) USNORTHCOM was established in response to the September 11, 2001 terrorist attacks against the United States. USNORTHCOM’s dual mission is to conduct Homeland Defense (HD) and civil support operations. When directed by the President or the SecDef, USNORTHCOM conducts DSCA operations IAW the NRF by responding to Requests for Assistance (RFA) from civil authorities.

(2) The NRF is a guide to how the nation conducts all-hazards response. This plan aligns with the NRF coordinating framework and applies to all forms of support that DOD could provide to civil authorities under the NRF. In addition to Large-scale disaster responses) DOD has long provided smaller scale support for wildland firefighting, National Special Security Events (NSSE)t such as political conventions, and special events (SE) such as major sporting events.

b. Statement. This summary provides military decision makers with a brief recapitulation of the major aspects of this plan. It is based on planning factors and estimates available at the time of preparation and is subject to modification in the context of a specific contingency.

c. Legal Considerations. The NRF provides the coordinating framework for support provided under the Robert T. Stafford Disaster Relief and Emergency Assistance Act (PL 93-288) (Title 42 United States Code Section 5121, et. seq.). The Stafford Act and the Economy Act (Title 31 United States Code Section 1535) are the primary sources of statutory authority which govern the federal response. Support under these acts range from small-scale efforts to large-scale operations involving thousands of DOD personnel. DODD 3025.dd) Defense Support of Civil Authorities, is currently in draft, but when finalized, will supersede the current DODDs describing DOD support of civil authorities. Civil support under this plan does not include direct support to law enforcement. The Posse Comitatus Act (PCA) (Title 18 United States Code Section 1385) and DOD policy place limitations on direct involvement in law enforcement activities by Title 10 military personnel. Direct support to civilian law enforcement authorities requires specific statutory or Constitutional authority to not violate the PCA. While providing DSCA, DOD forces will conform to the CJCS Standing Rules for the Use of Force (SRUF) and any supplemental guidance provided by USNORTHCOM.

a. State, local, tribal, private-sector, and specific Federal authorities have primary responsibility for public safety and security, and typically are the first line of response and support. Local jurisdictions have primary authority and responsibility for law enforcement activities. As local incidents or events escalate, additional resources will first be obtained through the activation of mutual aid agreements with neighboring localities and/ or State authorities. In the context of State’s resources, the National Guard (NG), while serving under state control for state purposes, is not considered to be part of the Department of Defense (DOD) and executes missions under the command and control (C2) of the Governor in accordance with (IAW) the State’s constitution and statutes.

c. It is the intent of this appendix to provide an overview of defense support of law enforcement as it cannot cover all potential requests for Defense Support of Civil Authorities (DSCA) that relate to civilian law enforcement. Defense support of civilian law enforcement agencies covers a broad spectrum of potential activities from very small support activities such as training civilian law enforcement, loaning a piece of equipment, or an Explosive Ordnance Disposal (EOD) or dog team to large-scale incidents or events such as a riot. The Department of Homeland Security (DHS) addresses civil disturbance operations as part of public safety. This appendix will not address civil disturbance operations. See USNORTHCOM CONPLAN 3502, Civil Disturbance Operations, for more information.

d. State level emergency response operations for natural disasters have evolved concerning the use of the NG in a law enforcement role from state to state. Govemor1s use of their powers has set a precedence for the future. Governors may, by use of their state powers and via a state to state memorandum of agreement, authorize the NG of one state to perform law enforcement and security duties within the another state.

e. In accordance with (IAW) reference g. which is still in DRAFT form, DSCA does not apply to the following programs that are related to support to law enforcement agencies:

(2) Inspector General of the DOD, the Defense Criminal Investigative Service:? or the military criminal investigative organizations when they are conducting joint investigations with civilian law enforcement agencies of matters within their respective jurisdictions, using their own forces and equipment.

(3) The non-Federalized National Guard and their activities under the C2 of the Governor.

(2) The Posse Comitatus Act will not be modified.

(3) DOD policy and guidance will not change after the formal release of references g and i.

a. Concept of Operations

(1) Defense support of civilian law enforcement agencies in response to a natural or man-made disaster, emergency, incident, or event will be processed IAW reference i above and executed at the direction of the President or approval of the Secretary of Defense (SecDef) IAW the Base plan.

(3) Use of Information Collected During DSCA Operations. Military Departments and Defense Agencies are encouraged to provide to federal, state, or local civilian law enforcement officials any information collected during the normal course of DSCA operations that may be relevant to a violation of any federal or state law within the jurisdiction of such officials.

(4) USNORTHCOM will initiate coordination for defense support with the designated law enforcement agency upon SecDef approval of a RFA.

(5) Training Civilian Law Enforcement. Military Departments and Defense Agencies may provide training to federal, state, and local civilian law enforcement officials. Such assistance may include training in the operations and maintenance of equipment made available under the military equipment loan/lease program. This does not permit large scale or elaborate training, and does not permit regular or direct involvement of military personnel in activities that are fundamentally civilian law enforcement operations, except as otherwise approved and authorized.

(1) Coordination regarding legality of support will be staffed through the chain of command and USNORTHCOM Judge Advocate (JA) to the SecDef.

(2) The SecDef is the approval authority for all RFAs made by law enforcement agencies. This includes:

(a) Requests for potentially lethal support (i.e.) lethal to the public, a member of law enforcement, a military member or DOD employee).

(b) Loans of equipment, facilities, or personnel to law enforcement.

(3) Immediate response authority. When requested, local military commanders and DOD officials may provide defense support to civil law enforcement agencies under this authority in order to save lives, prevent human suffering, and mitigate great property damage. This authority does not authorize DOD forces to perform law enforcement functions in support of civil law enforcement agencies unless consistent with an exception to the Posse Comitatus Act (18 USC) Section 1385) and IAW the guidance provided in the Basic plan.

(4) Restrictions on direct assistance to civilian law enforcement. Except as otherwise provided, the prohibition on the use of military personnel “as a Posse Comitatus or otherwise to execute the laws” prohibits the following forms of direct assistance:

(a) Interdiction of a vehicle, vessel, aircraft, or other similar activity.

(b) A search or seizure.

(c) An arrest, apprehension, stop and frisk, or similar activity.

(d) Use of military personnel for surveillance or pursuit of individuals, or as undercover agents, informants, investigators, or interrogators.

(5) The SecDef is the approval authority for all assistance with the potential for confrontation between DOD personnel and civilian individuals or groups.

(6) If a DOD Component has a question on the appropriateness or legality of providing requested support, such request shall be forwarded through the military chain of corrunand to the Assistant Secretary of Defense for Homeland Defense and Americas’ Security Affairs (ASD(HD/ ASA)).

4. Administration and Logistics. See Base plan

5. Command and Control. See Base plan