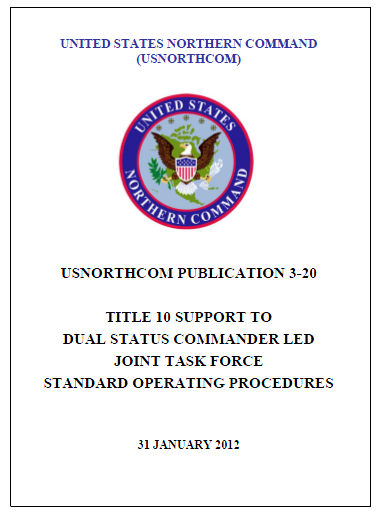 The Council of Governors and the President of the United States have identified the need for Dual Status Commanders (DSC) to unify the response efforts within the 54 Territories and States of the United States of America. United States Northern Command (USNORTHCOM) has identified Title 10 Deputy Commanders (O-6 in grade) to lead a Joint Support Force Staff Element (JSF-SE) that will integrate with the State-Level DSC staff in order to provide unity of effort to the response of both Title 32/State Active Duty (SAD) and Title 10 forces. This Standard Operating Procedures document outlines the USNORTHCOM Staff support to the DSC Program, a template for a T10 Deputy Commander Handbook and the methods, procedures and best practices for the JSF-SE.

This chapter provides an overview and background of the Dual Status Commander (DSC) program, and it provides an introduction to the Title 10 Support to Dual-Status Commander Led Joint Task Force Standard Operating Procedures which details the roles, responsibilities and processes/procedures for USNORTHCOM Staff, components, subordinates, and assigned/attached forces in supporting the DSC program.

1.1.3. This SOP assumes that USNORTHCOM will provide a baseline JSF-SE that will integrate with the State JTF staff to support the T10 requirements. The JSF-SE will leverage support from the State JTF staff to meet the T10 requirements (e.g., reporting of JTF Situation Report (SITREP)/Storyboard, joint personnel status reports (JPERSTATs), logistical status reports (LOGSTATs), etc). While DSC led JTFs can organize with parallel and separate staff structures under a DSC, the best practice referenced within this SOP is the integrated staff model, where T10 staff are fully integrated with the State Active Duty/Title 32 (SAD/T32) staff.

1.1.4. All references to State within this SOP are used to refer to States, Territories, Commonwealths and the District of Columbia.

1.2.1. In January 2009, the Secretary of Defense (SecDef) directed the development of options and protocols that allow Federal military forces supporting the Primary Agency to assist State emergency response personnel in a coordinated response to domestic disasters and emergency operations, while preserving the President’s authority as Commander in Chief.

1.2.2. In February 2010, during the first Council of Governors meeting, the SecDef acknowledged mutually exclusive sovereign responsibilities of Governors and the President, and urged all participants to focus on common ground and build a consensus approach to coordinate disaster response.

1.2.4. In December 2010, a Joint Action Plan for DSC was approved by the Council of Governors, Department of Defense (DOD), Department of Homeland Security (DHS), and Federal Emergency Management Agency (FEMA), stating that the appointment of a DSC is the “usual and customary command and control arrangement” when State and Federal military forces are employed simultaneously
in support of civil authorities in the United States.

1.2.6. This SOP is one of many documents which address the DSC integrated response to a DSCA event.

1.2.7. Figure 1-2 provides a hierarchy of DOD’s DSCA-related documents. Links to these references can be found in Annex A.

1.2.7.4. The CDRUSNORTHCOM Standing EXORD for DSCA operations outlines how USNORTHCOM will employ DOD forces in support of other federal agencies in the USNORTHCOM Operational Area (OA).

1.2.7.5. USNORTHCOM concept plan (CONPLAN) for DSCA is the Geographic Combatant Command (GCC) plan to support the employment of T10 forces providing DSCA in accordance with (IAW) the NRF, applicable federal laws, DOD Directives, and other policy guidance including those hazards defined by the National Planning Scenarios that are not addressed by other Joint Strategic Capabilities Plan tasked plans.

1.2.7.7. The DSC Concept of Operations (CONOPS) describes the terms, responsibilities, and procedures governing the qualification, certification, appointment, and employment of a DSC for designated planned events, or in response to an emergency or major disaster within the United States, or its territories, possessions, and protectorates.

1.2.7.9. The JTF Commander Training Course (JCTC) Handbook serves as a working reference and training tool for individuals who will command and employ JTFs for HD and CS at the federal and/or state level.