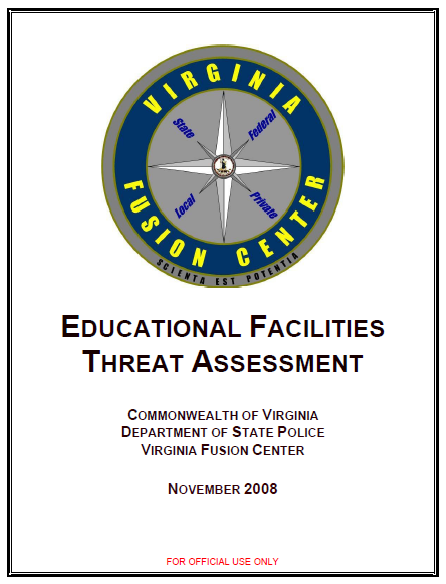 Although there are no identified terrorist threats to Virginia educational institutions and the probability of a terrorist attack on these facilities is considered moderate,1 schools could be considered a high-value target for attacks and the consequences could be dire. This threat is highlighted by recent shootings and violent incidents that have occurred nationwide as well as terrorist attacks overseas.

The Virginia Fusion Center (VFC) has compiled information homeland security agencies as well as open sources to create this Threat Assessment. While every effort was made to ensure accurate and thorough reporting of the threat, it is expected that not every schools-related incident has been reported to the VFC. Information contained in this Threat Assessment is current as of October 2008.

Schools and educational facilities were targeted in 285 terrorist attacks in 2008, representing 3% of the targets attacked. While this may appear to be a low percentage, it is similar to the number of attacks against businesses (3%) and government facilities (4%) during the same period. Compared to the National Counterterrorism Center’s (NCTC) data baseline in 2005, attacks on schools rose by 22% but of those attacks reported, there was a 67% increase in the number of school facilities hit in those attacks. These figures may indicate that terrorists are increasingly more interested in garnering media attention through inflicting mass casualties than by attacking critical infrastructure, possibly leading to a greater likelihood of an attack against schools because they are virtually unprotected.

According to a Joint Homeland Security Assessment, there is no credible or specific information regarding pre-operational or imminent plans of attack by terrorist or extremist organizations against U.S. educational facilities. An analysis of the threats to these facilities, a majority of which involved hoaxes and unsubstantiated bomb threats, revealed the incidents were tied to criminal motivation. Although these incidents were criminal in nature with no apparent links to terrorism, there have been several high-profile international terrorist attacks directed toward educational institutions.

The notable death toll and damage criminal elements have inflicted on educational facilities in the U.S. coupled with the publicity these attacks have generated may heighten the appeal of U.S. educational facilities as terrorist targets. The attractiveness of schools as targets is increased by the ease of access to targets, vulnerable building designs, and the potential for causing mass injuries and fatalities to civilians. Terrorists or criminals might also target higher education facilities as they may house sensitive information and potentially hazardous materials.

Virginia’s 2,065 local and regional schools and education centers, 695 private schools, and 311 institutions of higher learning and vocational institutions provide numerous targets for criminal and terrorist exploitation. While these numbers may appear small in comparison to other potential targets for attack, the number of potential attack sites coupled with the inherent vulnerabilities previously stated is cause for concern. 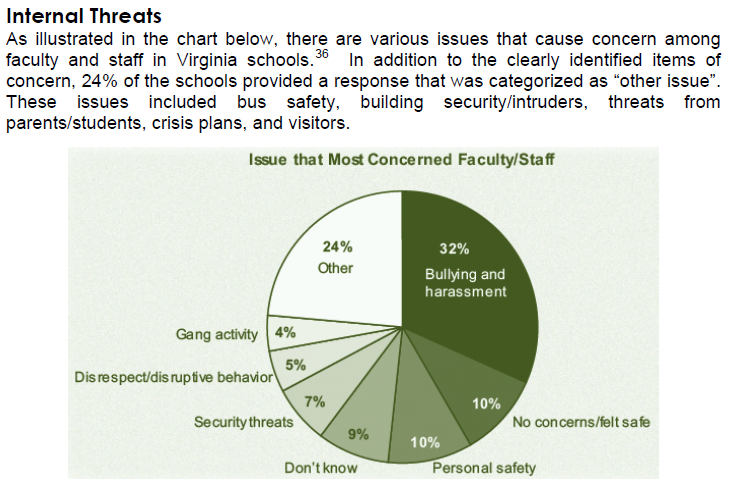 Based on open source reporting, domestic extremist groups and internationally linked terrorist groups have been involved in recruiting in schools, colleges, and universities in the U.S. and Virginia. The recruitment activity related to white supremacist groups has originated from groups in Virginia and other groups in the U.S. In November 2004, a white supremacist hate music recording company called Panzerfaust launched “Project Schoolyard USA”, which attempted to distribute100,000 copies of a CD featuring neo-Nazi hate bands to schoolchildren across the country in order to attract young people to the white supremacist ideology. A month later, a white supremacist group distributed Aryan literature to students leaving Harrisonburg High School.

Among other domestic terrorist groups, including radical animal and environmentalist groups (i.e. Earth Liberation Front, Animal Liberation Front), pinpointing specific recruitment for terrorist activities is more elusive. Information developed about these extremist groups suggests that recruitment likely takes place at gatherings of mainstream groups, which are considered legitimate environmental and animal rights groups. Furthermore, the radicalization and recruitment of individuals to carryout domestic terrorist incidents is decentralized and not specifically directed by the legitimate organizations. Regardless of the group, recruiting is an important activity to identify in regards to the potential for related criminal and terrorist threats.

The threat of radicalization via the Internet is also growing as jihadists and other domestic terrorist groups hone their propaganda skills and further refine their message. Currently, there is no intelligence indicating the radicalization or recruitment of juveniles in Virginia by international terrorist organizations to carry out attacks; however, with the ongoing recruitment efforts by radical foreign and domestic terrorist elements, this scenario cannot be discounted.

Information suggests the Muslim Student Association (MSA) may be the primary conduit through which Islamic radicals access college campuses to promote an extremist Salafist version of Islam which is commonly used as an ideological justification of terrorism. A known radical and subject on the terrorist watch list has visited Virginia universities to include George Mason and Virginia Commonwealth Universities. Internet postings indicate the subject is a regular speaker at MSA events.