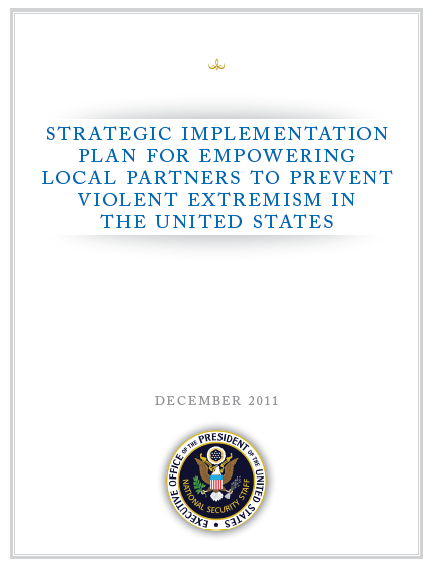 Law enforcement and government officials for decades have understood the critical importance of building relationships, based on trust, with the communities they serve. Partnerships are vital to address a range of challenges and must have as their foundation a genuine commitment on the part of law enforcement and government to address community needs and concerns, including protecting rights and public safety. In our efforts to counter violent extremism, we will rely on existing partnerships that communities have forged with Federal, State, and local government agencies. This reliance, however, must not change the nature or purpose of existing relationships. In many instances, our partnerships and related activities were not created for national security purposes but nonetheless have an indirect impact on countering violent extremism (CVE).

At the same time, this Strategic Implementation Plan (SIP) also includes activities, some of them relatively new, that are designed specifically to counter violent extremism. Where this is the case, we have made it clear. It is important that both types of activities be supported and coordinated appropriately at the  local level.

The Federal Government has held a series of consultative meetings with communities, local government and law enforcement, civil society organizations, foundations, and the private sector to better understand how it can facilitate partnerships and collaboration. This leverages a key strength identified in the National Strategy for Empowering Local Partners: “The Federal Government, with its connections to diverse networks across the country, has a unique ability to draw together the constellation of previously unconnected efforts and programs to form a more cohesive enterprise against violent extremism.” Examples of this include the following:

We also began exploring how to incorporate CVE as an element of programs that address broader public safety, violence prevention, and resilience issues. This has the advantage of leveraging preexisting initiatives and incorporates CVE in frameworks (such as safeguarding children) used by potential local partners who may otherwise not know how they fit into such efforts. For example, although many teachers, healthcare workers, and social service providers may not view themselves as potentially contributing to CVE efforts, they do recognize their responsibilities in preventing violence in general. CVE can be understood as a small component of this broader violence prevention effort. Departments and agencies will review existing public safety, violence prevention, and resilience programs to identify ones that can be expanded to include CVE as one among a number of potential lines of effort.

Planned activities to expand support to local partners include the following: