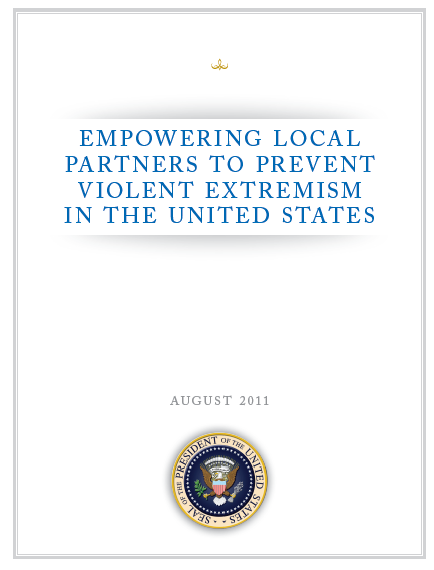 The seal of the United States of America is inscribed with the Latin dictum E Pluribus Unum—out of many, one. It is our great strength that the American social fabric continues to weave together waves of immigrants to the United States and people from all backgrounds and walks of life as part of an indivisible community. We are a pluralistic Nation and a society that does not just accept diversity; we embrace it, and we are stronger as a result. We surmount the many challenges that we face by remaining committed to the American ideals of freedom, equality, and democracy, which transcend differences of religion, ethnicity, and place of birth. Since America’s founding, our country and our ideals have been assailed by forces of hate and division, yet we remain strong, unified, and resilient.

Throughout history, violent extremists—individuals who support or commit ideologically-motivated violence to further political goals—have promoted messages of divisiveness and justified the killing of innocents. The United States Constitution recognizes freedom of expression, even for individuals who espouse unpopular or even hateful views. But when individuals or groups choose to further their grievances or ideologies through violence, by engaging in violence themselves or by recruiting and encouraging others to do so, it becomes the collective responsibility of the U.S. Government and the American people to take a stand. In recent history, our country has faced plots by neo-Nazis and other anti-Semitic hate groups, racial supremacists, and international and domestic terrorist groups; and since the September 11 attacks, we have faced an expanded range of plots and attacks in the United States inspired or directed by al-Qa’ida and its affiliates and adherents as well as other violent extremists. Supporters of these groups and their associated ideologies come from different socioeconomic backgrounds, ethnic and religious communities, and areas of the country, making it difficult to predict where violent extremist narratives will resonate. And as history has shown, the prevalence of particular violent extremist ideologies changes over time, and new threats will undoubtedly arise in the future.

The United States has rich experience in supporting locally-based initiatives that connect communities and government to address community challenges through collaboration and the development of stakeholder networks. While recognizing that different challenges require the involvement of different stakeholders, we view community-based problem solving as an effective model of organizing communities and government to counter violent extremism in the homeland. The following provides three examples of this model in practice.

The Departments of Justice and Homeland Security established the Building Communities of Trust (BCOT) Initiative to improve trust among police, fusion centers, and the communities they serve in order to address the challenges of crime and terrorism prevention. In support of BCOT, a National Planning Team comprised of representatives from Federal, state, and local governments; community organizations; and privacy and civil liberties groups convened and, in select locations, conducted roundtables to explore how to build and maintain relationships of trust. Lessons learned from these roundtables have resulted in official guidance highlighting the importance of meaningful information sharing, responding to community concerns, and distinguishing between innocent cultural behaviors and conduct that may legitimately reflect criminal activity or terrorism precursors.

Responding to a series of lethal school shootings in the late 1990’s, which culminated with the tragedy at Columbine High School, the Departments of Education, Justice, and Health and Human Services launched the Safe Schools/Healthy Students (SS/HS) Initiative to create broader, more comprehensive local programs to prevent violence and substance abuse among our Nation’s youth, schools, and communities. In order to receive an SS/HS grant, school districts must partner with local mental health experts, juvenile justice officials, and law enforcement. Proposals must include programs that address violence and substance abuse prevention; social, emotional, and behavioral development; school and community-based mental health services; and early childhood development. According to an ongoing evaluation, the Initiative has resulted in fewer students experiencing or witnessing violence, increased school safety, and an overall decrease in violence in communities where the program is active.

Radicalization that leads to violent extremism includes the diffusion of ideologies and narratives that feed on grievances, assign blame, and legitimize the use of violence against those deemed responsible. We must actively and aggressively counter the range of ideologies violent extremists employ to radicalize and recruit individuals by challenging justifications for violence and by actively promoting the unifying and inclusive vision of our American ideals.

Toward this end, we will continue to closely monitor the important role the internet and social networking sites play in advancing violent extremist narratives. We protect our communities from a variety of online threats, such as sexual predators, by educating them about safety on the internet, and we are using a similar approach to thwart violent extremists. We will work to empower families and communities to counter online violent extremist propaganda, which is increasingly in English and targeted at American audiences.