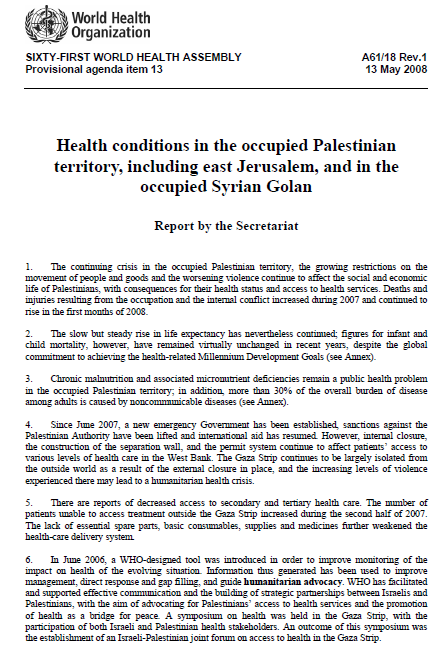 1. The continuing crisis in the occupied Palestinian territory, the growing restrictions on the
movement of people and goods and the worsening violence continue to affect the social and economic life of Palestinians, with consequences for their health status and access to health services. Deaths and injuries resulting from the occupation and the internal conflict increased during 2007 and continued to rise in the first months of 2008.

2. The slow but steady rise in life expectancy has nevertheless continued; figures for infant and child mortality, however, have remained virtually unchanged in recent years, despite the global commitment to achieving the health-related Millennium Development Goals (see Annex).

3. Chronic malnutrition and associated micronutrient deficiencies remain a public health problem in the occupied Palestinian territory; in addition, more than 30% of the overall burden of disease among adults is caused by noncommunicable diseases (see Annex).

4. Since June 2007, a new emergency Government has been established, sanctions against the
Palestinian Authority have been lifted and international aid has resumed. However, internal closure,
the construction of the separation wall, and the permit system continue to affect patients’ access to
various levels of health care in the West Bank. The Gaza Strip continues to be largely isolated from
the outside world as a result of the external closure in place, and the increasing levels of violence
experienced there may lead to a humanitarian health crisis.

5. There are reports of decreased access to secondary and tertiary health care. The number of
patients unable to access treatment outside the Gaza Strip increased during the second half of 2007.
The lack of essential spare parts, basic consumables, supplies and medicines further weakened the
health-care delivery system.

6. In June 2006, a WHO-designed tool was introduced in order to improve monitoring of the
impact on health of the evolving situation. Information thus generated has been used to improve
management, direct response and gap filling, and guide humanitarian advocacy. WHO has facilitated
and supported effective communication and the building of strategic partnerships between Israelis and
Palestinians, with the aim of advocating for Palestinians’ access to health services and the promotion
of health as a bridge for peace. A symposium on health was held in the Gaza Strip, with the
participation of both Israeli and Palestinian health stakeholders. An outcome of this symposium was
the establishment of an Israeli-Palestinian joint forum on access to health in the Gaza Strip.

DETERMINANTS OF HEALTH IN THE OCCUPIED PALESTINIAN TERRITORY

2. The economic recovery between 2003 and 2005 was reversed in 2006, when the gross domestic
product fell by 8.8%. In the first quarter of 2007 the trend worsened, with a further decrease of 4.2%.
Changes in the structure of the economy have decreased its potential to be self-sustaining and limited
the prospects for long-term growth.

3. In the first half of 2007, the Palestinian Authority’s deficit was US$100 million per month.
Although the Government of Israel released clearance revenues that had been withheld in June 2007,
the Authority’s wage bill exceeds its revenues. The situation is exacerbated by the limited ability to
increase domestic revenues given the loss in value-added tax and customs duties due to the suspension
of Gaza’s trade.

4. External assistance during the first half of 2007 amounted to nearly US$ 450 million. The
Palestinian Authority estimated that at least US$ 1620 million in donor assistance would be needed
annually in order to close its fiscal gap, with 94% of that sum being used to meet recurrent
expenditures.