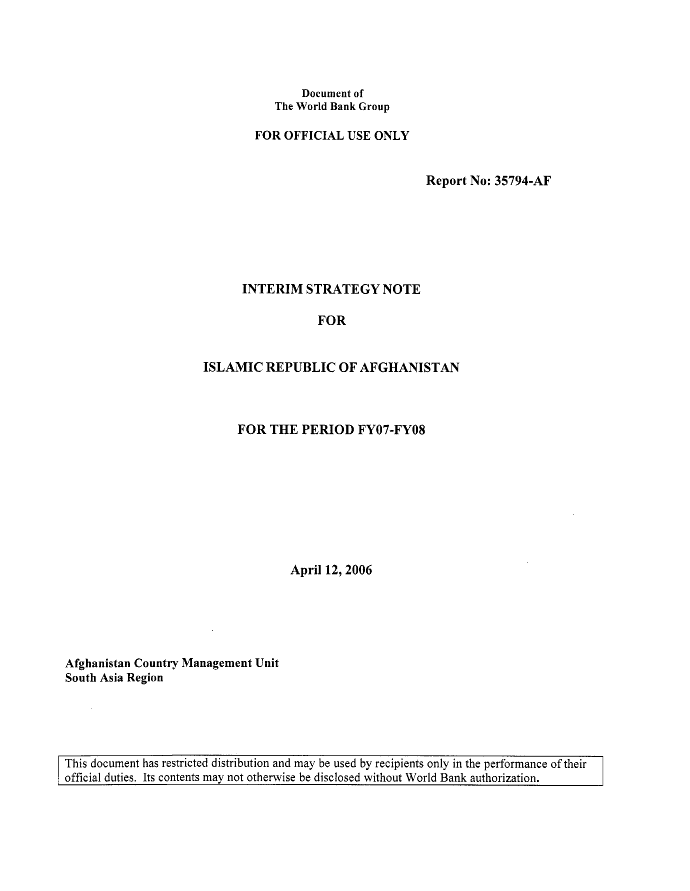 i. Afghanistan’s political transformation, implemented according to the 200 1 Bonn Agreement was successfully concluded in late 2005. As a result o f that historic process, Afghanistan has developed a Constitution, conducted nationwide elections for a President and most recently has elected a Parliament and Provincial Councils. Notwithstanding these timely and commendable achievements, the normalization o f political culture s t i l l has a long way to go.

ii. While the political process has met the exacting “Bonn” targets, there has not
been a parallel improvement in security. Sources o f insecurity are complex ranging from
anti-government groups linked to the former Taliban regime, groups linked to Al-Qaeda,
remnants o f militias allied to commanders and criminal groups often associated with the
narcotics trade. The capacity o f the official state security forces i s improving but the
need for external support for the provision o f security remains high.

iii. In many parts o f the country, and despite the unmet expectations o f some o f the
population, it i s clear that progress in some sectors has been impressive – development o f
road networks has reduced travel times and improved rural access; school enrollments
have reached historic highs; health facilities are gaining outreach; thousands o f rural
communities have been mobilized for development; commercial banks have opened up
for business and microfinance programs have extended services to thousands,
predominantly women. Real GDP, excluding opium production, i s projected to grow by
14 percent in 2005/06 (SY1384), following increases o f 29 percent in 2002/03, 16
percent in 2003/04, and 8 percent in 2004/05. These, as well as many less tangible, but
equally important, achievements, such as in public financial management and budget
formulation, are truly commendable. However the situation i s far from normalized and
the country has not yet fully emerged from its state o f conflict. For every success, there
remain numerous challenges which will take a number o f years to address.

iv. The need for an ongoing long-term engagement has been recognized by the
international community and was endorsed at a high-level conference held in London in
January 2006 which provided a forum to launch the “post-Bonn” agenda for Afghanistan.
A significant feature o f this agenda i s the Compact which provides twenty seven
benchmarks to be achieved within the next five years. The benchmarks for the Compact
were drawn from the Government’s Interim Afghan National Development Strategy
(AI ND S).

v. The IANDS, completed in January 2006, i s built around three pillars: (i)S ecurity;
(ii) Governance, Rule of Law and Human Rights; and, (iii) Economic and Social
Development. The strategy provides a vision of development based on private-sector-led
growth supported by a lean state, which uses the budget as i t s key policy instrument and
aid coordination tool. The Government has formally submitted the IANDS to the World
Bank and IMF as i t s Interim Poverty Reduction Strategy (IPRSP) and aims to produce a
PRSP by mid-2007.

vi. Buoyed by the early gains in Afghanistan, the Bank’s 2003 Transitional Support
Strategy (TSS) anticipated a more rapid transition from i t s emergency post-conflict status
to a more ‘normalized’ situation. Time has demonstrated however that despite the
progress made many elements o f that post-conflict situation remain – capacity i s uneven
and weak overall, systems and procedures are rudimentary, though improving, and many
areas o f the country are seriously affected by conflict. These issues, along with the poor
security situation and the limited capacity o f the state to demonstrate i t s presence around
the country, highlight the fact that peace remains fragile.

vii. Given the ongoing transitional situation in the country, the Bank has developed
this Interim Strategy Note (ISN) anticipated to guide the Bank’s engagement over a twoyear
period. By that time the government plans to have developed i t s full PRSP, paving
the way for preparation o f a Country Assistance Strategy. Bank support under this I S N i s
anticipated to shift slightly from the previous TSS, notably to provide greater emphasis
on development o f the rural economy. The pillars o f the new strategy are:

0 Building the capacity of the state and its accountability to its citizens to
ensure the provision o f services that are affordable, accessible and of
adequate quality.

0 Promoting growth of the rural economy and improving rural
livelihoods.

0 Supporting growth of a formal, modern and competitive private sector.
viii. IDA resources, currently entirely grants, will support activities within each pillar,
while analytical support will be directed at priority policy inputs. Major reports will
focus on key topics emerging as challenges – public administration and corruption.
Progress on implementation o f existing operations will be a key determinant in providing
additional resources to sectors within which the Bank i s already involved. The program
will take a more focused approach to capacity building – which i s a critical constraint to
the development program.

ix. The risks o f operating in Afghanistan should not be underestimated. Despite the
considerable progress achieved through the Bonn process, daily events remind us that
security remains a major constraint and there are no immediate indications o f it
improving. Contingency plans for the country office are in place to deal with increased
security problems. Other risks, such as corruption and fiduciary concerns are mitigated
to some extent through the proposed program. 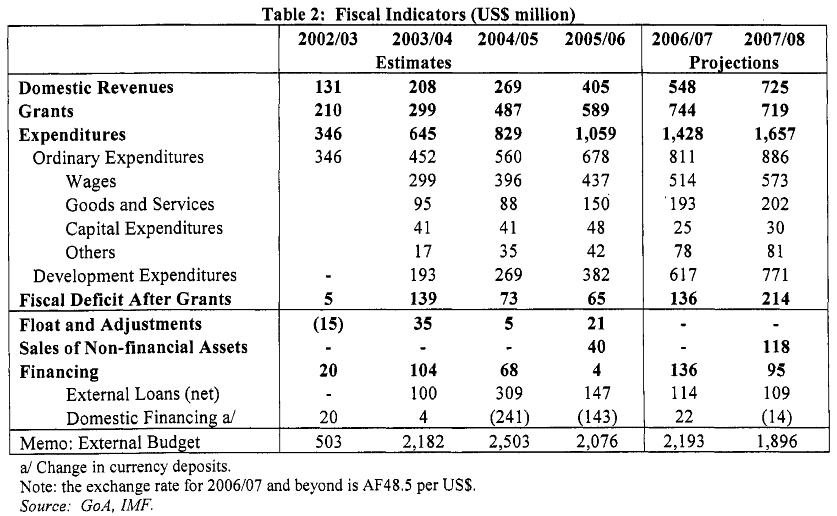 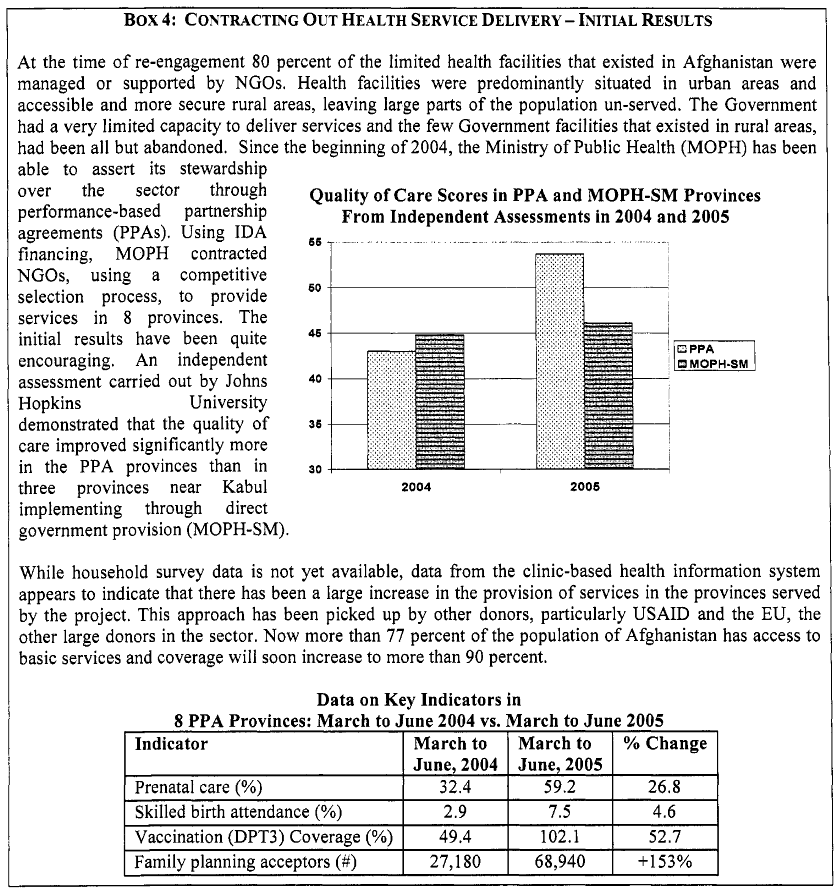