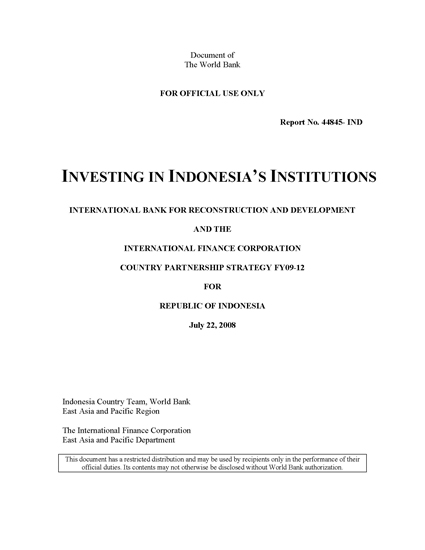 1. This Country Partnership Strategy (CPS) for FY2009-12 marks Indonesia’s re-emergence as a confident middle-income country (MIC) that has graduated from IDA, and is enjoying a rising regional and global standing. With a Government that is demanding dependable and timely support for its own development priorities and its poverty-reduction agenda, this CPS positions the World Bank Group (WBG) to respond better to these challenges, thereby ensuring the WBG’s continued relevance in the new Indonesia.

2. Ten years ago, Indonesia was in the middle of an extremely severe economic crisis. Today, Indonesia is a different country. It has embarked upon a far-reaching institutional transformation and has become one of the region’s most vibrant democracies. Its sub-national
governments are now major players in service delivery. The fight against corruption has moved to
the center of the Government’s program and relevant institutions have been strengthened.

3. In social and economic terms, Indonesia has also seen much progress. Its real GDP has
been growing at 5 to 6 percent annually since 2002. Prudent fiscal management and a strategy of
fiscal consolidation have continued the significant reduction in government debt levels. Inflation
has largely been kept under control and Indonesia has a strong balance of payments, with record
exports. Public investment has steadily increased over the past five years. Poverty has declined
and public services are receiving additional resources, including through community-driven
development programs.

4. While Indonesia is doing well it could be doing far better across the areas of poverty
reduction, service delivery and governance. In 2007, nearly half of Indonesia’s population was
still either poor or had per-capita consumption levels of less than one-third above the national
poverty line. Employment growth has been slower than population growth. Public services
remain inadequate for a middle-income economy. Many regions, especially in eastern Indonesia,
are lagging behind and Indonesia is doing particularly poorly in a number of health and
infrastructure related indicators. As a result, Indonesia may yet fail to reach several of its MDG
targets.

5. In meeting these challenges Indonesia’s main constraint today is not a lack of financial
resources but the need for effective and accountable institutions that can translate available
resources into better development outcomes. For this reason, “Investing in Indonesia’s
Institutions” is the theme of the CPS. This focus also recognizes that WBG financing now
represents such a small share of Indonesia’s national budget that it can only make a demonstrable
impact if it leverages a much larger share of Indonesia’s own public spending or private
investment.

6. Building on the governance focus of the WBG Country Assistance Strategy for 2004 to
2008, this CPS emphasizes engagements with government counterparts and other stakeholders
who are committed to addressing critical governance and institutional challenges. With this
approach, the WBG wants to support success stories of replicable institutional reform. As such,
the emphasis of the financing and knowledge program will continue to shift towards directly
supporting successful or promising priority programs of the Government. This approach aims to
improve existing government programs, strengthen the institutions involved, both state and nonstate,
and encourage others to replicate them.

7. The application of this “institutional lens” will itself provide a focus for the WBG
program: investment, together with advisory and analytical services, will be concentrated on the
institutions, sectors, systems and programs where this approach is most likely to succeed. In
addition to its cross-cutting engagements to strengthen central and sub-national government
institutions and systems, this CPS identifies five thematic areas that are expected to form the core
of the WBG’s engagement: (i) Private Sector Development; (ii) Infrastructure; (iii) Community
Development and Social Protection; (iv) Education; and (v) Environmental Sustainability and
Disaster Mitigation.

8. However, this list of core engagements is dynamic and some of these areas may change,
especially as Indonesia will be holding general elections in 2009 and the Government’s mediumterm
development plan (RPJM) for 2010-2014 will be launched in 2010. The WBG’s capacity to
implement this strategy will therefore depend on a degree of flexibility in its program and also on
its capacity to build and maintain relationships in other areas where new opportunities may
emerge.

9. Implementing this strategy will also require some flexibility in the WBG’s financing
instruments and envelope. The two factors that will determine the level of engagement, demand
and performance, are prone to change across sectors, particularly in view of the upcoming
elections, and cannot be predicted with accuracy for the entire CPS period. However, the
Government’s results in implementing the reform agenda, including through development loans,
Indonesia’s strong macroeconomic progress and Indonesia’s financing needs, together make a
strong case for reversing the decline in recent years in the International Bank for Reconstruction
and Development (IBRD) exposure.

10. A notional annual IBRD investment of about US$2 billion is expected. Actual annual
lending volumes could vary significantly up or downwards, but will be commensurate with
continued robust macroeconomic performance, financial stability and momentum on key reforms.
IFC expects to invest about US$300 million annually in the priority sectors of finance,
infrastructure and commodity-based supply chains. The investment program is expected to grow
in the event of an acceleration of reform in private infrastructure provision.

11. Trust funds and grant financing through trust funds will continue to be an integral part of
the WBG program. The majority of trust funds will be aligned with the WBG’s core engagement
areas. Trust funds also allow for knowledge engagements outside these areas and support the
harmonization and alignment of funding from various development partners behind core
government programs.

12. While the share of the WBG’s financial contribution to Indonesia’s development is
expected to decline as the economy expands, knowledge partnerships will become ever more
important. The WBG will build on its existing program of analytical and advisory services, and
align this program with its core engagements. In doing so the WBG will also ensure that
analytical and technical support strengthens national institutions and country systems and,
increasingly, will have this type of work led by, and based within, Indonesian institutions.

13. This CPS is designed to use the WBG’s limited resources to better meet Indonesia’s
needs and aspirations as a middle-income country. By leveraging Indonesia’s own institutions,
the CPS aims to help the country to move to the next phase of its ongoing and incomplete
transformation — a phase that once complete will allow Indonesia to take its place among
Southeast Asia’s most successful economies.