The following report on the Kabul Bank crisis was released in November 2012 by the Afghan Independent Joint Anti-Corruption Monitoring and Evaluation Committee. 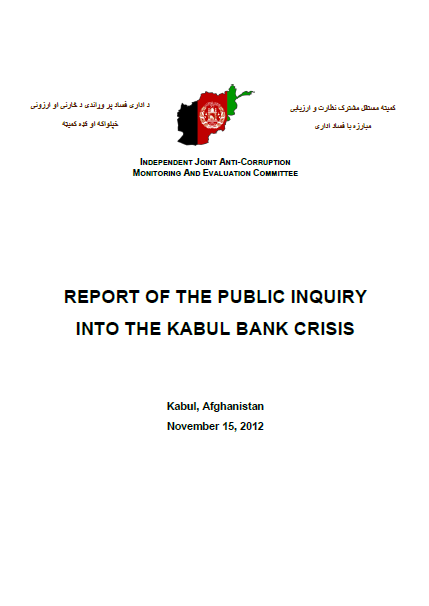 Kabul Bank’s controlling shareholders, key supervisors and managers led a sophisticated operation of fraudulent lending and embezzlement predominantly through a loan-book scheme. This resulted in Kabul Bank being deprived of approximately $935 million funded mostly from customer’s deposits. The loan-book scheme provided funds through proxy borrowers without repayment; fabricated company documents and financial statements; and used information technology systems that allowed Kabul Bank to maintain one set of financial records to satisfy regulators, and another to keep track of the real distribution of bank funds. Shareholders, related individuals and companies, and politically exposed people were the ultimate beneficiaries of this arrangement. Over 92 percent of Kabul Bank’s loan-book – or approximately $861 million – was for the benefit of 19 related parties (companies and individuals). Except for the initial investment of $5 million, all shareholder acquisitions and transfers were ultimately funded by money from Kabul Bank.

Loan funds were transferred shortly after an account was opened (in some cases even before the supporting documents were completed) through fake SWIFT messages and invoices created by Kabul Bank’s Credit Department itself. Actual disbursements were made through electronic payments or cash from the Bank’s vault. The funds eventually made their way to the true beneficiaries, were used to acquire assets for management, or were withdrawn in cash. Electronic transfers had the appearance of being transferred to overseas suppliers, or for other legitimate purposes. Some cash was transferred through the Kabul Airport using Pamir Airways, which was owned by shareholders related to Kabul Bank. Repayment of loans was rare, and most often new loans were created to provide the appearance of repayment.

Failure of regulatory and supervisory efforts

There were several opportunities for various national and international bodies to detect and prevent Kabul Bank’s fraudulent activities. The collective failure of banking oversight and enforcement is one of the many contributing factors that allowed hundreds of millions of dollars to be diverted from important Afghan priorities to the personal bank accounts and business enterprises of a few individuals, including the Bank’s shareholders and management.

The earliest opportunity was presented at the licensing stage where it appears that the personal, financial and criminal backgrounds of shareholders, supervisors and managers were not sufficiently reviewed. The Kabul Bank promoters submitted a business plan, articles of association, and some personal and financial disclosures, presenting a picture of competent management with decades of banking experience. However, Da Afghanistan Bank only reviewed the ex-Chairman’s suitability because he was the only shareholder with sufficiently large shareholdings. The suitability of other shareholders was not extensively reviewed. In conducting their background check, Da Afghanistan Bank submitted names to the Ministry of Interior in April 2004, which were cleared in September 2004, several months after Kabul Bank had begun to operate. It is unclear how extensively the Ministry of Interior’s background check was, but it is unlikely that a criminal check at this time would have identified the founder and ex-Chairman as a fugitive from the Russian Federation because this information had not been shared through Interpol until well after the licensing of Kabul Bank.

Kabul Bank’s illicit activities commenced soon after its licensing, but regulatory and law enforcement agencies did not effectively intervene. The capacity of Da Afghanistan Bank to regulate and supervise banks at this time was low. It was not until 2007 – over two-years since Kabul Bank was licensed – that onsite examinations of banks were conducted in Afghanistan. However, throughout the period between 2007 and September 2010, Da Afghanistan Bank carried out four general examinations of Kabul Bank, undertook three special examinations, and took enforcement measures or corrective actions four times.

Supervisory efforts consistently identified regulatory violations related to governance, loan files, and promotional incentives to gain new depositors. None of these efforts identified the extensive fraud occurring at the Bank, partially due to the sophistication of the Bank’s attempts to hide the fraud and partially due to Da Afghanistan Bank’s lack of capacity and failure to use investigative techniques. Additionally, several efforts to take enforcement action against the Bank were met with interference and were not implemented, including an attempt by Da Afghanistan Bank to limit incentive programs to attract depositors and an attempt by the Financial Transactions and Reports Analysis Centre of Afghanistan to issue a fine.

International support was required to bridge the gap between Da Afghanistan Bank’s capacity and requisite levels of supervision leading to the design of programs to develop financial regulatory and supervisory capacity. This international assistance predominantly came in the form of the United States Agency for International Development’s Economic Growth and Governance Initiative which ran from 2005-2011. However, the program was not capable of developing sufficient capacity at Da Afghanistan Bank to detect the fraud at Kabul Bank, nor did the program’s implementing partners – Bearing Point and later Deloitte – detect the fraud or act sufficiently upon fraud indicators.