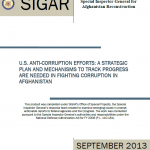 The large-scale population survey on the extent of bribery and four sector-specific integrity surveys of public officials undertaken by UNODC and the Government of Afghanistan in 2011/2012 reveal that the delivery of public services remains severely affected by bribery in Afghanistan and that bribery has a major impact on the country’s economy. In 2012, half of Afghan citizens paid a bribe while requesting a public service and the total cost of bribes paid to public officials amounted to US$ 3.9 billion. This corresponds to an increase of 40 per cent in real terms between 2009 and 2012, while the ratio of bribery cost to GDP remained relatively constant (23 per cent in 2009; 20 per cent in 2012).

Kabul Bank’s controlling shareholders, key supervisors and managers led a sophisticated operation of fraudulent lending and embezzlement predominantly through a loan-book scheme. This resulted in Kabul Bank being deprived of approximately $935 million funded mostly from customer’s deposits. The loan-book scheme provided funds through proxy borrowers without repayment; fabricated company documents and financial statements; and used information technology systems that allowed Kabul Bank to maintain one set of financial records to satisfy regulators, and another to keep track of the real distribution of bank funds. Shareholders, related individuals and companies, and politically exposed people were the ultimate beneficiaries of this arrangement. Over 92 percent of Kabul Bank’s loan-book – or approximately $861 million – was for the benefit of 19 related parties (companies and individuals).

An Open Source Center translation of a decree issued by Hamid Karzai in July 2012 on fighting corruption in Afghanistan.

A presentation from the ISAF CJIATF-Shafafiyat on “Countering Corruption and Organized Crime to Make Afghanistan Stronger for Transition and a Good Future” dated March 2012.

Security for the U.S. Supply Chain Is Principally Provided by Warlords. The principal private security subcontractors on the HNT contract are warlords, strongmen, commanders, and militia leaders who compete with the Afghan central government for power and authority. Providing “protection” services for the U.S. supply chain empowers these warlords with money, legitimacy, and a raison d’etre for their private armies. Although many of these warlords nominally operate under private security companies licensed by the Afghan Ministry of Interior, they thrive in a vacuum of government authority and their interests are in fundamental conflict with U.S. aims to build a strong Afghan government.

A 466-page summary of a more than 25,000-page report compiled by the Indian government’s Karnataka Lokayukta or People’s Commissioner who investigated years of illegal activities in the Indian mining sector, including widespread corruption, bribery and the exportation of illicit iron ore worth more than $3 billion. The report has met with widespread controversy due to its singling out of a number of prominent billionaires in the Indian mining industry.

In May 2011, the USAID Office of the Inspector General published a report on the agency’s supervision and oversight of assistance activities in Afghanistan and the Kabul Bank crisis. This report was quickly withdrawn and the Federation of American Scientists’ Steven Aftergood quoted a USAID official as saying that “At the time our report was issued, it was written utilizing information from non-classified sources. After our report had been issued, USAID subsequently classified two documents that were cited in our report. This action resulted in the report becoming classified and we removed it from the web site.” Now that an “Unclassified” version of the report has been released, a comparison of the two versions reveals the “classified” portions of the report that were concealed by USAID. These sections of the report indicate that a material loss review was commissioned by USAID/Afghanistan and completed in May 2010 indicating that $850 million, or 94 percent of the value of the bank’s outstanding loans, had been fraudulently diverted to “insiders” connected with the bank. The concealed sections also indicate that Deloitte and Da Afghanistan Bank failed to provide this report to USAID for nearly six months.

Because an extensive, well maintained network of roads is essential for economic development, road construction and maintenance projects have been a mainstay of the World Bank’s lending portfolio since its founding. This long experience in the roads sector is reflected in favorable project evaluations. The Bank’s Independent Evaluation Group reports that roads and other transport projects consistently score higher on measures of outcomes, institutional development, and sustainability than non-transport projects and the Bank’s Quality Assurance Group has found that roads projects are well-supervised. At the same time, roads projects around the globe remain plagued by fraud, corruption, and collusion. A Transparency International poll ranked construction as the industry most prone to corruption and a survey of international firms revealed that companies in the construction industry were more likely than firms in any other sector to have lost a contract because of bribery. World Bank-financed projects are not immune. Roughly one-fourth of the 500 plus projects with a Bank-funded roads component approved over the past decade drew one or more allegations of fraud, corruption, or collusion; to date, the Bank’s Integrity Vice Presidency (INT) has confirmed allegations in 25 projects resulting in 29 cases of misconduct under Bank rules.

Stability in Afghanistan – where it exists – is terribly fragile. Security is a daily concern for Afghan people, and even those living in more secure areas of the country face a fluid and volatile security situation that sees rapid changes, often for the worse. Central government control is tenuous, especially in rural areas and parts of the country that are the scene of conflict with insurgents. Access to even the most basic of government services – health, education, electricity – is tenuous at best and often unavailable. Complicating matter exponentially is the extreme poverty of Afghanistan – a country struggling with some of the most daunting statistics in the world for literacy, maternal mortality, food security, and life expectancy. In this context, simply to survive from one day to the next is a terrible challenge for many people.

The Washington Post has changed significant portions of an article published earlier today regarding the CIA’s payment of large numbers of people within Hamid Karzai’s administration in Afghanistan. These changes occur mostly in the beginning of the article and substantially manipulate its content. Most notable among the changes is the complete elimination of a quote describing how “half of Karzai’s palace” is on the CIA payroll. This quote, from an anonymous U.S. government official, was replaced with a paraphrased statement that “a significant number” of officials in Karzai’s administration are paid by the CIA. This alteration is followed by a quote from a CIA spokesman, which does not appear in the original article, who says that the “anonymous source appears driven by ignorance, malice or both.” Another significant quote from this anonymous source, detailing how Kazai is “blind to about 80 percent of what’s going on below him”, was also completely eliminated from the article. There are also a number of smaller changes all of which are designed to eliminate the perception of ignorance, malfeasance, and public perception that the Afghan government is almost wholly owned by the CIA.