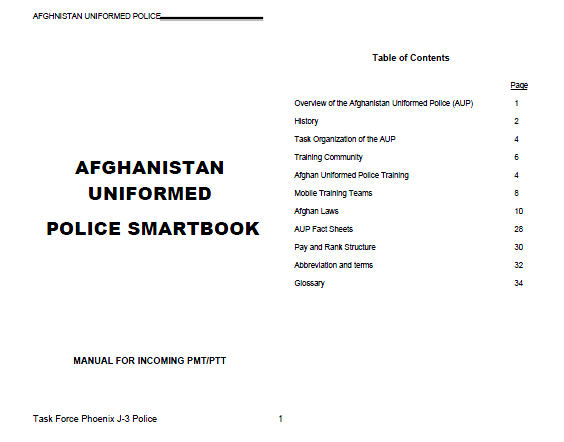 Task Force Phoenix has been working in partnership with other nations in training the Afghan Uniformed Police. Civilian Mentor Teams are mentoring senior police leadership at the Kabul police academy. The U.S. is providing basic training courses at a central training facility in Kabul and eight Regional Training Centers in other provinces.

More than 62,000 members of the Afghan Uniformed Police, Afghan National Auxiliary Police, and Border Police have completed Police Academy Training programs at U.S. facilities. Over 12,000 have also completed more advanced training courses in specialized areas such as firearms, crowd control, investigative techniques, and domestic violence. In the past year, the Task Force Phoenix has enhanced the Afghan National Police training program with over 200 Mobile training teams and advisors around the country.

As part of a major pay and rank reform program, the U.S. and international partners are helping the Afghan Uniformed Police leadership to build a merit-based leadership and discipline structure to assure that the Police become widely-respected public servants and officers of a society based on the rule of law.

For years, the existing leadership structure in the MOI, which includes the police and border guards, has been replete with corruption, blackmail and human rights violations. As such, Germany and the U.S. have led a Rank Reform initiative to completely overhaul and replace the existing leadership structure and composition within the Ministry of the Interior (MOI). This process is in its infancy (began October 2005).

UN, Germany, and the US have conducted background checks on all eligible candidates to ensure that no future leaders of the MOI have Human Rights violations or records of corruption in their past. The officers already selected have no proven record of Human Rights violations, nor are there any corroborated indications that have participated in corrupt activities.

Concurrent with rank reform, salary reform will be implemented in phases. As billets are restructured, pay increases will be incrementally implemented with a target completion date that corresponds with the completion of rank reform in September of 2006.

There is an inextricable link between Rank Reform and Pay Reform. The Afghan nation needs a security force whose pay is commensurate with their level of responsibility and the Pay Reform process brings that concept to fruition.

Rank and Pay Reform constitute two key pillars necessary to shape the “way ahead” for the Afghan government and the AUP while maintaining a secure environment for its citizens and upholding the rule of law. Together these initiatives will produce a well-paid police force, which will eliminate corruption and instill confidence by the Afghan populace in the AUP.