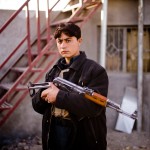 “First time I ever saw an Afghan Police Station I thought it was something straight out of the dark ages, complete with zero electricity, mud structure, and no sewage drainage. Immediately I knew this mission would be challenging and wondered what the heck I got myself into?” This quote from a U.S. Army Captain is just one example of the unusually blunt assessments contained in the Joint Center for International Security Force Assistance (JCISFA) guide for advising the Afghan National Police (ANP). The 2010 version of the JCISFA ANP Mentor Guide, which was obtained by Public Intelligence along with a guide for troops assisting the Afghan National Army (ANA), contains a number of revealing observations on the often poor condition of Afghan National Security Forces, in particular the ANP. 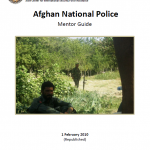 Afghanistan presents a unique challenge to U.S. Army forces in the geographical, cultural, economic, political, and security dimensions. Providing protection and security to a unique and diverse tribal population is an essential aspect of our counterinsurgency strategy. The proficiency, integrity, and loyalty of Afghan police forces are essential to accomplishing a secure environment and to sustaining success. The following articles cover a range of issues related to SFA and the training of Afghan national police and border police with the specific intent of establishing best practices and lessons learned. The collection should not be considered all-inclusive. This is an effort to capture relevant articles published in recent professional journals or maintained by the Center for Army Lessons Learned (CALL) and other joint archives to inform Soldiers about relevant observations, insights, and lessons and to provide a historical document for future reference.

This paper provides a comprehensive introduction to Afghanistan’s various police agencies, where their authority originates, how they are organized, and the stated purpose and responsibility of each. The paper does not include status or capability information on these agencies with the intent to preserve its utility as a long-lasting reference document. The reader should refer to the IJC IDC’s State of the ANSF and other available intelligence and open source products for current status and capability information on Afghan police agencies.

Task Force Phoenix has been working in partnership with other nations in training the Afghan Uniformed Police. Civilian Mentor Teams are mentoring senior police leadership at the Kabul police academy. The U.S. is providing basic training courses at a central training facility in Kabul and eight Regional Training Centers in other provinces. More than 62,000 members of the Afghan Uniformed Police, Afghan National Auxiliary Police, and Border Police have completed Police Academy Training programs at U.S. facilities. Over 12,000 have also completed more advanced training courses in specialized areas such as firearms, crowd control, investigative techniques, and domestic violence. In the past year, the Task Force Phoenix has enhanced the Afghan National Police training program with over 200 Mobile training teams and advisors around the country.

An October 18, 2011 update prepared by NATO Training Mission Afghanistan (NTM-A) to COMISAF regarding the Afghan National Police (ANP) current status and way-ahead as the Afghans prepare to take the lead.

From October 2010 to August 2011, the United Nations Assistance Mission in Afghanistan (UNAMA) interviewed 379 pre‐trial detainees and convicted prisoners at 47 detention facilities in 22 provinces across Afghanistan. In total, 324 of the 379 persons interviewed were detained by National Directorate of Security (NDS) or Afghan National Police (ANP) forces for national security crimes ‐ suspected of being Taliban fighters, suicide attack facilitators, producers of improvised explosive devices, and others implicated in crimes associated with the armed conflict in Afghanistan. Interviews were conducted at facilities including ANP detention centres, NDS facilities, Ministry of Justice prisons and juvenile rehabilitation centres; as a result of transfers, the interviews dealt with detainees located in 24 of Afghanistan’s 34 provinces. With two exceptions, Government officials from the ANP, NDS, Ministry of Justice and other departments cooperated with UNAMA and provided full access to detainees and facilities. UNAMA acknowledges the critical and extremely difficult role that NDS and ANP have in safeguarding national security in the current situation of armed conflict in Afghanistan. Torture and Abuse of Detainees by NDS and ANP UNAMA’s detention observation found compelling evidence that 125 detainees (46 percent) of the 273 detainees interviewed who had been in NDS detention experienced interrogation techniques at the hands of NDS officials that constituted torture, and that torture is practiced systematically in a number of NDS detention facilities throughout Afghanistan. Nearly all detainees tortured by NDS officials reported the abuse took place during interrogations and was aimed at obtaining a confession or information. In almost every case, NDS officials stopped the use of torture once detainees confessed to the crime of which they were accused or provided the requested information. UNAMA also found that children under the age of 18 years experienced torture by NDS officials. More than one third of the 117 conflict‐related detainees UNAMA interviewed who had been in ANP detention experienced treatment that amounted to torture or to other cruel, inhuman or degrading treatment.

CSTC-A requires contracted life support services, to include training facility force protection, in the areas identified in the chart below. These efforts directly support the US and NATO missions to develop a trained and professional Afghan police force, enhancing public security, and supporting the rule of law in Afghanistan. Facilities covered under this requirement support various aspects of the training of the ANP, including providing life support for mentors and trainers of the Afghan government, USFOR-A, and Coalition Forces who support the training of the ANP. Due to the changing nature of combat support requirements, the Contractor shall expect that quantities, types, and/or locations of the services to be required within this geographic area will change over the Period of Performance.