The following draft environmental assessment for the U.S. Army Cyber Command and Control Facility proposed at either Fort Meade or Fort Gordon was released in August.  The document contains significant details about the proposed facility which will be at least 179,056 square feet in size and reportedly house as many as 1,500 personnel. 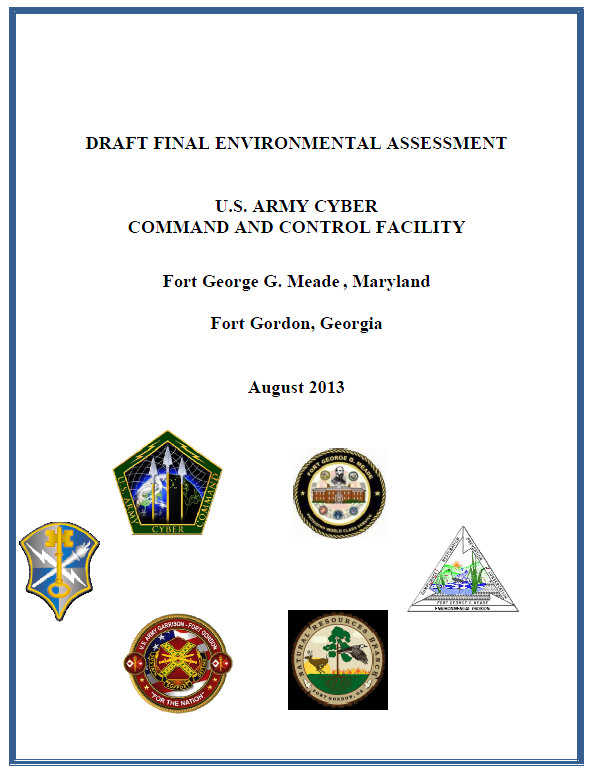 This Environmental Assessment (EA) has been prepared to analyze the potential environmental, cultural, transportation, and socioeconomic effects associated with the establishment and operation of a U.S. Army Cyber Command / 2nd Army (ARCYBER) Command and Control Facility at Fort George G. Meade, Maryland (hereinafter referred to as Fort Meade), or at Fort Gordon, Georgia. ARCYBER leads a corps of 21,000 soldiers and civilians who serve worldwide operating and defending all Army networks with supporting organizations such as the Army Network Enterprise Technology Command, 780th MI Brigade, and 1st Information Operations. ARCYBER plans, coordinates, integrates, synchronizes, directs, and conducts network operations and defense of all Army networks; when directed, ARCYBER conducts cyberspace operations in support of full spectrum operations to ensure U.S./Allied freedom of action in cyberspace, and to deny the same to our adversaries.

Fort Gordon was established in 1941. It encompasses approximately 55,600 acres in east central Georgia. The majority of the installation and the entire cantonment area lie within Richmond County, with a small portion of the training area in Jefferson, Columbia, and McDuffie counties. Fort Gordon is the largest communications training facility (offering 130 courses to 16,000 troops per year) in the Armed Forces, and is the focal point for the development of tactical communications and information systems.

PURPOSE AND NEED FOR THE PROPOSED ACTION

The purpose of the Proposed Action is to construct a new facility or renovate existing buildings to accommodate an anticipated workforce of up to 1,500 active duty military, government civilian, and contract personnel at either Fort Gordon or Fort Meade. With the anticipation of expanding the existing workforce of approximately 499 personnel to upwards of 1,500 personnel, a centralized Command and Control Facility is needed to maximize operational efficiency.

DESCRIPTION OF THE PROPOSED ACTION AND ALTERNATIVES

ARCYBER proposes to establish and operate a Command and Control Facility at Fort Meade or Fort Gordon. The establishment would be accomplished by constructing a new facility or renovate existing buildings to accommodate an anticipated workforce of up to 1,500 active duty military, government civilian, and contract personnel. Once established, approximately 156 personnel at Fort Meade and approximately 343 personnel at Fort Belvoir would relocate to the new Command and Control Facility. The EA analyzes three courses of actions: Fort Meade Course of Action, Fort Gordon Course of Action, and the No Action alternative. Within the Fort Meade and Fort Gordon Courses of Action, a total of seven site locations were considered. A description of each course of action is provided below.

Fort Meade Course of Action: Interim stationing would not be necessary at the Fort Meade location. Final stationing options at Fort Meade include the following two site alternatives:

Fort Gordon Course of Action: Interim stationing would be required during construction. During this time, current personnel located at Fort Belvoir and Fort Meade would be temporarily relocated to several buildings within Back Hall Campus at Fort Gordon. Renovation to these buildings may be required to accommodate the temporary stationing. Final stationing options at Fort Gordon include the following five site alternatives, all located within the cantonment area:

No Action Alternative: Under the No Action alternative, ARCYBER functions would continue to be conducted in existing locations at Fort Meade or Fort Belvoir. Operational efficiency would continue to suffer as a result of coordinating operations occurring at two geographical separated units using substandard communication infrastructure. Moreover, ARCYBER would be limited in their ability to meet operational requirements by restricting workforce growth due to inadequate space accommodations. 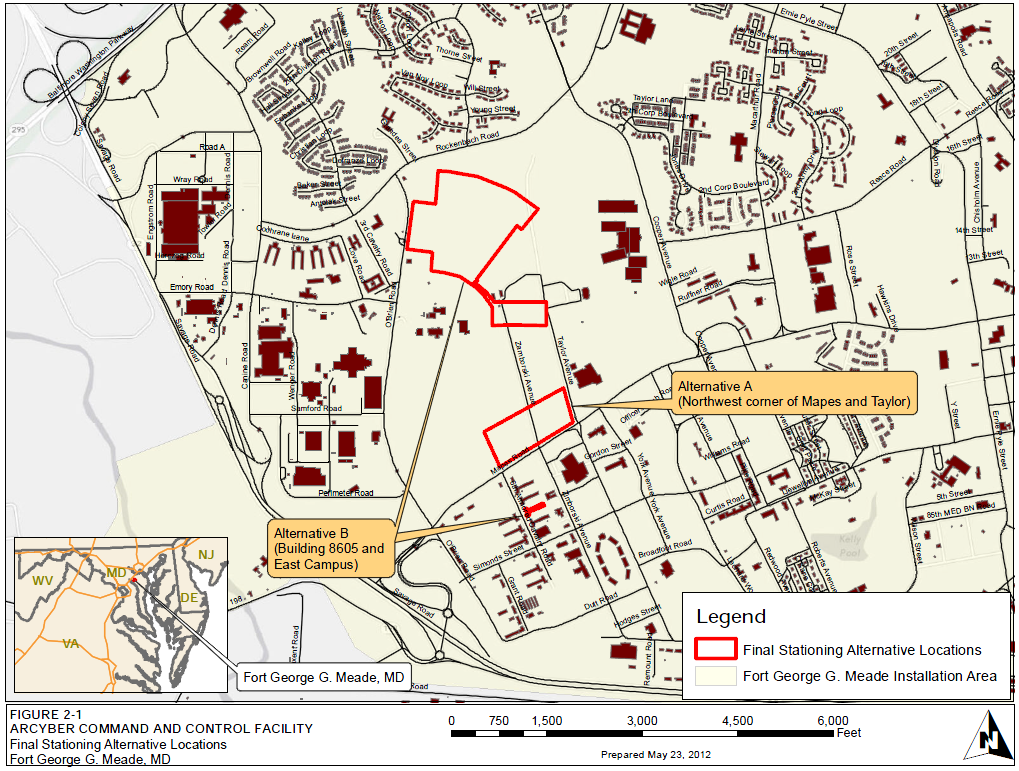