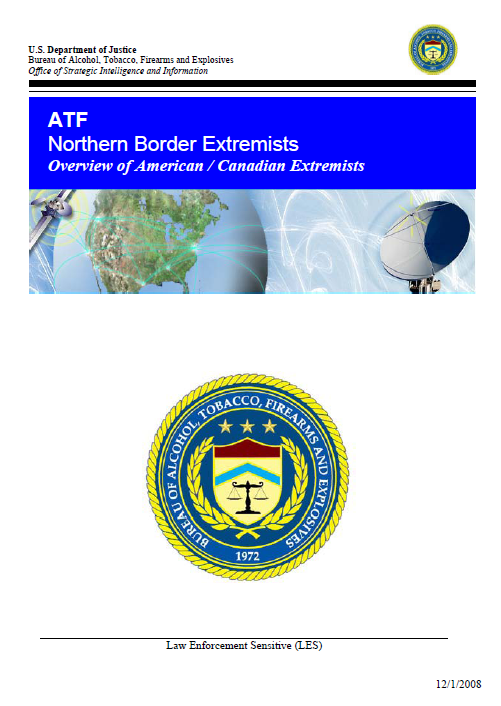 According to information obtained via the Southern Poverty Law Center (SPLC), the number of hate groups operating with the United States has risen and continues to rise. In 2006, law enforcement intelligence and SPLC information counted 844 organizations in 2007; this number has risen to 888, an increase of approximately 4.7 percent. This number may seem small; however, during an 8-year time period, this has translated into a 48-percent jump in the number
of groups since 2000, when there were 602 hate groups operating in the United States, according to research by the intelligence project of the SPLC. Much of the expansion has been driven by hate groups’ exploitation of the issue of illegal immigration, which most Americans see as a pressing concern. This overview addresses the issue of American and Canadian extremism in Canada and in those States that fall along the American-Canadian border.

Federal law enforcement officials believe White supremacists and other hate groups consist of some of the most violent and dangerous domestic organizations because of their willingness to act on their hatred. While traditional targets of hate groups have been African Americans and Jews, White supremacists have enhanced their focus in recent years to include homosexuals, prochoice advocates, Hispanics, and Asians.

America, unfortunately, has no shortage of extremists. Some come from the far right, in the
form of racist and anti-Semitic hate groups or anti-government extremists. Others come from the
far left, which include environmental and animal rights extremists.
At the same time as the United States enacted its Hate Crimes Statistics Act of 1990, which
lobbied to recognize the impact of crimes motivated by hatred, hate crimes commenced in
Canada. Although the term hate crime is commonly used today, little consensus exists as to its
exact meaning. Although most definitions list a number of identifiable traits based on race,
religion, and ethnicity, differences remain.

To date, more than 40 States have enacted hate crime legislation. Of these, 21 States and the
District of Columbia also include sexual orientation as a protected status.

In Canada, some of these definitional issues are currently being addressed. To date, Canada has
no centralized system for collecting national police-reported statistics relating to hate-motivated
crimes. Offenders of hate crimes have been associated with organizations such as Neo Nazis,
Skinheads, and the Ku Klux Klan. At the root of extremism are radical ideologies and religious
beliefs, held in anger and frustration, which can lead to violent acts ranging from hate crimes to
terrorism.

Hate and extremist activity are also flourishing through new electronic avenues such as the
Internet. Monitoring this activity at both the national and international levels remains difficult at
best in both Canada and the United States.

Rightwing extremists reject Federal Authority and are in favor of State or local government.
They are concerned with preserving the Constitution, including their right to liberty and privacy.
These extremists are nationalistic and may embrace racist views or multiple belief systems. This
group consists of the following:

The militia movement is a relatively new rightwing extremist movement consisting of armed
paramilitary groups, both formal and informal, with an anti-government, conspiracy-oriented
ideology. Militia groups began to form shortly after the deadly standoff at Waco, Texas, in
1993. By the spring of 1995, they had spread to almost every State. Many members of militia
groups have since been arrested, usually on weapons, explosives, and conspiracy charges.
Although the militia movement has declined in strength from its peak in early 1996, it remains
an active movement, especially in the Midwest, and continues to cause a number of problems for
law enforcement.

Groups or individuals that believe Caucasians/Aryans are intellectually and morally superior to
other races and use their racist ideology to commit crimes, acts of violence, and terrorism are
called White supremacists. Most advocate racial separation and segregation. White
supremacists are broken down generally into six types: Neo-Nazi, Ku Klux Klan, Christian
Identity, Skinhead, Odinist, or Racist Prison Gangs. The largest two are briefly described below.

To effectively combat the growing violence of the White racist, law enforcement agencies must
continue to cooperate and communicate. Supremacists are transient in nature, and it is not
uncommon for members to travel from city to city committing crimes. Skinheads in particular
have a belief that a crime committed in a locality other than their own is likely to go unnoticed
by law enforcement. Typically their criminal activity is often centered around a major event,
such as a march, rally, or skinhead concert.

Although there was deterioration in the formal structure of these groups in the last few years,
evidence suggests hate group organization is definitely on the rise in Canada. The Canadian
White supremacist community has been scattered and without formal leadership for the last few
years, but Internet recruitment has allowed individuals to align themselves with pre-established
hate groups in urban areas in both Canada and the United States.

It seems as though small arms and improvised explosive devices (IEDs) are the weapons of
choice for supremacists/extremists because they are widely available and easy to construct and
use. Some groups have shown an increased interest since September 11, 2001, in using
chemical, biological, and radiological weapons, raising law enforcement concerns that these
groups may pursue different methods of attack in the future.

The animal and environmental extremists believe companies are responsible for the destruction
of animal habitats and natural resources. In the last couple of years arson has become the tool
most widely used by animal rights and eco-terrorist groups. Law enforcement can become
proactive by identifying and locating logical targets (i.e. construction sites causing
environmental controversies or facilities that use animals for testing) and consider initiating
liaisons with these targets. Law enforcement has made strides prosecuting cells, but has been
unable to end the arsons directed toward housing developments in the United States and Canada.
The abortion issue will continue to be a political topic in the years to come. ATF will continue
to monitor violent (i.e. arsons/bombing) incidents directed toward reproductive healthcare
centers.

In conclusion, there appears to be a significant number of domestic extremist groups operating in
Pennsylvania, New York, Ohio, Michigan, and Washington. The main ideology of these groups
is the supremacy of the White race with disrespect toward the U.S. Government. To date, there
are estimated to be more than 600 members of the neo-Nazi skinhead movement in Canada.
While their numbers declined in the late 1980s, the trend was reversed in the 1990s. With
immigration an issue of the upcoming U.S. Presidential election, law enforcement could expect
to see even more of an increase in hate crimes. It should also be noted that mergers of Canadian
and U.S. groups may possibly take place between racist groups operating along the border as the
United States will have its first African-American President taking office in January 2009. 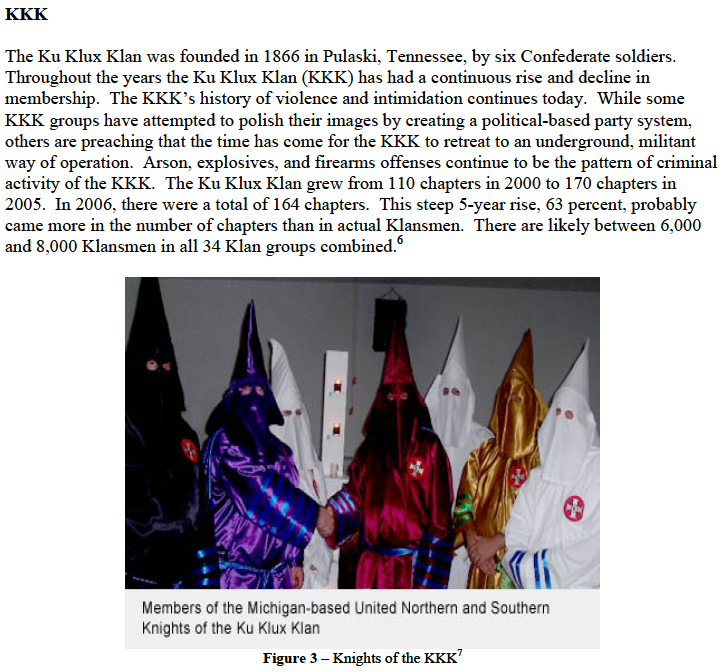 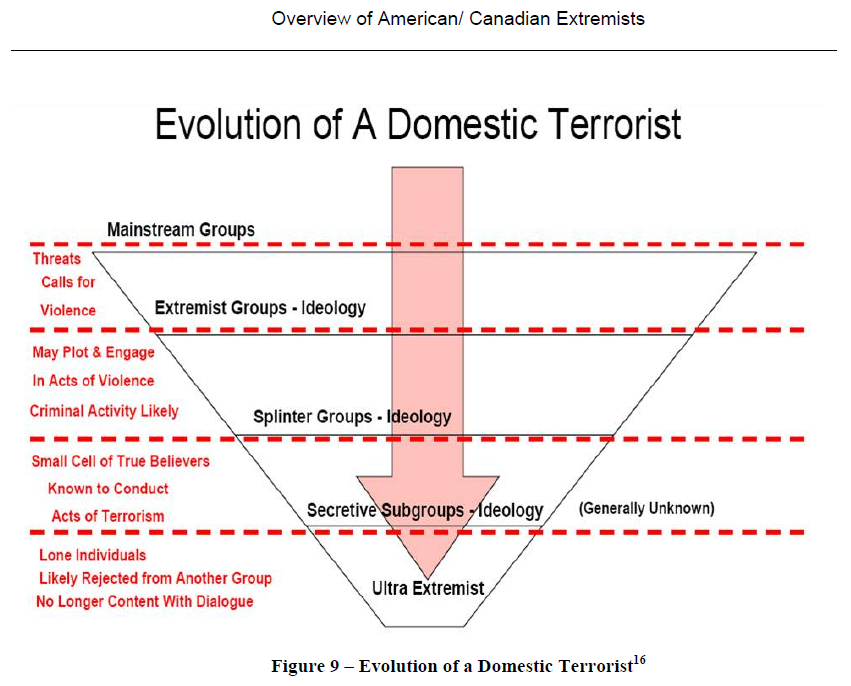