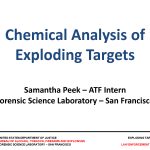 A 2012 ATF presentation discussing the chemical analysis of exploding target products such as Tannerite, 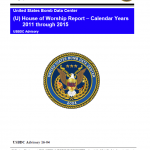 This report serves to present information and analysis associated with fire, arson, and bombing incidents at houses of worship (HOWs) occurring within the United States for the past 5 years, between January 2011 through December 2015, and reported to the Bureau of Alcohol, Tobacco, Firearms and Explosives (ATF). In total, there were 733 fire and explosion related incidents, per ATF reporting, for all 50 States. The information contained herein does not represent all fire, arson and bombing incidents for the United States. This report only represents those incidents that have been reported to and investigated by ATF. 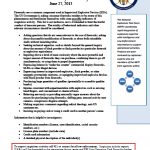 Fireworks are a common component used in Improvised Explosive Devices (IEDs). The US Government is asking consumer fireworks retailers to be aware of this phenomenon and familiarize themselves with some possible indicators of suspicious activity. This list is not inclusive, nor is it intended to limit the lawful conduct of innocent persons. The totality of behavioral indicators and other relevant circumstances should be considered.

An assessment from the U.S. Bomb Data Center describes how criminal bombers have “exploited their victims’ sense of greed or general curiosity by hiding improvised explosive devices (IEDs) inside common everyday items and leaving them as discarded merchandise to be found by the victim.” Written in late May following a string of flashlight bombings in Arizona, the assessment highlights a historical trend used by criminal bombers to lure unsuspecting victims by placing bombs in everything from electric razors to abandoned tackle boxes.

Some criminal bombers exploited their victims’ sense of greed or general curiosity by hiding improvised explosive devices (IEDs) inside common everyday items and leaving them as discarded merchandise to be found by the victim. Victims then perceived these situations as an unexpected opportunity to obtain an object of value with no associated cost. The devices utilized victim-operated switches rather than command or time switches. While a seemingly discarded working tool or item could be considered an enticement in itself, the lack of a written note or similar enticement distinguished these bombing incidents from other IEDs that utilized written messages to bait the victim. Recent bombing incidents in Phoenix and Glendale, Arizona, might be another example of this tactic.

An unnamed representative of the Bureau of Alcohol Tobacco Firearms and Explosives has requested the removal of a document from this website. The document in question was published more than 2 years ago in January 2010 when this website was less than six months old. The document is effectively one page in length, with a cover and an information page listing a phone number and contact information. The one page of content in the document describes an incident in September 2008 when a quantity of “Magnum Ultra” explosive detonator material from a supply store in Concord, North Carolina.

Bureau of Alcohol, Tobacco, Firearms and Explosives Commerce in Explosives: List of Explosive Materials published in the Federal Register October 19, 2011.

Emails and documents related to the ongoing investigation of the Bureau of Alcohol, Tobacco, Firearms and Explosives’ “Fast and Furious”/Project Gun Runner program leaked to CBS. Includes a map of distribution routes for weapons involved in the program leading to locations throughout Mexico.

In January 2009, the ATF Office of Strategic Intelligence and Information (OSII) disseminated the Outlaw Motorcycle Gangs (OMGs) and the Military report to numerous local, State, Federal, and military law enforcement agencies, as well as several foreign law enforcement agencies experiencing similar problems. Enclosed in the report were maps and charts depicting active duty, prior service, and/or retired military personnel who were current members of a documented 1% OMG (these are OMGs that are accepted by law enforcement to be specifically engaged in criminal activity). ATF OSII also reported on current 1% OMG members who were employed on military compounds, bases, instillations, and Federal buildings in the United States and abroad.

According to information obtained via the Southern Poverty Law Center (SPLC), the number of hate groups operating with the United States has risen and continues to rise. In 2006, law enforcement intelligence and SPLC information counted 844 organizations in 2007; this number has risen to 888, an increase of approximately 4.7 percent. This number may seem small; however, during an 8-year time period, this has translated into a 48-percent jump in the number of groups since 2000, when there were 602 hate groups operating in the United States, according to research by the intelligence project of the SPLC. Much of the expansion has been driven by hate groups’ exploitation of the issue of illegal immigration, which most Americans see as a pressing concern. This overview addresses the issue of American and Canadian extremism in Canada and in those States that fall along the American-Canadian border.

On October 23, 2008, ATF received notification of an explosives theft from B.R.S. Inc. B.R.S. advised that sometime between October 20th and October 23rd, unknown suspect(s) cut the locks to their Type II storage magazine and stole two cases of ORICA Magnum Ultra HW. The stolen explosives are described as being 2” by 16” sticks and were distributed among two cases. A full case weighs approximately 55 pounds. After an inventory reconciliation was conducted, it was determined that approximately 88 pounds of Magnum Ultra HW was stolen.