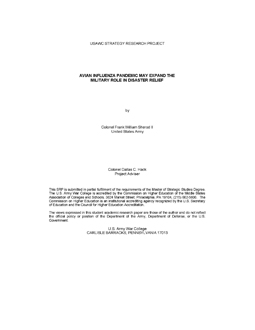 Recent involvement by the U.S. military with hurricane relief and comments by the President on expanding the DOD’s role in disaster relief indicates increased missions for an already stretched military. The next national disaster facing the U.S. could be an influenza pandemic. The bird flu virus H5N1 currently threatening Asia and Europe can potentially mutate into a deadly human influenza pandemic with global consequences. The last major flu pandemic in 1918 killed 50 million people worldwide and 600,000 in the U.S. alone. The United States is not prepared for a human pandemic and the military will have a significant role in any national response. While some departmental level planning has been accomplished recently, interdepartmental coordination and clear identification of the lead federal agency is still lacking. This project explains possible effects of a pandemic on the U.S. and current responsibilities of federal departments involved in disaster relief. Analysis is presented on the evolving role the DOD plays should this event become reality and finally recommends preparations that should be accomplished to prepare the nation for this very real threat. An ad-hoc approach to a pandemic will have severe negative and far reaching affects on our nation and must be avoided.

The DOD can leverage tremendous assets in support of domestic disaster relief but is normally in a supporting role. Commitments vary widely depending on the nature of the disaster and the preparedness of the states involved. As an example the U.S. military had a large role in Hurricane Katrina relief operations. At its peak, approximately 72,000 service members assisted in this effort. Other assets included 346 helicopters, 76 fixed-wing aircraft, 21 ships, amphibious landing crafts, satellite imagery, construction support and mortuary teams. Thousands of Gulf coast residents were rescued and evacuated by military forces. Additionally, over 30 million meals ready-to-eat and 10,000 truckloads of ice and water were delivered to the region. Because the magnitude of the hurricane was so large and first responders at the local and state levels were overwhelmed, the federal response was even more critical. With the problems encountered between all levels of government and the various federal agencies involved, the President suggested the Department of Defense (DOD) may be required to take a leadership role in disaster relief operations.

DOD has an improved structure for supporting disaster relief with an Assistant Secretary for Homeland Defense who is the department’s POC for support to civil authorities, emergency preparedness, and domestic crisis management.39 Northern Command (NORTHCOM), the newest unified command in the DOD, was created in 2002 to focus on defense of the homeland and civil support. NORTHCOM does not have forces permanently assigned, but as a combatant command receives forces to accomplish missions that are assigned by the Secretary of Defense. The Assistant Secretary of Defense for Health Affairs (ASD/HA) also has a leading role within DOD during pandemic planning and response.

Missions DOD will be required to execute in the event of pandemic are far reaching. Previous DoD guidance on pandemic planning focused on Force Health Protection (FHP). Updated guidance from ASD/HA expands planning direction to include Defense Support to Civil Authorities (DSCA) and support to Humanitarian Assistance and Disaster Relief (HA/DR) operations.41 A recent Chairman of the Joint Chiefs of Staff (CJCS) Planning Order directed combatant commands to conduct execution level planning for DOD’s response to a pandemic. Potential missions the combatant commanders were directed to include in planning are:

DOD recently began maintaining its own stockpile of antiviral drugs and vaccine to support military requirements in the event of a pandemic. Once complete, the stockpile will contain sufficient quantities of anti-viral treatments to treat priority requirements until a pandemic vaccine is available to military forces.

Expanding the role of federal military forces will have second and third order effects that must be weighed carefully. The impact of stretching the force by committing more manpower to disaster support during a time of war, legal implications for the force, increased budget costs, and the impact on public perception of the military must all be considered.

The ramifications of any new mission for the U.S. military in support of disaster relief within the borders of the United States requires close study based on the 1878 congressional act commonly referred to as “Posse Comitatus”. The Latin term posse comitatus translated means “the power of the county” and in this context, relates to the power of a local county sheriff to form a posse of armed men to expand the size and capability of local law enforcement officials to assist with the enforcement of laws. During civil war reconstruction, the U.S. Army stationed in the southern states was commonly used to enforce reconstruction policy and local laws. The act was initially passed as reconstruction ended, to prevent the common practice of the Army being used to conduct domestic law enforcement.

Because Posse Comitatus is a legislative act and not a constitutional amendment its principle of preventing the federal military from being used for law enforcement actions can be undermined by subsequent laws passed by Congress. In the first half of the 20th century federal troops were used to end the Chicago riots of 1919 and the Truman administration ended a railroad workers strike when he temporarily nationalized the railroads and placed them under the control of the Corps of Engineers. The 1947 National Security Act that created the Department of Defense contains an updated and reinforced reference to Posse Comitatus
limiting the role of the armed forces in law enforcement.  The examples of exceptions to the principle of the act are numerous and varied in scope. The Air Force and Navy have been used in the war on drugs, immigration control, and tariff enforcement to interdict smugglers beyond U.S. borders. Federal forces have been used to quell civil disturbances when requested by a state governor or when a state is unable to protect civil rights and/or property. When the President declares a major natural disaster he may use military forces and support on an emergency basis to preserve life and property such as Hurricane Andrew relief operations in Florida. Several exceptions have been granted to support the war on terror. After approval of the President, The Secretary of Defense can use federal forces, in the event of a terrorist attack involving weapons of mass destruction, nuclear material, or chemical and biological weapons. The President may also use federal forces in the execution of his duties to maintain transportation, education, commerce and civil rights. These exceptions are not part of U.S. Code but are broadly addressed as executive powers in Article II of the U.S. Constitution. Examples of these exemptions include using federal troops for desegregation of southern schools in the 1960’s and use of over 10,000 troops to provide security for the 1996 Olympics in Atlanta. These examples are not all inclusive but clearly show there have been significant exceptions made to the original intent of the Posse Comitatus Act.

The trend in use of federal military for domestic purposes has risen significantly over the last thirty years. This use has led to more conflicts with the Posse Comitatus statues as written and more exemptions being made by the legislative and executive branches. The debate over this use of federal forces has almost entirely been in the academic arena. There has been no public or political outcry of misuse of the military. In most cases where there has been public attention it has been focused on the impediments to allowing more force to be used in relief operations. It must be stated however, that a large majority of federal military support to civil authorities has been relief operations where the military is viewed as a savior and not to law enforcement operations where the federal military could be viewed as an enforcer with negative implications for DOD.

With the use of executive authority over the military and the exemptions to Posse Comitatus enacted by Congress, there is an apparent shift of power from the legislative to executive branch during times of crisis. This could create potential political hurdles for the President in pushing for the Department of Defense to take a leading role in disaster relief operations. It may be viewed as an attempt to consolidate more power in the executive branch of government and Congress may be unwilling to further modify Posse Comitatus. During a pandemic, the military will likely perform many roles including some law enforcement missions. Clear definition of what actions are authorized by the military to support the federal response is crucial.

The Posse Comitatus Act will not prevent the military from participating or even playing an expanded role in disaster relief. However, for clarity and unity of command the code should be rewritten so there is no doubt about the role of the Department of Defense, its federal forces and reserve forces before the next disaster hits. There should be a clear legislative and executive definition of what limits will be imposed on the use of military forces for domestic law enforcement. The military role should be limited and more precisely defined. Clarity of the law in fast moving disaster relief operations is critical.