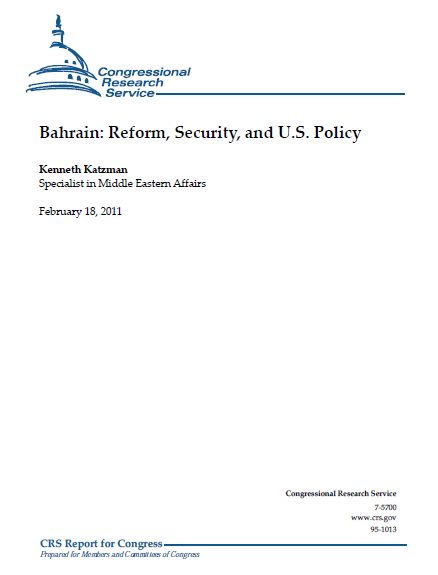 After experiencing serious unrest during the late 1990s, Bahrain undertook several steps to enhance the inclusion of the Shiite majority in governance. However, protests erupting following the uprising that overthrew Egyptian President Hosni Mubarak on February 11, 2011, demonstrate that Shiite grievances over the distribution of power and economic opportunities remain unsatisfied. The new unrest comes four months after smaller protests against the efforts by the Sunni-led government’s efforts to maintain its tight grip on power in the October 23, 2010, parliamentary election. That election, no matter the outcome, would not have unseated the ruling Al Khalifa family from power, but the Shiite population was hoping that winning a majority in the elected lower house could give it greater authority with which to challenge the ruling family. In advance of the elections, the government launched a wave of arrests intended to try to discredit some of the hard-line Shiite leadership as tools of Iran. The main Shiite faction, an Islamist group called “Wifaq” (Accord), won one more seat than it did in the 2006 election but still ended up short of a majority (18 out of the 40 seats) in the elected lower house.

Underlying the unrest are Bahraini leadership concerns that Iran is supporting Shiite opposition
movements, possibly in an effort to install a Shiite led, pro-Iranian government on the island.
These fears are occasionally reinforced by comments from Iranian editorialists and political
leaders that Bahrain should never have become formally independent of Iran. On the other hand,
Bahrain’s Shiite oppositionists accuse the government of inflating the Iran threat, and the contacts
between Iran and the opposition, to discredit the opposition politically. Bahrain’s rulers have tried
to avoid inviting Iranian aggression, in part by signing energy agreements with Iran and by
allowing Iranian banks and businesses to operate there.

The 2011 unrest, which was met by a violent government crackdown on February 17, 2011,
directly affects U.S. national security interests. Bahrain, in exchange for a tacit U.S. security
guarantee, has provided key support for U.S. interests by hosting U.S. naval headquarters for the
Gulf for over 60 years and by providing facilities and small numbers of personnel for U.S. war
efforts in Iraq and Afghanistan. Bahraini facilities have been pivotal to U.S. strategy to deter any
Iranian aggression as well as to interdict the movement of terrorists and weapons-related
technology on Gulf waterways. The United States has designated Bahrain as a “major non-NATO
ally,” and it provides small amounts of security assistance to Bahrain. On other regional issues
such as the Arab-Israeli dispute, Bahrain has tended to defer to Saudi Arabia or other powers to
take the lead in formulating proposals or representing the position of the Persian Gulf states,
collectively. These areas of strong U.S.-Bahrain cooperation have led to public criticism of
successive U.S. Administrations, including by some in Congress, for muting criticism of
Bahrain’s treatment of its Shiite majority in the interests of ensuring Bahrain’s cooperation on
security issues. Amid concerns that a rise to power of the Shiite opposition could jeopardize the
U.S. military cooperation with Bahrain, the Obama Administration has criticized the use of
violence by the government in the February 2011 unrest but has stopped well short of siding with
the mostly Shiite demonstrators there.

Fueling Shiite unrest is the fact that Bahrain is generally poorer than most of the other Persian
Gulf monarchies, in large part because Bahrain has largely run out of crude oil reserves. It has
tried to compensate through diversification, particularly in the banking sector and some
manufacturing. In September 2004, the United States and Bahrain signed a free trade agreement
(FTA); legislation implementing it was signed January 11, 2006 (P.L. 109-169).