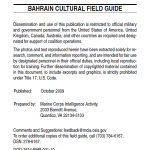 The Bahrain Cultural Field Guide is designed to provide deploying military personnel an overview of Bahrain’s cultural terrain. In this field guide, Bahrain’s cultural history has been synopsized to capture the more significant aspects of the country’s cultural environment, with emphasis on factors having the greatest potential to impact operations. 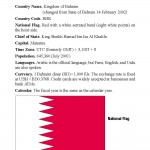 This handbook provides basic reference information on Bahrain, including its geography, history, government, military forces, and communications and transportation networks. This information is intended to familiarize military personnel with local customs and area knowledge to assist them during their assignment to Bahrain.

The following photos were taken in late March and early April 2012.

After experiencing serious unrest during the late 1990s, Bahrain undertook several steps to enhance the inclusion of the Shiite majority in governance. However, protests erupting following the uprising that overthrew Egyptian President Hosni Mubarak on February 11, 2011, demonstrate that Shiite grievances over the distribution of power and economic opportunities remain unsatisfied. The new unrest comes four months after smaller protests against the efforts by the Sunni-led government’s efforts to maintain its tight grip on power in the October 23, 2010, parliamentary election. That election, no matter the outcome, would not have unseated the ruling Al Khalifa family from power, but the Shiite population was hoping that winning a majority in the elected lower house could give it greater authority with which to challenge the ruling family. In advance of the elections, the government launched a wave of arrests intended to try to discredit
some of the hard-line Shiite leadership as tools of Iran.

The following photos are from Salmaniya Hospital, Thursday 17 February 2011 following protests in Pearl Square in Manama, Bahrain. The photos were taken by the Islamic Human Rights Commission and some of them are extremely graphic.