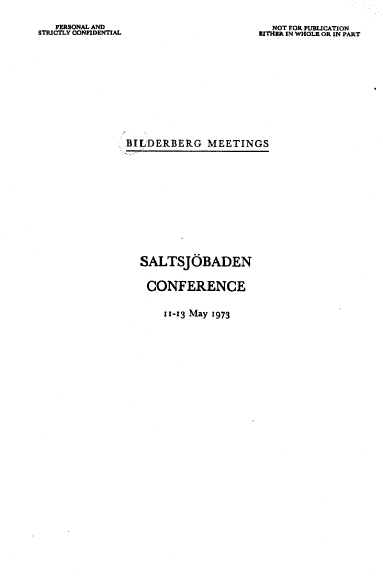 The twenty-second Bilderberg Meeting was held at the Grand Hotel Saltsjobaden in Saltsjobaden, Sweden, on 11, 12 and 13 May 1973 under the chairmanship of H.R.H. The Prince of the Netherlands.

In accordance with the rules adopted at each Meeting, all participants spoke in a purely personal capacity without in any way committing whatever government or organization to which they might belong. To enable participants to speak with the greatest possible frankness, the discussions were confidential with no reporters being admitted.

I. The Possibilities of the Development of a European Energy Policy, and the Consequences for European-North American Relations.

At the opening of the meeting, H.R.H. The Prince of the Netherlands read a telegram of thanks and good wishes which he had sent to H.M. Gustav VI Adolf and the reply which he had received from the latter.

His Royal Highness expressed his regret at the absence of Professor John Pesmazoglou, whose request for permission to leave Greece had been denied, and of Mr. Gerhard Schroder of West Germany, whose political commitments had prevented him at the last moment from attending.

After recalling the Bilderberg rules of procedure, The Prince turned to the first item of the Agenda.