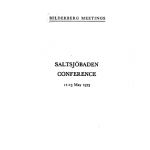 A copy of the conference report for the 1973 Bilderberg Conference held at the Grand Hotel Saltsjöbaden in Saltsjöbaden, Sweden. 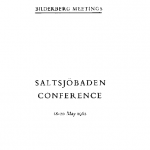 A copy of the conference report for the 1962 Bilderberg Conference held in the Grand Hotel Saltsjöbaden in Saltsjöbaden, Sweden.

On 2 December 2010 the Swedish Prosecution Authority (“the Prosecutor”), who is the respondent to this appeal, issued a European Arrest Warrant (“EAW”) signed by Marianne Ny, a prosecutor, requesting the arrest and surrender of Mr Assange, the appellant. Mr Assange was, at the time, in England, as he still is. The offences of which he is accused and in respect of which his surrender is sought are alleged to have been committed in Stockholm against two women in August 2010. They include “sexual molestation” and, in one case, rape. At the extradition hearing before the Senior District Judge, and subsequently on appeal to the Divisional Court, he unsuccessfully challenged the validity of the EAW on a number of grounds. This appeal relates to only one of these. Section 2(2) in Part 1 of the Extradition Act 2003 (“the 2003 Act”) requires an EAW to be issued by a “judicial authority”. Mr Assange contends that the Prosecutor does not fall within the meaning of that phrase and that, accordingly, the EAW is invalid. This point of law is of general importance, for in the case of quite a number of Member States EAWs are issued by public prosecutors. Its resolution does not turn on the facts of Mr Assange’s case. I shall, accordingly, say no more about them at this stage, although I shall revert briefly to them towards the end of this judgment.

Decision by the Queen’s Bench Division of the UK High Court of Justice in the matter of Assange v Swedish Prosecution Authority issued November 2, 2011.