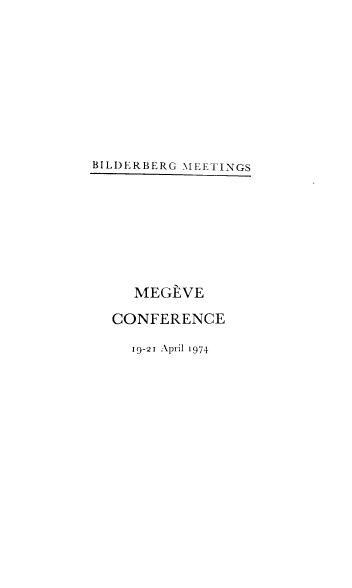 The twenty-third Bilderberg Meeting was held at the Hotel Mont d’Arbois, Megéve, France, on 19, 20 and 21 April 1974 under the Chairmanship of H.R.H. The Prince of the Netherlands.

There were 87 participants, drawn from a variety of fields: government and politics, universities, journalism, diplomacy, industry, transport, the law, banking, foundation administration and military service. They came from fourteen Western European countries, the United States, Canada and various international organizations.

In accordance with the rules adopted at each Meeting, all participants spoke in a purely personal capacity without in any way committing whatever government or organization to which they might belong. To enable participants to speak frankly, the discussions were confidential, with no press reporters admitted.

The Agenda was as follows :
‘Prospects for the Atlantic World.’

In opening the meeting, H.R.H. The Prince Of the Netherlands invited all the participants to stand for a moment Of silent tribute to the memory Of the late President Pompidou. He then read a telegram which he had sent to President Poher, expressing sympathy to the French nation at the loss of Monsieur Pompidou, who himself had been a Bilderberg participant. (President Poher’s telegram of response was read later in the meeting.)

The Prince reported that Secretary Kissinger had written to convey his great disappointment at having been prevented by his official duties from attending the meeting.

His Royal Highness gave a special welcome to Professor John Pesmazoglu, Who had been unable to attend six previous meetings by reason of the refusal Of the Greek government to issue him a passport. Professor Pesmazoglu replied that his presence was a sort of accident, and should not be taken as a sign of change in his country. His thoughts went out to his compatriots under arrest and threatened with deportation. The Greek people were committed to continue their struggle for constitutional rights and liberties.

After recalling the rules Of procedure, the Prince turned to the subject Of the
agenda.