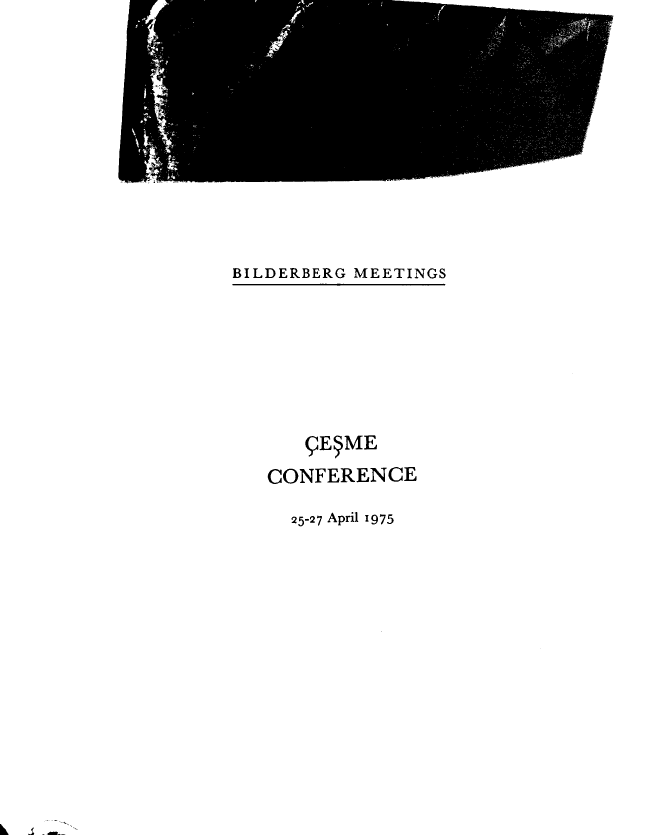 The twenty-fourth Bilderberg Meeting was held at the Golden Dolphin Hotel, Çeşme, Turkey, on 25, 26 and 27 April, 1975, under the Chairmanship of H.R.H. The Prince of the Netherlands.

There were 99 participants, who came from 14 European countries, the United States, Canada and several international organizations. A wide variety of fields was represented: government and politics, banking, education, the law, journalism, industrial management and trade unions, transport, foundation administration, and the diplomatic service.

In accordance with the rules adopted at each Meeting, all participants spoke in a purely personal capacity without in any way committing the organization or government to which they belonged. To enable participants to speak frankly, the discussions were confidential, with no press reporters admitted.

I. Inflation: Its Economic, Social and Political Implications.

A. The present status and prospects of efforts to resolve the Arab-Israeli
conflict, and the effect on relations among NATO members.

B. Other recent developments affecting the relations among NATO
countries.

In opening the meeting, H.R.H. The Prince of the Netherlands read the text of a telegram which he had sent to the President of Turkey, expressing gratitude for that country’s hospitable welcome. (A message of good wishes from President Koruturk was read to the participants at a subsequent session.) The Prince also read a telegram of greetings recieved from the Turkish Prime Minister, Mr. Demirel.

After recalling the rules of procedure, the Prince turned to the first item on the Agenda.