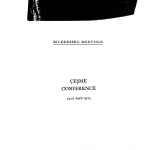 A copy of the conference report for the 1975 Bilderberg Conference held at the Golden Dolphin Resort Hotel in Çeşme, Turkey. 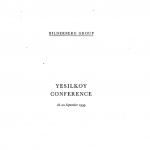 A copy of the conference report for the 1959 Bilderberg Conference held in the Çinar Hotel in Yesilkoy, Turkey.

In terms of enforcement of competition rules, the number of decisions taken increased in 2008 compared to the previous year. While the number of merger and exemption cases increased significantly, the number of cases in the area of competition infringements (cartels, vertical restraints and abusive practices) decreased. The increasing number of exemption applications is quite striking in 2008. The main explanation for this increase comes from the introduction of 40% market share threshold in the Block Exemption Communiqué on Vertical Agreements. The agreements previously exempted lost their exempted status after the introduction of the threshold.

In parallel with the preparations of the report and the recommendation requested by the European Council, the Commission services have conducted an assessment of the effects of Turkey’s possible accession on the Union and its policies.

One of the entries indicates nuclear secrets black market, and it says,”Edmonds alleges that in the course of her work for the government she found evidence that the FBI, State Department and Pentagon had been infiltrated by a Turkish and Israeli run intelligence network that paid high ranking American officials to steal nuclear weapons secrets,” and they have some footnotes for that, some cites. Is that correct that you’ve made those allegations?