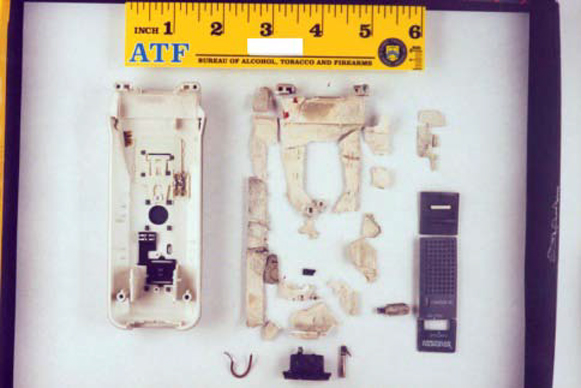 An ATF evidence photo shows the remnants of an American Tourister electric razor used to conceal an explosive device.

A recent assessment from the U.S. Bomb Data Center describes how criminal bombers have “exploited their victims’ sense of greed or general curiosity by hiding improvised explosive devices (IEDs) inside common everyday items and leaving them as discarded merchandise to be found by the victim.”  Written in late May following a string of flashlight bombings in Arizona, the assessment highlights a historical trend used by criminal bombers to lure unsuspecting victims by placing bombs in everything from electric razors to abandoned tackle boxes.

In one 2002 incident described in the assessment, a man named Hosea Crumpler found an American Tourister Range 2000 electric razor in the men’s bathroom at a McDonald’s in Brunswick, New York.  Crumpler took the razor home with him, plugged it in and attempted to use the device triggering a bomb that caused damage to his hands, chest, face, and eyes.  Crumpler’s wife also sustained an injury from shrapnel.  Another incident the same year similarly involved a razor containing an explosive device that was purchased from a discount bin at a Price Chopper Supermarket in Bennington, Vermont.  Store employees said the razor had been found with other returned items.

Multiple incidents that occurred in 1994 and 1995 involved the construction of explosive drills that were left in the yards of targeted victims.  Both of the devices were manufactured by Paul Raymond Farris who used one to bomb his ex-wife’s son-in-law and another to attack someone his friend suspected of “selling his welding equipment without permission.”  In 1998, two more incidents occurred in Louisa County, Virginia that involved explosive devices hidden in a green tackle box left at the end of a driveway and a flashlight left in a Pizza Hut parking lot.

In every one of these cases, the explosive device inflicted severe injuries on the victim despite its relatively crude construction. The incidents are noteworthy, according to the assessment’s author, because they depend “solely on the victim’s curiosity or greed for the item instead of a note, gift wrapping or some other enticement.”

Earlier this year, three plastic flashlights were discovered in Glendale and Phoenix, Arizona that contained explosive devices.  Two were discovered in the landscaping of local businesses and one was discovered by an employee of a Salvation Army facility while sorting through donations.  Each of the devices was triggered when the victims attempted to turn the flashlight on, resulting in minor injuries to five people.  However, little information is available on these attacks in order to “avoid compromising the criminal investigation.”