This script produced by the military for the Article 32 hearing of PFC Bradley Manning was released as part of a public court filing and was first reported on by Politico. 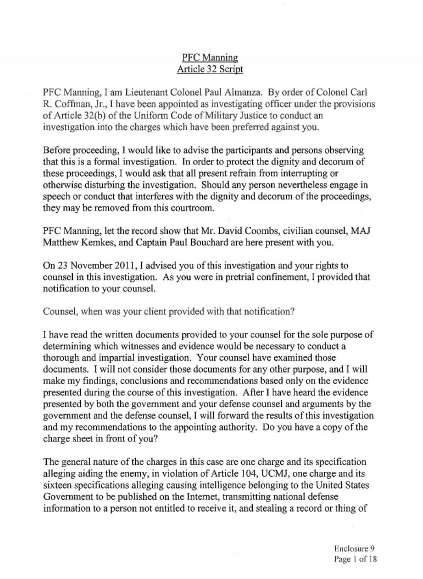 PFC Manning, I am Lieutenant Colonel Paul Almanza. By order of Colonel Carl R. Coffinan, Jr., I have been appointed as investigating officer under the provisions of Article 32(b) of the Uniform Code of Military Justice to conduct an investigation into the charges which have been preferred against you.

Before proceeding, I would like to advise the participants and persons observing that this is a formal investigation. In order to protect the dignity and decorum of these proceedings, I would ask that all present refrain from interrupting or otherwise disturbing the investigation. Should any person nevertheless engage in speech or conduct that interferes with the dignity and decorum of the proceedings, they may be removed from this courtroom.

PFC Manning, let the record show that Mr. David Coombs, civilian counsel, MAJ Matthew Kemkes, and Captain Paul Bouchard are here present with you. On 23 November 2011, I advised you of this investigation and your rights to counsel in this investigation. As you were in pretrial confinement, I provided that notification to your counsel.

Counsel, when was your client provided with that notification?

I have read the written documents provided to your counsel for the sole purpose of determining which witnesses and evidence would be necessary to conduct a thorough and impartial investigation. Your counsel have examined those documents. I will not consider those documents for any other purpose, and I will make my findings, conclusions and recommendations based only on the evidence presented during the course of this investigation. After I have heard the evidence presented by both the government and your defense counsel and arguments by the government and the defense counsel, I will forward the results of this investigation and my recommendations to the appointing authority. Do you have a copy of the charge sheet in front of you? 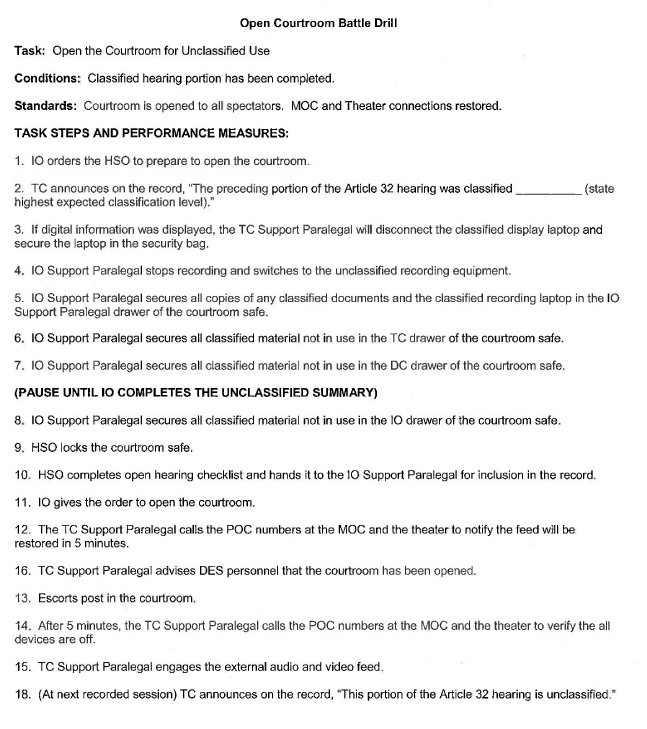