Canadian Forces Guidance for the Conduct of Domestic Operations

The following is the text of National Defence Headquarters (NDHQ) Instruction DCDS 2/98 issued July 10, 1998.  The instruction is considered to be the Canadian “domestic operations bible” according to a 2004 paper from the U.S. Army School of Advanced Military Studies. 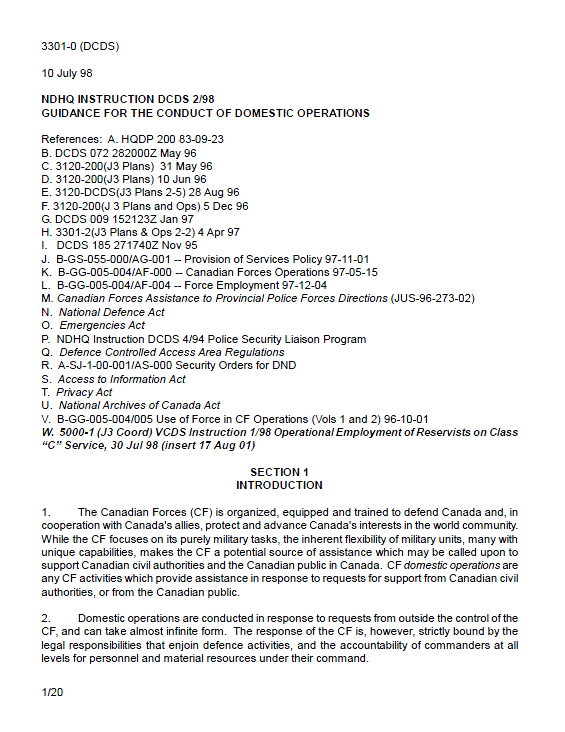 1. The Canadian Forces (CF) is organized, equipped and trained to defend Canada and, in cooperation with Canada’s allies, protect and advance Canada’s interests in the world community. While the CF focuses on its purely military tasks, the inherent flexibility of military units, many with unique capabilities, makes the CF a potential source of assistance which may be called upon to support Canadian civil authorities and the Canadian public in Canada. CF domestic operations are any CF activities which provide assistance in response to requests for support from Canadian civil authorities, or from the Canadian public.

2. Domestic operations are conducted in response to requests from outside the control of the CF, and can take almost infinite form. The response of the CF is, however, strictly bound by the legal responsibilities that enjoin defence activities, and the accountability of commanders at all levels for personnel and material resources under their command.

3. A simplified matrix of the potential scale of CF domestic operations and the necessary levels of approval is illustrated at Annex A. It is important to note that, while in the public eye there is often no clear definition between one type of assistance and another, for the CF there are very distinctive and strict jurisdictional and legal boundaries for different types of assistance, particularly those which may involve the use of force.

47. The CF does not have a standing mandate to enforce the laws of Canada. However, there are instances where municipal, provincial/territorial or federal law enforcement agencies may seek CF assistance in discharging their duties, and CF support to law enforcement operations may be authorized. Usually, the required assistance is for a unique or special skill or equipment that is only available from the CF.

48. The CF is also prepared to provide, under legislative or statutory arrangements with federal OGDs, resources to support the enforcement of federal laws, or the maintenance of public safety.
ASSISTANCE TO PROVINCIAL/TERRITORIAL LAW ENFORCEMENT AGENCIES

49. The federal government has approved an Order in Council (OIC) Canadian Forces Assistance to Provincial Police Forces Directions (ref M), and its associated Principles for Federal (Military) Assistance to Provincial Policing. Under ref M, provincial and territorial law enforcement agencies address requests for assistance to the federal Solicitor General. The Solicitor General will either satisfy these from the resources of the RCMP, or may request the MND authorize the CDS to provide CF assistance.

50. CF assistance, when provided, is always in a supporting role to the police force of jurisdiction, which retains full responsibility for enforcing the law.

53. The CF preference is that the approach and procedures outlined for assistance to provincial/territorial law enforcement authorities (ref M) be used as a model for responding to requests from federal OGDs. Therefore, while OGDs may direct their requests directly to the MND, the CF will encourage OGDs to initially refer their requests to the federal Solicitor General for assessment and response who, in turn, formally requests CF assistance. If the CF is requested to assist, and the MND authorizes CF assistance, then the CDS will determine the composition of any CF support, its mission, and the level of force authorized.

54. An outline of the arrangements currently in place with certain OGDs for specific support is included at Annex D.

76. Nothing in the foregoing should be construed to stand in the way of CF commanders collecting and maintaining open source information (i.e. media monitoring, press releases, government documents, open-source research and geographic materials, etc) for CF education and situational awareness, unrelated to planning and active operations, in open and unclassified files, or the briefing of commanders and staffs on current events. However, when situations arise where CF involvement is possible, commanders must take care to provide explicit direction and closely supervise information gathering to ensure that limitations on CF intelligence production are observed.

77. The Canadian Forces National Investigative Service (CFNIS), commanded by the Canadian Forces Provost Marshall(CFPM), and the CFNCIU, under NDHQ/J2, are the only agencies authorized to liaise with civil law enforcement agencies and other civilian authorities through the Police Liaison Security Programme (PLSP) (ref P) for police intelligence. In accordance with ref P, the CFNIS and CFNCIU shall only report on intelligence items with a direct DND/CF nexus, which is defined as any situation or event:

a. that threatens DND/CF property or personnel;

b. involving DND/CF personnel; and/or

c. where a civil law enforcement agency has requested DND/CF assistance, or has indicated such a request is imminent. 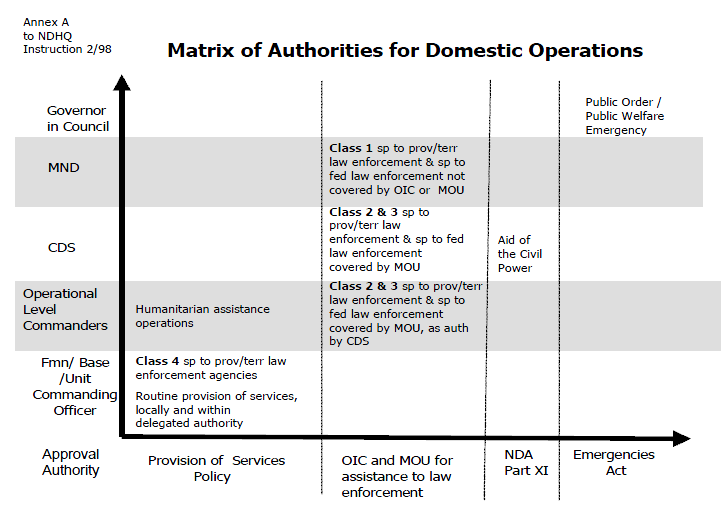