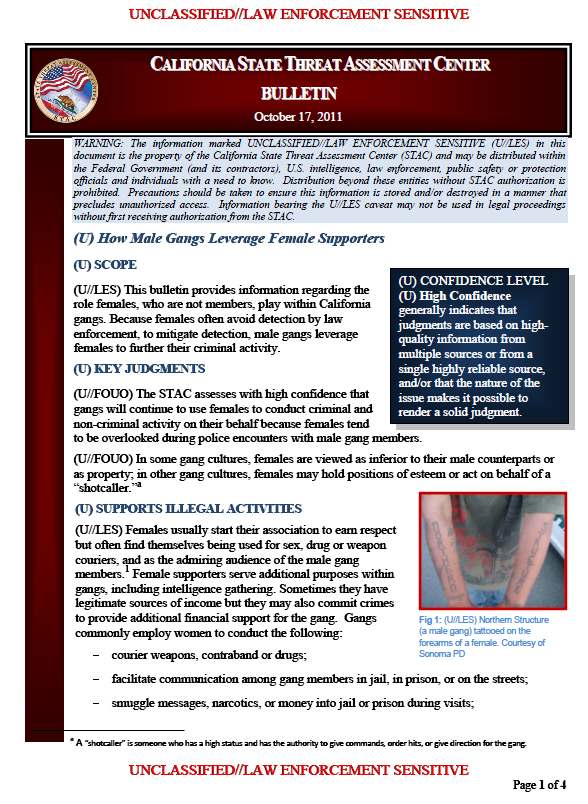 (U//LES) This bulletin provides information regarding the role females, who are not members, play within California gangs. Because females often avoid detection by law enforcement, to mitigate detection, male gangs leverage females to further their criminal activity.

(U//FOUO) The STAC assesses with high confidence that gangs will continue to use females to conduct criminal and non-criminal activity on their behalf because females tend to be overlooked during police encounters with male gang members.

(U//LES) Females usually start their association to earn respect but often find themselves being used for sex, drug or weapon couriers, and as the admiring audience of the male gang members.1 Female supporters serve additional purposes within gangs, including intelligence gathering. Sometimes they have legitimate sources of income but they may also commit crimes to provide additional financial support for the gang. Gangs commonly employ women to conduct the following:

As a communications facilitator, females may use their address or a Post Office Box as a central mailing destination where mail then gets repackaged and rerouted to other male gang members. They may also redraft letters on behalf of one gang member and send it to another.

(U) A FEMALE’S ROLE IN DIFFERENT GANG CULTURES

(U//LES) Predominantly Hispanic gangs often give their females, wives, or girlfriends much more latitude than other gangs. Women are typically given the power to run things on behalf of their “man.” They might be used in lieu of the actual shotcaller. The wife of a Mexican Mafia (EME) shotcaller is often referred to as “La Senora” – Mrs. or “La Madrina” – Godmother. A sister or biological daughter might also hold this title. While they are not involved in the commission of criminal acts, they can order gang members to commit the deed. An order given by “La Senora,” is considered equivalent to an order coming directly from the EME shotcaller; a soldier (gang member) cannot disobey her. The wife/girlfriend will often act as a liaison between street members and an incarcerated EME shotcaller to keep him apprised of what is happening on the streets. She also usually controls the gang‟s money (taxesb paid by gang members) and bank account(s).

(U//LES) Among skinhead gangs and outlaw motorcycle gangs (OMGs), women do not typically hold as much prestige as their counterparts associated with Hispanic gangs. OMG women are typically considered to be, referred to as and treated as property. A girlfriend may be shared among members; however, as a wife, she is no longer shared but earns the privilege of patching her riding gear with “Property of” her husband. Another term used by OMGs and skinhead gangs to refer to their girlfriends or wives is “old lady,” indicative of their perceived inferiority. OMGs also use their women to carry weapons or drugs.

(U//LES) In some instances, female skinhead supporters are more dedicated or “down for the cause” than male skinheads, but they are still considered to be disposable.. In one case, an Aryan Brotherhood gang member used a gun, which he borrowed from a female supporter, in the commission of a robbery. When the female confronted the gang member about his illegal use of her gun, he killed her.