The following document discusses civilian casualties related to coalition artillery ranges in Afghanistan.  According to the document, the value of exploded ordnance scrap metal and unexploded ordnance (UXO) collected from coalition artillery ranges motivates Afghans to send their children to collect the material after coalition training exercises.  Citing the Afghan government, the document states that in 2011 76% of casualties caused by mines and UXO (431 casualties) were children.  However, the document does not clarify what percentage of these casualties were the result of collection activities on coalition artillery ranges.  The document states that a 2012 NATO Lessons Learned Working Group discussing the issue found that “Afghan parents understand the risk and dangers of sending their children to collect metal fragments, from indirect fire ranges, and are willing to risk the safety of their children to exchange metal fragments for money.”  In 2009, three children were killed and a fourth injured in a bomb blast that locals said was caused by UXO left by Canadian forces after conducting artillery training.  The Canadian military acknowledged that they had been conducting artillery exercises in the area, but ultimately blamed the blast on the Taliban. 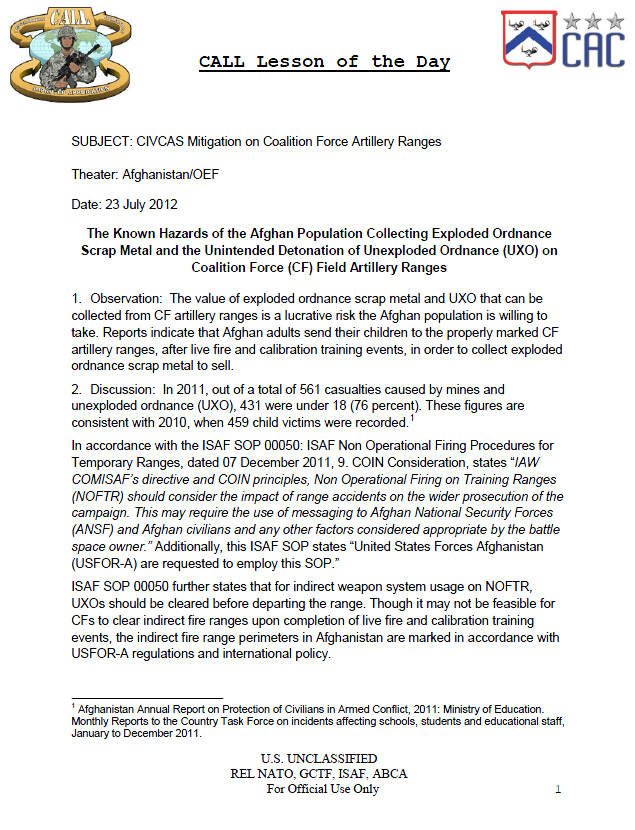 1. Observation: The value of exploded ordnance scrap metal and UXO that can be collected from CF artillery ranges is a lucrative risk the Afghan population is willing to take. Reports indicate that Afghan adults send their children to the properly marked CF artillery ranges, after live fire and calibration training events, in order to collect exploded ordnance scrap metal to sell.

In accordance with the ISAF SOP 00050: ISAF Non Operational Firing Procedures for Temporary Ranges, dated 07 December 2011, 9. COIN Consideration, states “IAW COMISAF’s directive and COIN principles, Non Operational Firing on Training Ranges (NOFTR) should consider the impact of range accidents on the wider prosecution of the campaign. This may require the use of messaging to Afghan National Security Forces (ANSF) and Afghan civilians and any other factors considered appropriate by the battle space owner.” Additionally, this ISAF SOP states “United States Forces Afghanistan (USFOR-A) are requested to employ this SOP.”

ISAF SOP 00050 further states that for indirect weapon system usage on NOFTR, UXOs should be cleared before departing the range. Though it may not be feasible for CFs to clear indirect fire ranges upon completion of live fire and calibration training events, the indirect fire range perimeters in Afghanistan are marked in accordance with USFOR-A regulations and international policy.

During the 18 July 2012 NATO Lessons Learned Working Group at HQ-ISAF, the occurrences of Afghan children injured or killed from UXO detonations while collecting ordnance fragments on CF artillery ranges was discussed. One discussion centered on ‘what is the Afghan solution to this problem?’ During the 18 July NATO Lessons Learned Working Group, it was discussed that Afghan parents understand the risk and dangers of sending their children to collect metal fragments, from indirect fire ranges, and are willing to risk the safety of their children to exchange metal fragments for money.

According to the International Guidelines for Landmine and Unexploded Ordnance Awareness Education, “the term ‘mine awareness’ is employed to refer to programs which, relying on information sharing, teaching and the identifying ways to avoid traversing mined areas, seek to shield populations from accidents involving landmines, unexploded ordnance (UXO), or other antipersonnel devices left behind by military conflicts. While humanitarian interventions aimed at protecting civilian populations through increased mine awareness have rapidly succeeded one another over the past decade, insufficient attention has been paid to the need to exchange information about the lessons learned through relevant practical experiences.”2

3. Lessons Learned: (1) Though not every Afghan can read, they understand minefield and UXO markings surrounding the CF artillery ranges, and the danger associated with these areas. (2) Robot technology is commercially available for surface and subsurface range clearing. One company in particular, Integration Innovation, Inc. (i3) headquartered in Huntsville, AL developed a remote-controlled robotic range clearing machine.

• ISAF Joint Command (IJC) should work with GIRoA, the Afghan Ministry of Interior (MoI), and the Afghan Ministry of Defense (MoD) to develop a CIVCAS mitigation information operation (IO) radio broadcast campaign, in Dari and Pashtu, throughout the Regional Commands to dissuade the Afghan population, specifically children, from collecting scrap metal and UXO on known CF field artillery ranges. This radio broadcast IO campaign should also include the dangers of collecting landmines and IEDs in areas not associated with CF artillery ranges.
• Fund Afghan TV broadcast of Defusing the Danger, a short animation public service announcement project developed by Mission Media and funded by the ISAF NATO Channel contract to raise UXO awareness. The purpose of this campaign is to raise awareness in both children and adults of the dangers posed by unexploded ordnance. Defusing the Danger should target the most popular Afghan TV channels, as well as social media and mobile phone networks. Books, pamphlets, and leaflets could also be produced for distribution in support of this IO campaign.
• ISAF should implement Rapid Equipment Fielded (REF) of commercially available range clearing remote-controlled robotic technology for clearing UXOs from CF field artillery ranges.