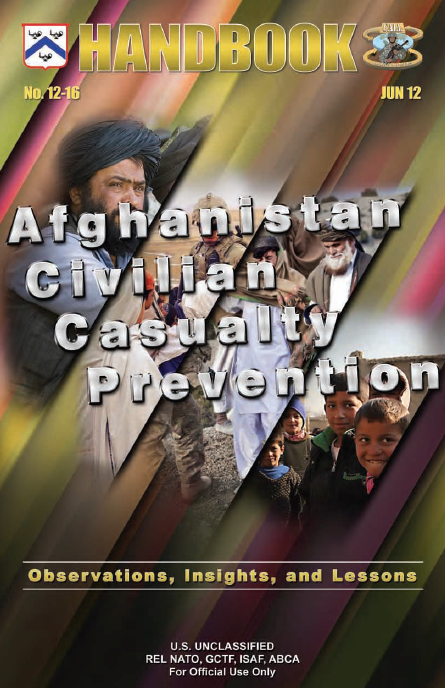 Because of these factors, CIVCAS became a key operational issue in Afghanistan beginning in 2005. Despite efforts to reduce civilian harm caused by coalition forces, initial initiatives in Afghanistan1 were not successful in mitigating the issue. Several high-profile CIVCAS events in 2008 and early 2009 highlighted the lack of progress in effectively addressing CIVCAS. The Bala Balouk CIVCAS incident in May 2009 resulted in increased emphasis and focus by the International Security Assistance Force (ISAF) leadership on the reduction of CIVCAS. Since mid-2009, ISAF leadership has consistently and strongly emphasized the importance of reducing CIVCAS, both by modifying procedures and policies and by urging tactical patience when feasible to aid discrimination. The COMISAF continues to stress to currently deployed forces the importance of minimizing CIVCAS, and recently emphasized to ISAF contributing nations how they must better prepare incoming forces to deal with the issue of CIVCAS.

The ISAF has made significant progress in reducing CIVCAS, with a 20 percent reduction in ISAF-caused CIVCAS in 2010 and 2011 compared to 2009. At the same time, CIVCAS reduction and mitigation is a strategic as well as a tactical issue. Single CIVCAS incidents continue to negatively impact the ISAF mission and curtail necessary freedom of action. Because of this, continued vigilance is required in reducing CIVCAS during ISAF operations.

LTG Scaparotti (former Commander, ISAF Joint Command) shared a number of overarching principles for reducing and mitigating CIVCAS in Afghanistan with ISAF tactical forces. These principles, based on lessons from hundreds of CIVCAS incidents, include:

This handbook describes the general principles listed above and provides concrete steps that Soldiers can include in their operations. In addition to avoiding CIVCAS, effective consequence management of CIVCAS is critical — the longest chapter of this handbook is devoted to this topic to provide a blueprint on how to respond when CIVCAS occurs. Importantly, these principles and steps are not meant to be burdensome, but rather are critical tools to enable success in the counterinsurgency mission in Afghanistan. The experience of prior ISAF soldiers has shown that efforts to reduce CIVCAS — and mitigate their effects when they occur — can be a win-win scenario, both reducing harm to civilians and maintaining mission effectiveness.

In cases where Soldiers have the opportunity to consider various options and ask the question “Should I shoot?,” they can consider tactical alternatives. For example, some forces had a procedure of calling in close air support (CAS) whenever they were in a troops-in-contact situation. But the tactical directive caused them to re-evaluate their use of air platforms as the default response, and they started using organic fires and maneuver as an option that was more discriminate. In general, forces considered three types of tactical alternatives:

Ground BDA is not always feasible due to ground force location and threat considerations. Where air platforms are involved or available, full-motion video from airborne platforms can be used as a surrogate for a ground BDA. Recorded video can be declassified, if necessary, and shared with Afghan leaders in key leader engagements (KLEs). However, video from air platforms does not always capture needed details on the ground — such as identifying CIVCAS inside buildings or under rubble — so this should be a last resort. On-the-ground BDA should always be the default option. If ISAF soldiers are not available to conduct a BDA, some forces have called on Afghan security forces to quickly conduct BDA for them.