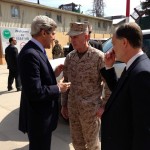 Public Intelligence has obtained the most recent version of the U.S. Civil-Military Strategic Framework for Afghanistan, the second revision of the document dated August 2013, detailing the U.S. government’s goals and priorities for rebuilding Afghan society. Issued by the U.S. Ambassador to Afghanistan James Cunningham and signed by the commander of U.S. forces Joseph Dunford, the framework covers U.S. priorities related to governance, the rule of law, socioeconomic development as well as the gradual transfer of authority to the Afghan government. When compared with a previous version of the framework from March 2012, also obtained by Public Intelligence, the document solidifies the prospect of long-term U.S. involvement in Afghanistan, removing optimistic statements about turnover dates and self-sustaining funding estimates and replacing them with measured assessments reinforcing the notion that U.S. and international forces will be present in Afghanistan far into the next decade. 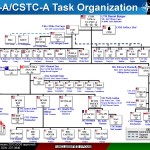 Organizational charts depicting the Government of the Islamic Republic of Afghanistan Ministries of Defense and Interior created by NATO Training Mission Afghanistan (NTM-A) and provided to coalition advisers to the Afghan government. 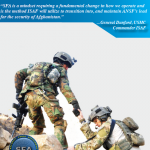 A September 2012 presentation from NATO’s International Security Assistance Force for training media spokespersons to work with Afghan and international media.

NATO/ISAF engagement in Afghanistan in 2010 was characterised by a refreshed, comprehensive civ-mil strategy as reflected in a substantial force uplift, significant progress in the growth and development of the Afghan National Security Forces, and discernable campaign progress in priority districts. These were reflected in the NATO/ISAF Strategic Communications Framework 2010. In parallel, political events, including the London Conference, the Consultative Peace Jirga, the Kabul Conference, Afghan Parliamentary elections and the NATO Summit in Lisbon, helped define a clear political roadmap for Afghanistan. These developments are reflected in the Lisbon Summit Declaration which provides political guidance for the focus of our efforts in 2011 and reaffirms that NATO’s mission in Afghanistan remains the Alliance’s key priority.

A presentation from the ISAF CJIATF-Shafafiyat on “Countering Corruption and Organized Crime to Make Afghanistan Stronger for Transition and a Good Future” dated March 2012.

According to FM 3-24, the population is the center of gravity for COIN operations. Afghanistan‘s population is roughly half female, half male, but in Afghanistan, the culture segregates by gender. As such, the appropriate operational response that is culturally sensitive to that segregation is to interact male to male & female to female. We want to understand 100% of the community by engaging them directly (Figure 1). By doing so, we get the insight that we need, while being respectful of the culture, yet building the fundamentally essential social contracts founded on trust and established in a cooperative environment. That social contract needs to be with the male and female population…both of whom are making decision about the future of this country, whether publicly or privately. ISAF forces are currently making decisions along all lines of operations that affect the entire population but with limited insight or perspective from the female half of the population.

The lawyer for the soldier accused of massacring seventeen people in a small Afghan village earlier this month has stated publicly that there is little or no evidence against his client. John Henry Browne, who is defending Staff Sergeant Robert Bales, told NBC that the U.S. government’s prosecution of Bales will be difficult as “They have no bodies, they have no autopsies, they have no forensics, they have no photographs, they have no witnesses. There is no Afghan who is going to come here to testify against this guy, so how do they prove premeditation? It’s going to be a problem for them.” In an interview with PBS, Browne reiterated this claim stating “There is no crime scene. There is no CSI stuff. There’s no DNA. There’s no fingerprints.” Browne has also stated that there is “no evidence about how many alleged victims” or “of where those remains are.”

For the National Security Prosecutor’s Unit (NSPU) or a provincial court to prosecute and convict detainees, including Afghan murder suspects or National Security criminals, capturing units must provide evidence and witness statements against the suspects for use in an Afghan court of law. Appropriate evidence collection may result in admissible evidence in support of effective prosecutions. Turn all evidence associated with the suspect over to Afghan authorities and obtain a thoroughly documented receipt for the evidence.

The level of partnership with ANSF units largely depends on the individual coalition commander’s discretion whether it is a partnered unit or an advisor team. Although this discretion is important to empower leaders on the ground, the current parameters in partnering guidance are very broad which leads to varying levels of effectiveness and consistency. Standardized guidelines would provide specific tasks (e.g. develop and conduct all planning and operations from a Joint TOC) to units designated as ANSF partners. Additionally, true embedded partnership improves ANSF development, mission accomplishment and force protection. The recommendations in this paper offer uniformed standards throughout diverse allied forces, assistance during RIP/TOA, improvement in the development of the Afghan forces, and a path to effective transition.

The Afghanistan Peace and Reintegration Programme (APRP) is active. It provides for both reintegration (where fighters leave the fight and peacefully rejoin their communities) and reconciliation (where entire insurgent groups reach a settlement with GIRoA that ends hostilities). Reintegration is the focus of this guide. Information is presented on the APRP, its place in the COIN Campaign and ISAF‟s role. It provides those in ISAF with what they need to work with community leaders and GIRoA and ANSF partners to build their understanding of the Programme and its opportunities. It is an Afghan Programme and ISAF‟s role is to assist and encourage GIRoA to implement it fully.

According to a series of classified reports from NATO and the UN recently published by this site, the recent elections in Afghanistan were marred by “unprecedented” levels of violence including voter intimidation, kidnapping of election workers and candidates, as well as attacks on polling stations and ballot distribution systems. A confidential United Nations “Joint Security Analysis” covering the week of the elections states that the country experienced a “massive increase” in violence “due to an unprecedented peak of security incidents recorded on Election Day 18 September.” In fact, there was such a significant and “unprecedented” increase in violence leading up to the elections that this created a significant decrease in subsequent attacks because insurgent forces were literally running out of ammunition.

(U//FOUO) BLUF: The People of FAQIR KHIEL and AFGHANYA villages are not allowing the Taliban to have a presence in their villages and have even used force to run a Taliban commander and his group out.

(U//FOUO) ATMOSPHERIC VALUE: Neutral; The Taliban has suffered heavy losses, including several commanders at the hands of Hezb-e-Islami. These losses have caused them to flee the UZBIN areas of the TAGAB District, KAPISA Province.

(U/ /FOUO) BLUF: If ISAF leaves there will be civil war, even AAF groups are fighting among each other. But the ANA needs assistance if they are going to defend Afghanistan. But the Americans give support to Pakistan even though they support the Taliban and AI Qaeda.