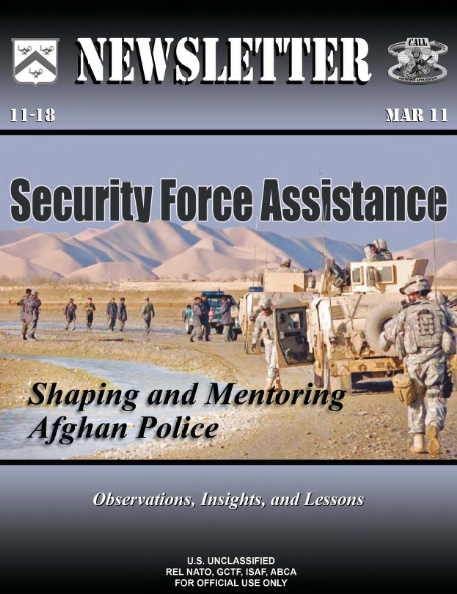 The following collection of articles focuses on security force assistance (SFA) and specifically on shaping and mentoring Afghanistan’s internal police and security forces. Afghanistan presents a unique challenge to U.S. Army forces in the geographical, cultural, economic, political, and security dimensions. Providing protection and security to a unique and diverse tribal population is an essential aspect of our counterinsurgency strategy. The proficiency, integrity, and loyalty of Afghan police forces are essential to accomplishing a secure environment and to sustaining success. The following articles cover a range of issues related to SFA and the training of Afghan national police and border police with the specific intent of establishing best practices and lessons learned. The collection should not be considered all-inclusive. This is an effort to capture relevant articles published in recent professional journals or maintained by the Center for Army Lessons Learned (CALL) and other joint archives to inform Soldiers about relevant observations, insights, and lessons and to provide a historical document for future reference.

In many instances, the ideas presented in these articles are personal opinion; in some cases, they are not limited to Army doctrine. The recommendations in these articles should always be validated with the latest approved Army and joint doctrine.

The recent shift in national concern from Iraq to Afghanistan and the increase in forces committed by the Obama administration have directed greater attention to the current problems in Afghanistan. United States forces and coalition partners are working on many fronts to secure a stable future for the country, but they face more than a few obstacles. At the macro level, the Afghan central government is weak and plagued by corruption and indifference to the plight of its rural constituency, yet without tribal accord, the government has no real chance of extending its reach to the rest of the country. The Afghan National Army, Police, and Border Police are increasing their numbers and improving their skills but, with the exception of a few exceptional Afghan National Army battalions, they are not yet capable of operating on their own. The poppy fields and drug trade in southern and eastern Afghanistan continue to flourish. The border with Pakistan remains porous enough for a resurgent Taliban to use it as its primary and most unfettered means of infiltration into remote rural sections of the country. These are just a few of the many problems for the government of Afghanistan and the U.S.-led coalition.

Many authors, strategists, and politicians have offered measured opinions and recommendations on how to improve the situation, but most agree that to fix these problems and allow Afghanistan to develop without the constant pressure of an insurgency, we must establish and maintain security and develop governance in the rural districts.

Completing these tasks may appear impossible to a casual observer of the conflict. Indeed, while fighting a growing insurgency, coalition casualties mount. Historically, the rural population in modern Afghanistan has rejected all large-scale reforms attempted by a central government. Unfortunately, change acceptable to the tribes will simply not come from the center. Establishing security in this war-torn land is achievable only if we focus our efforts and resources at the district level, where the sub-tribes are culturally dominant.

Nowhere in Afghanistan is this more pressing than along the border of Pakistan’s Federally Administered Tribal Areas (FATA). It is commonly accepted that the Taliban, Al-Qaeda, and other foreign fighters use the FATA as a safe haven from which to plan, resource, stage, and launch attacks in the border districts and deeper into Afghanistan’s interior. Since 2006, the number of foreign insurgents involved in the border fight has substantially increased, which strengthens the insurgency and decreases security. The struggle to secure this area has become the front line in the counterinsurgency fight and the coalition’s most important strategic task.

If we can establish security and stabilize the border provinces and districts in southern and eastern Afghanistan, the accompanying momentum may guide the rest of the country to a sustainable peace. The problem is that the insurgents are most effective in these rural areas, and limited troop levels make challenging them on a wider scale a confounding proposition.

The vision for effective local government administration in Afghanistan includes the district center as the point of initiation for all Afghan-led political, development, and security operations. The district center is already a local nerve center—it must also become the security epicenter. This is the first fundamental change to effect across the country. There are six important steps to take in every district in every province:

• Tribal elders within a district shura must elect a district governor they trust.

• A well-trained police chief must be appointed and he should have no less than 30 police officers to maintain order.

• District centers must be reinforced with coalition support and funds for governance and economic activity (with a designated development stipend to facilitate reconstruction programming).

• Each Afghan district must have no less than one company of the Afghan National Army garrisoned at the district center; their mission must be to conduct counterinsurgency operations and their primary task must be to engage daily with the population.

• A point security force must be emplaced (Afghan public protection force of 30 guards) in each district that reports directly to the district governor and guards the district center and other sites at risk of Taliban attack (i.e., girls’ schools, bazaars, etc.).

• A district-level and native Afghan National Directorate of Security chief must be assigned and, through appropriate coalition oversight, a robust informant network developed to counter Taliban human intelligence efforts and provide early warning.