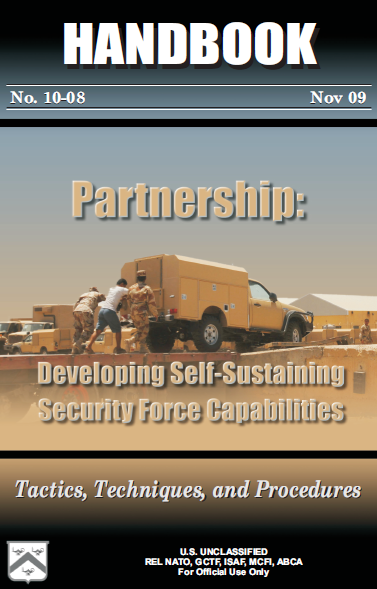 The Multi-National Corps–Iraq logistics staff and the Iraqi Security Forces (ISF) support operations cell, an element of the Iraqi Assistance Group, merged at the operational level to publish plans, policies, and procedures that met the strategic aims of the coalition forces, the national goals of the government of Iraq, and the joint campaign plan published by Multi-National Force–Iraq. Corps sustainment planners published operational objectives for execution at the operational and tactical levels in an effort to develop a sustainment-based system for the ISF. Based on experiences and observations over the past 18 months, the partners, advisors, and planners gathered the best practices for advising and assisting security forces at all levels of the sustainment system. This handbook presents partnering considerations in developing a fundamental base for a self-sustaining, host nation security force.

Although based largely on the experiences of units deployed in support of Operation Iraqi Freedom from 2007–2009, the sustainment development ideas and concepts presented in this book are worthy of consideration by any leader assigned the challenging task of developing host nation logistics. This publication is not just for logisticians. All leaders are charged to sustain the force, and many of the lessons learned over the past two years highlight gaps at the collective task/green-tab leader level. Many of the leaders in the Iraqi Army; Iraqi Police; National Police; Department of Border Security; Ministers of Defense, Interior, Transportation, Health, Oil; and many others, including coalition partners were themselves challenged by force sustainment and are critical elements to the solution.

• Commanders must avoid providing direct support to host nation security forces—if a system exists—and instead provide recommendations supporting the development of a host nation sustainment culture.
• Host nation logistics development requires organizations to assess processes outside their level of war to determine friction points.
• Leaders must recognize the importance of moving from initial assessment and continuing the planning process and plan implementation.
• Development of a process to synchronize efforts across all headquarters to gain unity of effort without unity of command is key to developing host nation systems.
• Systematic problems should be solved rather than symptomatic problems.
• Development of sustainment capabilities for local security forces is essential to establishing a viable local security structure.