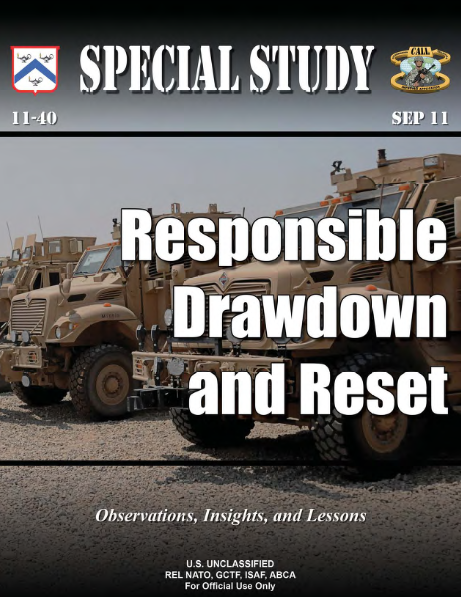 In 2008, in preparation for the eventual drawdown of United States military forces from Iraq, Army Materiel Command (AMC) began the search for lessons learned concerning the drawdown of forces that occurred after Operation Desert Storm. This search produced over ten thousand pages of documents that were fragmented in nature and contained no clear path to the end-state objectives of the current operational force. Thus, as Operation Iraqi Freedom (OIF) transitioned to Operation New Dawn (OND), the plan for the responsible drawdown of forces from Iraq had to be built from a new foundation, with no historical lessons learned to create an architecture in which planners could operate.

The purpose of this special study is to provide commanders, leaders, and planners at the tactical, operational, and strategic levels a guide that synchronizes strategic-level requirements and outcomes with operational- and tactical-level objectives, therefore providing synergy of effort that will support the Army Force Generation cycle and reset planning timelines. It is our hope that this information will be useful to both sustainment and maneuver commanders, that it will constitute a historical survey of recent drawdown operations, and that it will offer tactics, techniques, and procedures that can be used today and in the future to assist cornmanders at all levels with the planning and execution of the responsible drawdown of forces.

The responsible drawdown of forces (RDOF) process in Iraq remains one of the most complex undertakings by the U.S. Army in history. After nearly a decade in Iraq, the strategic relief in place/transfer of authority (RIP/TOA) between the Department of Defense (DOD) and the Department of State (DOS) requires all of the following events to occur within a seamless transition period: reduce U.S. and coalition forces, transition responsibility for security, assign key locations, and allocate necessary equipment to the DOS and/or the host nation. The RDOF process presents challenges at the tactical, operational, and strategic levels that are complex and multifaceted.

This special study has been written for the operational planner to discuss a wide range of strategic planning considerations during the RDOF process. The lessons captured in this document are largely derived from the Iraq perspective. These considerations will equally apply to a successful redeployment in Afghanistan or any other theater where a deliberate RDOF process will be undertaken with transition to another authority, whether it is government, host nation, or a coalition partner.