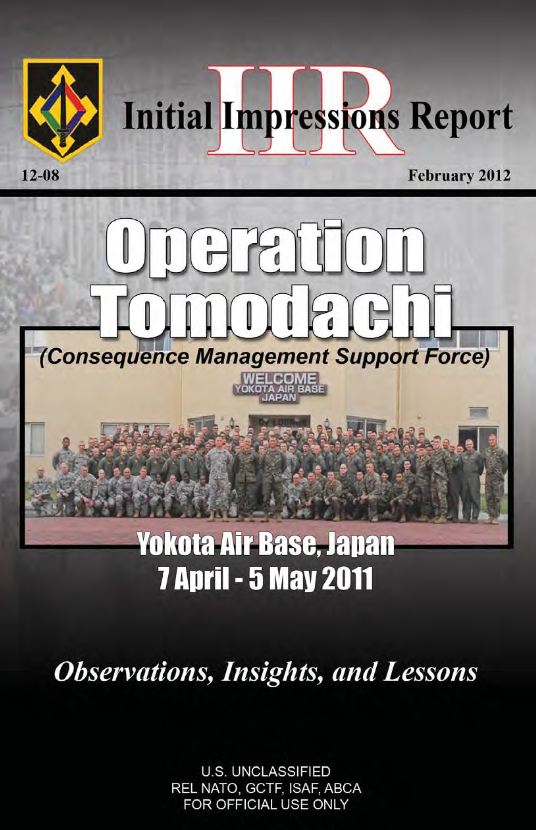 The U.S. Army, Pacific Command Chemical, Biological, Radiological, Nuclear, and High Yield Explosives Division and the 71st Chemical Company recently redeployed from Japan in support of Operation Tomodachi. Their efforts provide the center of gravity for this collection effort. This document will strive to highlight and capture some best practices and issues requiring further study by the U.S. Army Chemical, Biological, Radiological, and Nuclear School and other units deploying to similar operations.

The 71st Chemical Company, out of Schofield Barracks, HI, deployed two platoons to work jointly with the Airmen at Misawa and Yokota Air Bases, Japan. Their mission was to conduct radiological surveys and decontamination missions for contaminated aircraft, vehicles, and personnel entering the bases, which had been near areas suspected of having higher than normal radiation readings — namely, the 125-nautical mile radius around the Fukushima nuclear facility. Misawa Air Base is north of the reactor site and the surrounding area mostly undamaged by the tsunami and the massive earthquake. Areas south of Misawa were not as fortunate as the areas in the north.

Discussion: While response in this case was an FCM operation, this particular mission showed the agility and ability of the DOD to support a hazard at a nuclear power plant that resulted in a radiological release. Now that a response has become a reality, organizations such as the Nuclear Regulatory Commission and operators of nuclear power plants in the United States must ask a few questions for which civilian and military planners should collaborate. Some of those questions are: What units would respond? What equipment and training do the responding units have? What tasks would the DOD element perform, and for what would civilian authorities/power plant operators maintain responsibility? What role would unmanned ground and aerial systems play?

Organizations with a domestic CBRN CM mission exist. Failure to plan for their response to a domestic CBRN CM incident may slow the time required to respond with trained and ready forces. Planning needs to be done to address items such as:

•• Understanding what resources will be made available from each department of the United States.
•• Putting an effective exercise plan into effect that would serve to test the readiness of each responding organization while allowing leaders a chance to interact professionally with one another.
•• Training and equipping units for the CM mission (overseas CONUS units in Alaska and Hawaii).

•• The use of a cross-functional CM team, which brings together experts in various disciplines, enabled everyone to better understand conditions and coordinate response/management actions.
•• The DOD response to the Fukushima Daiichi power plant can be used as a case study in future leader development courses where CBRN CM (foreign and potentially domestic) is addressed.
•• Establish standards early for units of measurement for decontamination.
•• Use of unmanned aerial vehicles and UGVs with sensors and communication equipment can allow near real-time updates from the source and will help characterize the affected area.
•• Units being deployed to CM/FCM missions should review DSCA operations to get a better understanding of how the DOD supports the civil authorities prior to the deployment.