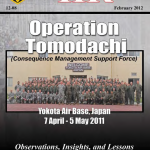 The U.S. Army, Pacific Command Chemical, Biological, Radiological, Nuclear, and High Yield Explosives Division and the 71st Chemical Company recently redeployed from Japan in support of Operation Tomodachi. Their efforts provide the center of gravity for this collection effort. This document will strive to highlight and capture some best practices and issues requiring further study by the U.S. Army Chemical, Biological, Radiological, and Nuclear School and other units deploying to similar operations.

This After Action Report/Improvement Plan covers the public health response in Washington to the disaster in Japan that began with the earthquake off of Japan’s northeastern coast on March 11, 2011. The 9.0 earthquake caused widespread devastation throughout Japan, and the resulting tsunami crippled the nation even further. The Fukushima Nuclear Power Plant, located in Fukushima Prefecture of Japan, was severely damaged by the earthquake and tsunami, creating a radiological disaster. The tsunami from the earthquake also made landfall across the Pacific Ocean including coastal areas of Washington state. The radiological release at the Fukushima Nuclear Power Plant was due to the loss of cooling capability in the reactor cores, causing a partial melt down of nuclear fuel, a buildup of hydrogen gas in containment that had to be vented, and resulting explosions that caused radioactivity from damaged fuel to enter the atmosphere and be carried by the jet stream to the Pacific Northwest. For the state of Washington, responding to potential public health and medical impacts of both the tsunami and radiation issues from the earthquake in Japan culminated in many lessons learned— strengths as well as areas in need of improvement. Those lessons learned are captured in this after action report.

The TEPCO Fukushima Nuclear Power Plant accident was the result of collusion between the government, the regulators and TEPCO, and the lack of governance by said parties. They effectively betrayed the nation’s right to be safe from nuclear accidents. Therefore, we conclude that the accident was clearly “manmade.” We believe that the root causes were the organizational and regulatory systems that supported faulty rationales for decisions and actions, rather than issues relating to the competency of any specific individual.