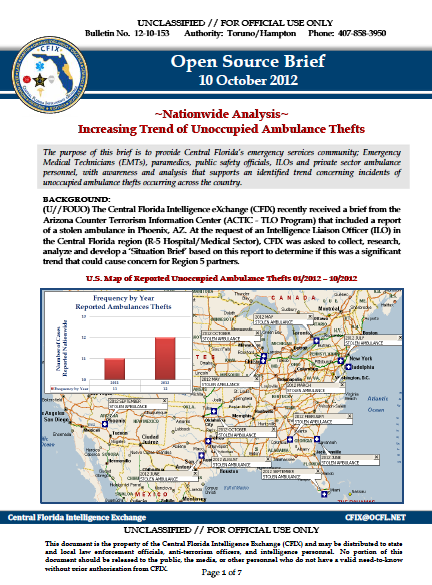 (U//FOUO) The Central Florida Intelligence eXchange (CFIX) recently received a brief from the Arizona Counter Terrorism Information Center (ACTIC – TLO Program) that included a report of a stolen ambulance in Phoenix, AZ. At the request of an Intelligence Liaison Officer (ILO) in the Central Florida region (R-5 Hospital/Medical Sector), CFIX was asked to collect, research, analyze and develop a ‘Situation Brief’ based on this report to determine if this was a significant trend that could cause concern for Region 5 partners.

Chicago, (IL) – On October 09, 2012, a man took off in an ambulance parked in front of a hospital in Berwyn and drove 10 miles before being stopped by police. He stole the ambulance while paramedics assisted hospital staff with a patient. Two paramedics were suspended and may face disciplinary action for leaving the ambulance unattended and the keys inside. (Source: Chicago Tribune)

Tulsa, (OK) – On October 01, 2012, as paramedics were on a medical call at an apartment complex, an intoxicated man jumped in the ambulance and attempted to back up hitting three vehicles. Paramedics pulled him out of the driver’s seat. The man tried to run but paramedics held him until law enforcement arrived. He was arrested and booked into the Tulsa County Jail. (Source: KJRH News)

Phoenix, (AZ) – On September 21, 2012, a 26-year-old female (pictured below) stole an ambulance that was left running in front of a Phoenix hospital. An on-duty reserve officer spotted the ambulance; however, the suspect refused to stop. Officers also tried to negotiate using the ambulance radio. Officers finally stopped her by blocking the roads creating a barricade with their vehicles where she was arrested and taken into custody. (Source: ACTIC)

Monroe County, (FL) – On September 02, 2012, a 22-year-old suspect was arrested and charged after jumping into an ambulance and taking off. Officers spotted and pursued the ambulance that had its lights on but no siren after receiving reports that it was stolen. The suspect admitted to stealing the ambulance to gain attention from law enforcement after she was unable to locate her friend. (Source: Firehouse.com)

Dallas, (TX) – On August 26, 2012, a man stole an ambulance after paramedics left the engine idling as they searched for an injured person in an apartment complex. They never found the 9-1-1 caller and when they returned the ambulance was gone. Police tracked the vehicle back to the suspect, where he was arrested and charged. A pair of crutches and a backpack that did not belong to paramedics were also found inside the ambulance. (Source: dallasnew.com)

[Analyst Comment: Although officials from Dallas have not confirmed if the 9-1-1 caller was the same individual who stole the ambulance, paramedics and EMTs should be vigilant and aware of this activity, to prevent a crime of opportunity from occurring.]

Montgomery County, (PA) – On July 26, 2012, a suspect was caught on dashboard surveillance video (pictured right) after he jumped into an ambulance and drove off as EMTs were preparing to transport a patient to the hospital. Responder lights were still activated as the suspect prompted traffic to move and passed through the red lights. The suspect was able to monitor police transmissions with the radio equipment that was mounted in the ambulance console to avoid law enforcement. Law enforcement later found the ambulance abandoned in an apartment complex parking lot. (Source: ABC News)

Killeen, (TX) – On June 21, 2012, a man was arrested and charged for stealing an ambulance while paramedics were inside a residence responding to an emergency call. Shortly after the paramedics noticed the ambulance missing, the suspect came back to the residence, stepped out and walked away stating he just wanted to take a “joyride” in an ambulance. The suspect was arrested at the
scene. (Source: KWTX.com)

Savannah, (GA) – On June 8, 2012, while under police supervision at a Georgia hospital, a man assaulted a deputy, stole an ambulance and led police on a low-speed pursuit. The suspect struggled with the deputy, attempted to remove a gun from his holster, climbed into an unlocked ambulance and then drove away. The officers attempted to stop the suspect by using stop sticks which flattened three tires, while the ambulance hit vehicles along the way. Patrol cars were also damaged, but no one was injured. (Source: WFMY News)

(U//FOUO) In all of the ambulance theft cases analyzed in this brief, similar pre-incident indicators were identified. All of the documented cases had one or more of the following commonalities:

(U//FOUO) Although the cases included in this brief did not transpire within the Central Florida region, it implies that ambulance thefts could potentially occur in any jurisdiction where hospitals or ambulatory services are present. There are critical vulnerabilities associated with these thefts that could impact the emergency services sector, specifically pertaining to the safety of the public, homeland security concerns and monetary loss.

(U//FOUO) The safety of the traveling public as well as pedestrians could be at risk if a subject takes off in an ambulance, especially when under the influence of drugs or alcohol. In most cases mentioned in this brief, crashes and injuries did occur due to speed and inexperience of the suspect driver. Another consideration is protocols for backup measures for a patient in need of immediate transport or care in the event an ambulance is stolen during a medical emergency. The equipment onboard or transport time may be critical for the patient’s care and may be the difference of a life or death situation.

(U//FOUO) The majority of theft cases involving ambulances typically conclude as an act of criminal behavior, usually involving intoxication. There are concerns however, among counterterrorism authorities that stolen ambulances could be cloned for carrying out terrorist attacks or other criminal/malicious activity. In 2008, for example, a paramedic working the Republican National Convention (RNC) in St. Paul, MN spotted an ambulance with unusual markings. When law enforcement searched the unlocked cloned ambulance, they found a large cache of weapons, as well as bags of urine and feces that potentially could have transitioned into a mass casualty event.

[Analyst Comment: Overseas, terrorists have also used stolen or cloned ambulances to carry out secondary and tertiary attacks as first responders arrive on scene. The threat to carry out similar attacks in the US has been widely discussed on extremist forums.] 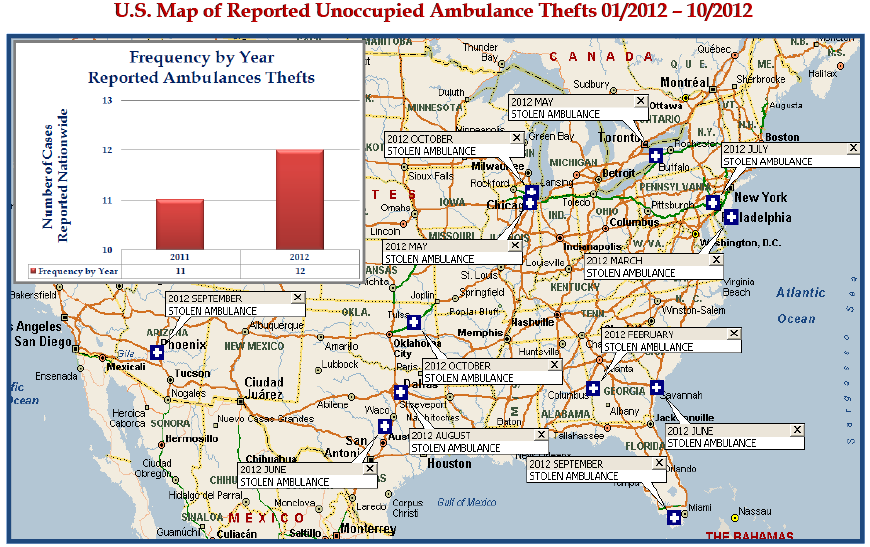