The following document was obtained from the website of the Central Florida Disaster Medical Coalition. 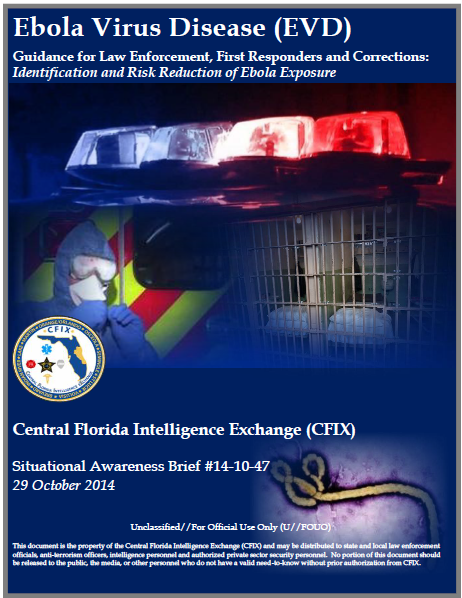 (U//FOUO) The purpose of this brief is to provide law enforcement, first responders, corrections officers, and other personnel who interact with the general public, with guidance and protective measures when coming in contact with individuals demonstrating symptoms of the Ebola Virus Disease (EVD). Personnel who become familiar with the identification of possible exposure, proper response protocols and protective measures will be better prepared to respond, secure, transport and decontaminate to prevent further spread of this deadly disease.

(U) According to the Center for Disease Control (CDC), the 2014 Ebola epidemic is the largest in history, affecting multiple countries in West Africa. The CDC is working with other U.S. government agencies, the World Health Organization (WHO), and other domestic and international partners to prevent further spread of the Ebola virus within the United States.

(U) Law enforcement, first responders, corrections officers, health care providers and personnel who are in close contact with the general public should be familiar with Ebola signs and symptoms, methods of contamination and guidance on handling claims of illness during routine encounters.

(U) The likelihood of contracting Ebola in the United States is low unless a person has direct unprotected contact with the blood or bodily fluids (like urine, saliva, feces, vomit, sweat, and semen) of a person who is sick with Ebola Virus Disease.

(U) Law enforcement, first responders, corrections officers, health care providers and personnel who interact with the general public are at higher risk of coming in contact with an infected individual due to the unique challenges and uncontrolled nature of their work environment. These factors may increase the risk of exposure to blood and bodily fluid during an encounter with a combative subject, or from an ambulatory or custodial transport.

(U) SIGNS AND SYMPTOMS

(U) Symptoms of Ebola may appear anywhere from 2 to 21 days after exposure, although the average is 8 to 10 days. Ebola can only be spread to others after symptoms begin.

(U) Ebola can be spread by direct contact (through broken skin or mucous membranes) with a sick person’s blood, bodily fluids. The virus also can be spread through contact with objects (like clothes, bedding, needles, syringes/sharps or medical equipment) that have been contaminated with the virus.

(U) Immediate identification of symptoms is critical for personnel who are exposed or come in direct contact with a potentially infectious person. 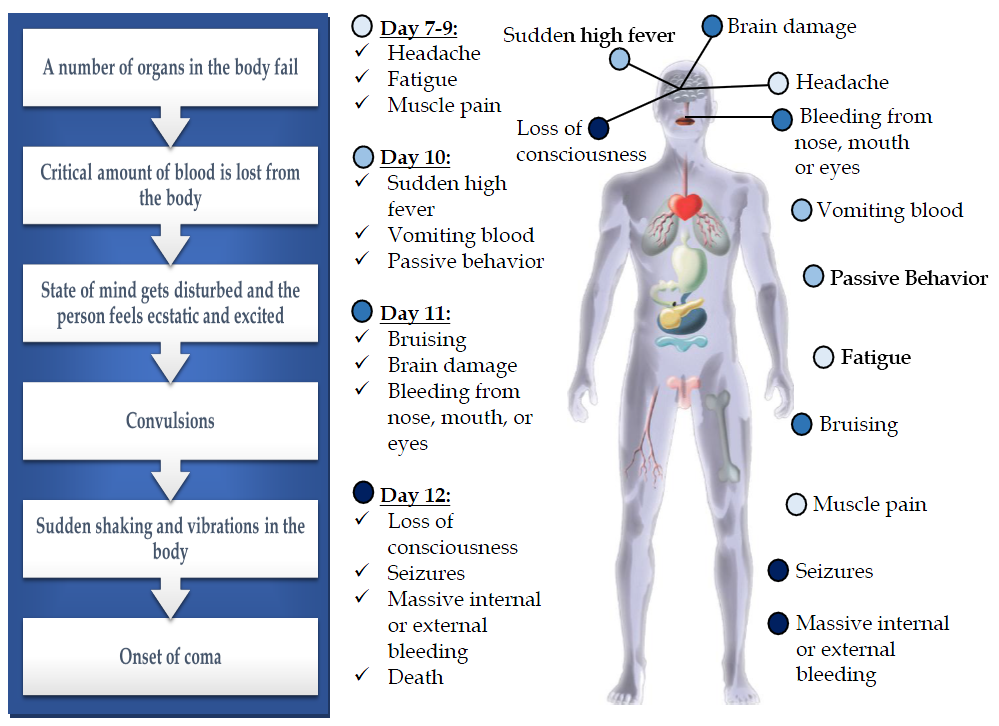