The following document was obtained from a public document sharing site where it had been posted by an unknown user. 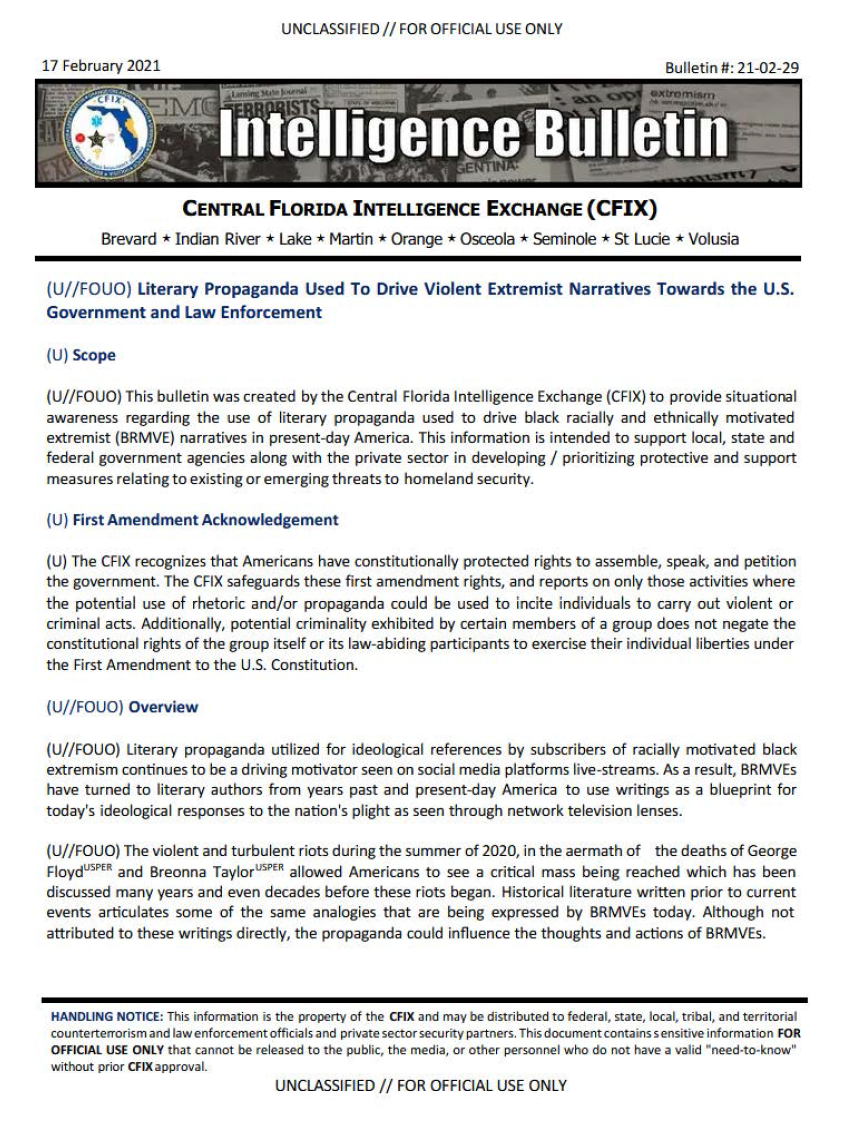 (U//FOUO) This bulletin was created by the Central Florida Intelligence Exchange (CFIX) to provide situational awareness regarding the use of literary propaganda used to drive black racially and ethnically motivated extremist (BRMVE) narratives in present-day America. This information is intended to support local, state and federal government agencies along with the private sector in developing/ prioritizing protective and support measures relating to existing or emerging threats to homeland security.

(U) The CFIX recognizes that Americans have constitutionally protect ed rights to assemble, speak, and petition the government . The CFIX safeguards these first amendment rights, and reports on only those activities where the potential use of rhetoric and/or propaganda could be used to incite individuals to carry out violent or criminal acts. Additionally, potential criminality exhibited by certain members of a group does not negate the constitutional rights of the group itself or its law-abiding participants to exercise their individual liberties under the First Amendment to the U.S. Constitution.

(U//FOUO) Literary propaganda utilized for ideological references by subscribers of racially motivated black extremism continues to be a driving motivator seen on social media platforms live-st reams. As a result, BRMVEs have turned to literary authors from years past and present-day America to use writings as a blueprint for today’s ideological responses to the nation’s plight as seen through network television lenses.

(U//FOUO) In 1969, a lecture was given to house guests by G. Edward Griffin (an American author, and filmmaker) entitled “More Deadly than War: The Communist Revolution in America” which addressed behaviors associated with minority movements. During the lecture Griffin highlight ed numerous literary forms of propaganda which the host believed to be the greatest threat to America. Around the 21:13 mark, Griffin introduced several books of which he stated: “should be in every home library.” Those books are entitled Color, Communism and Common Sense by Manning Johnson, The Crusader by Robert F. Williams, and the November 1968 issue of Political Affairs where the feature article for that month was t he “Right of Black America to Create a Nation” written by Claude Lightfoot.

(U//FOUO) According to Griffin, Lightfoot wrote that the concept of a separate nation must not necessarily be restricted to just one large territory in the south but must be expanded now to include areas in the north updating the basic strategy to reflect present realities. Reading an excerpt of Lightfoot’s text, Griffin reads “We should call for a plebiscite of all black Americans on whether they want to remain in the general Commonwealth or to establish another nation within the continental United States thus the slogan of self -determination today means the struggle for the right of black America to form a nation if it elects to do so .”

(U//FOUO) As t he lecture continues, Griffin mentions that there are two types of revolutions that occur within America which are violent and non-violent revolutions. Examples of Griffin’s claim can be seen in the actions of t hose who participated during the summer 2020 civil unrest, in the online teachings to members of the Not F*cking Around Coalition (NFAC), and Supreme Commander Grandmaster Jay. Griffin mentioned that the opposition in 1969 believed that America’s weakest point lies in the racial differences between the American people and it must be exploited to ensure a successful takeover.

(U//FOUO) Neely Fuller’s writings have been discussed by members of different BRMVE groups, including subscribers using Fuller’s voice in memes associated with characters of a popular animated black sat ire “The Boondocks.” Fuller’s The United Independent Compensatory Code System Concept: A Textbook for Thought, Speech, and/or Action for Victims of Racism (White Supremacy) has been used by BRMVEs to address actions and behaviors as it pertains to racism in America. Additionally, behaviors and mannerisms of mass shooters, such as Micah Xavier Johnson, Omar Thornton, and Gavin Long, align with directives out lined by Fuller in the Maximum Emergency Compensatory Justice (MECJ).